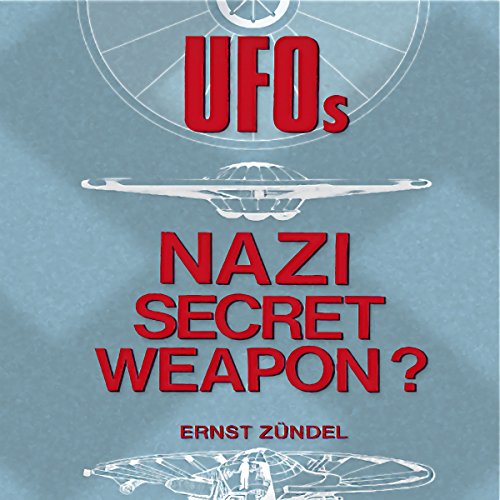 Were UFOs developed by the Nazis? Did Hitler move to war too fast, before his scientists had a chance to develop copies of saucer prototypes developed in Southern Germany, and were these deliberately delayed - by "good" Germans and Allied spies - for humanitarian reasons?

This and more can be found in this audiobook by Ernst Zundel, the infamous "holocaust denier" who, like so many agent-provocateurs, released solid information, only to see that information "smeared" - by chance or by design - by their own personal failings.

This audio examines Operation Highjump (the Antarctic Nazi base), Hitler's drive to produce various types of UFOs, and discusses the need for "Disclosure". The material is thought-provoking, and gives credence to the Nazi development of flying saucers.

UFOs: Nazi Secret Weapons? has been banned in dozens of countries, with the author claiming he has been held as a political prisoner for the last quarter of a century. The author hints at a possible connection between the appearance of UFOs in large numbers and Hitler's escape from Berlin.

The startling dossier assembled here has been much-copied in the decades since it was written (1974), with other authors claiming to have discovered this material. However, it was Zundel who first gathered the data and presented it to the world - probably to his everlasting regret.

UFOs: Nazi Secret Weapons? is a must-have for serious UFO researchers as well as collectors of saucer memorabilia.

A really plausable narrative of what really occurred when the Russians and allies took Berlin.

an anti-Semitic rant, not about ufos

this is horrible? it has nothing to do with UFOs, it sounds like an anti-Semitic rant against the jews. How dare you have this on amazon! False advertising!!!