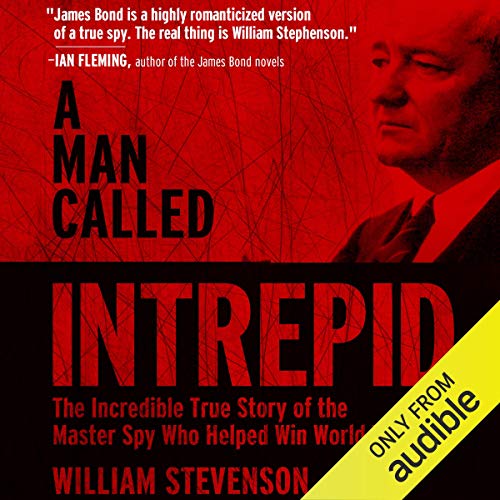 By: William Stevenson
Narrated by: David McAlister
Try for £0.00

The classic real-life story of the superspy whose vast intelligence network helped defeat the Nazis in World War II.

A Man Called Intrepid is the account of the world’s first integrated intelligence operation and of its master, William Stephenson. Codenamed INTREPID by Winston Churchill, Stephenson was charged with establishing and running a vast, worldwide intelligence network to challenge the terrifying force of Nazi Germany. Nothing less than the fate of Britain and the free world hung in the balance as INTREPID covertly set about stalling the Nazis by any means necessary.

First published in 1976, A Man Called Intrepid was an immediate bestseller. With over thirty black-and-white photographs and countless World War II secrets, this book revealed startling information that had remained buried for decades. Detailing the infamous Camp X training center in Ontario, Canada; the miraculous breaking of the Ultra Code used by the Enigma Machine; and dozens of other stories of clandestine missions, A Man Called Intrepid is an undisputed modern classic.

What listeners say about A Man Called Intrepid

A fascinating and throughly interesting account of WW II secret operations and historical background to the major events of the time.

Having now listened to so Many WW2 books, I wonder what else there is to hear, but this contained some well researched information and was very interesting. I enjoyed the reader, the voice kept me engaged all the way through.

The book gives a tremendous insight into the Second World war, the politics and the invaluable part played by the UK and US Intelligence community. It is a really interesting story ruined by a narrator who's monotone attempts at reading simple English bored me to the point of distraction. I had to keep rewinding because I had drifted off!
I think on this occasion it would have been better to buy the book.

A real 5 star book. eye opening and required reading for anyone with an interest in ww2 or 20th century intelligence services. Well narrated

How can you make such a cool topic so boring.

I'm sorry, maybe it's just me, but this book was so boring. It had such potential of a cool story of a World War II spy, but it was very boring to me and the British accent was a little bit too much.

William Stevenson, or little Bill as he is referred to in this book (to compare him with big Bill, William Donovan) ran the British spy network in the US during World War II. This book is the unmasking of much that happened during that time and there are some fascinating stories included within its covers.

Mr Stevenson is one of those relatively unknown heroes who made the winning of the war by those other heroes, the US, British, Canadian, Austrialian, French, Russian and other soldiers and sailors doing the fighting, those living through the daily bombing in the UK, those whose loved ones were risking life and limb on battlefields and those in occupied territory who had to live under the Nazi tyranny, possible. I have no doubt that we are all indebted to him and all of spies those like him who help win the war.

The problem is that one has to wonder if some of the information included in the book is accurate. This book was published in 1976 so it is not new, but some of the information included is at variance with histories of this period that are being written now. It is reasonable to think that the events described in this book, if accurate, would be cited in the new books and used to revise what is currently being written. For example ...

The most inflammatory event described is the Nazi bombing of Coventry. My Stevenson says that Winston Churchill knew the destination of the bombing raid and did nothing to warn those living in Coventry in order to protect the Ultra secret. I remember when, back in 1976, I first heard of this and I certainly believed it. It is one of those stories that seems to perfectly capture the terrible choices that people in power have to make. The only problem is that today historians are still saying that there is no evidence that this is true and, in fact, many of those involved in war planning have said very openly that it is not true and point to both historic actions and events to prove that the story is not true. Very few historians credit the story.

Another example concerns the Dieppe raid which Mr Stevenson says was not planned and executed for the purpose stated but was rather for another purpose all together and served as a distraction for that true purpose. Perhaps that is true, but no other historian writing about this event today that I have read credits that story either.

Included are descriptions of other events which have the feel of truth and are backed up by current histories of the period - the escape of the physicist Niels Bohr, the attack on the plant that supplied Germany with heavy water for their atomic experiments and the British involvement with undermining and exposing political opponents of Roosevelt's actions prior to the US entry into the war. So the book seems to me to be a mixed bag. One truly annoying omission in the book comes from the statement that the Ultra secret was guarded so closely that only 20 Allied military officers knew it. I hoped, in vain, that those people would have been identified. And interestingly enough while Mr Stevenson describes the breaking of the Japanese diplomatic code by William Friedman, he makes no mention of the breaking of the Japanese Naval codes by Commander Rochefort.

The narration was a disappointment for me. Mr McAlister's reading is hesitant and thus hard to follow at some points in the book. His pronunciation of some people's names seemed odd and at variance with common usage today. It is a history and is perhaps a bit dry as read and I can only wonder what it might have been like had it been read by someone like Grover Gardner.

This is a spectacular story, but the narration is painful to listen to. The narrator’s style results in some sentences being randomly strung together, and others being completed mid sentence! It seems as though he decided to move all of the periods around on each page to locations that suited his fancy.

One of THE most important works about WWII

This work is indispensable to building a fuller understanding of WWII. It fills in many gaps that more standard combat and political histories leave open, often unwittingly.

My one gripe about the book is that it is extremely anti-Chamberlain and just as extremely pro-Churchill. Not to take away one iota from Churchill, but Chamberlain's cursed "appeasement"--and Stevenson does pretty much use it as a curse word--is condemned time and again with only a very glancing acknowledgement that Britain was not ready for war before 1939. Furthermore, Stevenson gives not even a nod to the fact that Chamberlain's government oversaw the building up of the RAF, the establishment of the Chain Home series of radar stations, and the centrally controlled communications network of Fighter Command, all of which were essential to winning the Battle of Britain. In short, the appeasement of Hitler bought essential time for Britain to prepare.

That gripe aside I found the book absolutely riveting from beginning to end and recommend it highly and without hesitation.

Great book! A blast from the past

I recommended this book to Audible. I loved it when it came out in the 1970s. I've read many books on this topic since then. But this is still the best.

This is one of the best. We all know about the WWII big events, but this book covers the details of the undercover events that supported those big events. It's a must read!

Where does A Man Called Intrepid rank among all the audiobooks you’ve listened to so far?

The most interesting book I have read about ww2 history. It reveals the story behind the ordinary wartime history.

This book is not about one spy. It tells the story about the british spy network and its operations during the war.

What does David McAlister bring to the story that you wouldn’t experience if you just read the book?

David McAlister read in a very clear and "dry" stryle very well suited to the story.

I felt I for the first time had been told the true story and hidden connections behind all the events I studied for my degree in history 40 years ago.

Read this book before you read any other book about ww2. It nay save you a lot of misunderstanding of the events.

WWII - behind the scenes. I was deeply moved by the sacrifice from do many who just did what needed to be done. And disgusted by those whose shortsightedness and self centered nature were unwilling to do what was best and right. I have the deepest gratitude and admiration for the thousands of unsung Heroes who saved the world.

One of my favorite books

I am not a voracious reader yet this book i have read twice, once in 1979 and the other this week. I have been recommending this book to everyone who has an interest in WWII. This is a great resource to study and writing about WW2. It can be the basis of sooooo many other stories of the lives and deaths of brave selfless ordinary people who sacrifices there lives to fight tyranny.

Heavy on detail and facts

What did you love best about A Man Called Intrepid?

There is so much history here, and the attitude of appeasement that so many of Europe's leaders held appear so foolish when viewed from our vantage point. So much carnage could have been avoided if those leaders - Chamberlain and his contemporaries in France and other European countries had just stood up to Hitler. He had laid out his philosophy in Mein Kampf for anyone to see - but too many did not take him seriously. Reminds me a little of what radical Islam is saying and we don't seem to take them seriously either. I felt as if I were somehow reading a warning to us while reading this book.

What was one of the most memorable moments of A Man Called Intrepid?

The intelligence operations in Yugoslavia and Bermuda.

It's not possible to listen to the entire book all in setting.

I think this book should be required reading for all high school and college history classes.