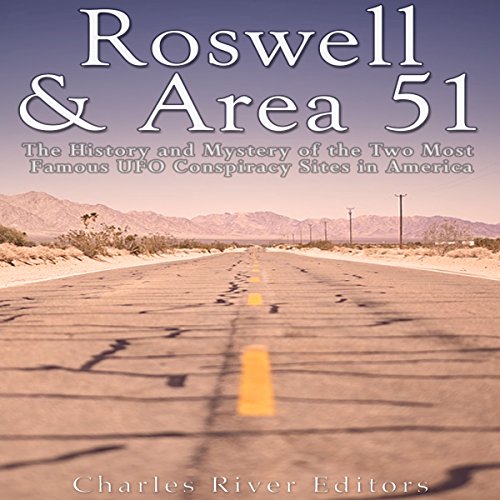 The History and Mystery of the Two Most Famous UFO Conspiracy Sites in America
By: Charles River Editors
Narrated by: David Zarbock
Length: 2 hrs and 31 mins
Categories: History, 20th Century
4 out of 5 stars 4.0 (1 rating)

The essence of the event commonly known as the Roswell Crash is that someone saw something in the sky during the summer of 1947. Days later someone else found some odd foil, paper, and wood on the grounds of a ranch in the New Mexico desert nearly a hundred miles from Roswell. A day or two after that, the debris was taken to a military airbase in Roswell, New Mexico, where it remained overnight before the military flew it to another airbase in Ohio. The story of the Roswell Crash tends to focus on New Mexico, not on the traveling debris found on the ground. Ironically, the Roswell Crash never happened in Roswell. That's not to say there was no 1947 crash. Something did appear on the ground that appeared to have come from the sky - but it wasn't found anywhere near Roswell. Part of what was found was eventually moved to the airbase in Roswell where it remained overnight, inspiring the name the Roswell Crash.