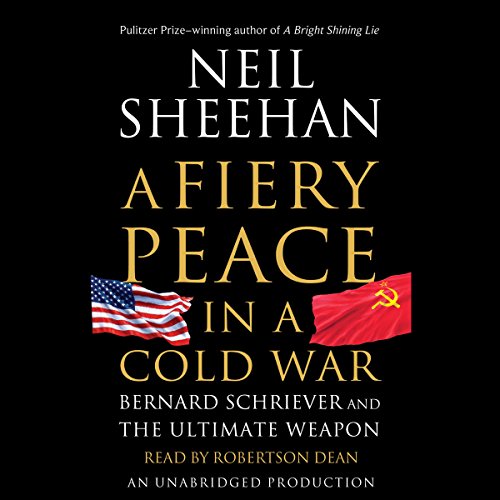 A Fiery Peace in a Cold War

A Fiery Peace in a Cold War

From Neil Sheehan, author of the Pulitzer Prize - winning classic A Bright Shining Lie, comes this long-awaited, magnificent epic. Here is the never-before-told story of the nuclear arms race that changed history - and of the visionary American Air Force officer Bernard Schriever, who led the high-stakes effort. A Fiery Peace in a Cold War is a masterly work about Schriever's quests to prevent the Soviet Union from acquiring nuclear superiority, to penetrate and exploit space for America, and to build the first weapons meant to deter an atomic holocaust rather than to be fired in anger.

Sheehan melds biography and history, politics and science, to create a sweeping narrative that transports the reader back and forth from individual drama to world stage. The narrative takes us from Schriever's boyhood in Texas as a six-year-old immigrant from Germany in 1917 through his apprenticeship in the open-cockpit biplanes of the Army Air Corps in the 1930s and his participation in battles against the Japanese in the South Pacific during the Second World War. On his return, he finds a new postwar bipolar universe dominated by the antagonism between the United States and the Soviet Union.

Excellent discussion of the life, times, and impact of Gen Schriever on the US Air Force and the delicate strategic balance of the 20th century's superpower standoff.

Interesting twists and turns in the lives of those who founded the US nuclear rocket program. Slow and tedious at times, even a bit long. Excellent information and good historical references. I recommend this to other AF officers who think innovation is dead.

The story is masterful and fascinating. The production of the performance has numerous mispronounciations of names and locations. Further, the organization central to the Air Force's nuclear force, the Strategic Air Command, was known quite widely as SAC ("sack") for short. The reader constantly refers to it as ESS-AY-CEE, which was very distracting. He is an excellent reader...this is a production issue.

This is a good book. I'm not disappointed I bought it, and I recognize that I am a perfectionist when it comes to pronunciation. But of all things, you would think that the name of the central figure would be pronounced correctly. His name is General Bernard Adolph Schriever, mispronounced throughout as Shriver, rhyming with diver. As in Sergeant Shriver. Be prepared to hear it mispronounced at least 600 times.