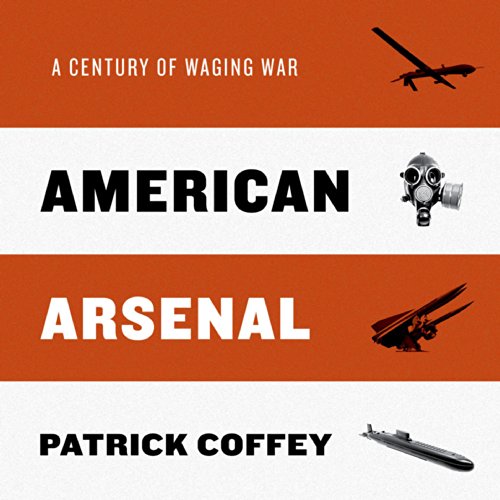 A Century of Waging War
By: Patrick Coffey
Narrated by: Dennis Holland
Length: 11 hrs and 18 mins
Categories: History, Americas
5.0 out of 5 stars 5.0 (1 rating)

When America declared war on Germany in 1917, the United States had only 200,000 men under arms, a 20th of the German army's strength, and its planes were no match for the German air force. Less than a century later, the United States today has by far the world's largest military budget and provides over 40% of the world's armaments.In American Arsenal Patrick Coffey examines America's military transformation from an isolationist state to a world superpower. Focusing on 15 specific developments, Coffey illustrates the unplanned, often haphazard nature of this transformation, which has been driven by political, military, technological, and commercial interests. Beginning with Thomas Edison's work on submarine technology, American Arsenal moves from World War I to the present conflicts in the Middle East, covering topics from chemical weapons, strategic bombing, and the nuclear standoff with the Soviet Union, to "smart" bombs, hand-held anti-aircraft missiles, and the Predator and other drone aircrafts. Coffey traces the story of each advance in weaponry from drawing board to battlefield, and includes fascinating portraits of the men who invented and deployed them:

Coffey also examines the increasingly detached nature of modern American warfare - the ultimate goal is to remove soldiers from the battlefield entirely - which limits casualties (211,454 in Vietnam and only 1,231 in the Gulf War) but also lessens the political and psychological costs of going to war. Examining the backstories of every major American weapons development, American Arsenal is essential listening for anyone interested in the continuing evolution of the U.S. defense program.

What listeners say about American Arsenal

The author tells the story of the deeply flawed men who doomed the 20th century and whose hubris haunts us even now. With the threat of large scale war on the rise this book is more relevant now than at publication.