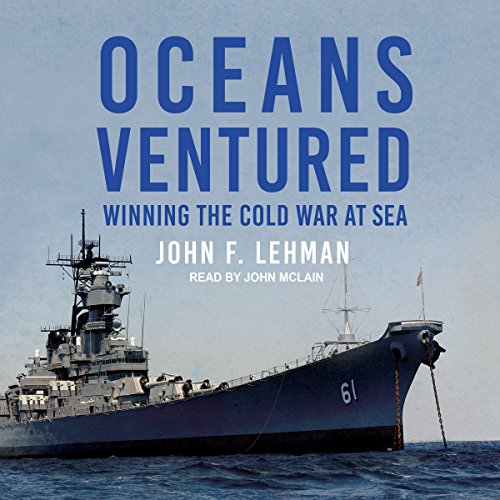 When Ronald Reagan took office in January 1981, the US and NATO were losing the Cold War. The USSR had superiority in conventional weapons and manpower in Europe and had embarked on a massive program to gain naval preeminence. But Reagan already had a plan to end the Cold War without armed conflict.

Reagan led a bipartisan Congress to restore American command of the seas by building the Navy back to 600 major ships and 15 aircraft carriers. He adopted a bold new strategy to deploy the growing fleet to northern waters around the periphery of the Soviet Union and demonstrate that the NATO fleet could sink Soviet submarines, defeat Soviet bomber and missile forces, and strike aggressively deep into the Soviet homeland if the USSR attacked NATO in Central Europe.

New technology in radars, sensors, and electronic warfare made ghosts of American submarines and surface fleets. The US proved it could effectively operate carriers and aircraft in the ice and storms of Arctic waters, which no other navy had attempted.

The Soviets, suffocated by this naval strategy, were forced to bankrupt their economy trying to keep pace. Shortly thereafter the Berlin Wall fell, and the USSR disbanded.

What listeners say about Oceans Ventured

A point by point history of Reagan era Naval War games. There are some interesting and fun anecdotal stories mixed in but 98% is dedicated to the facts and figures of these exercises. I'm a cold war history buff and it was even a little much for me. The geopolitical strategy behind the build up and aggressive posturing is interesting but can be explained in 10 pages.

Great book, not a great reading.

It’s a great story and there are pertinent lessons to be learned from this experience. As you might expect, the book contains a number of acronyms and other niche words (e.g. littorals) that are rarely used outside this context. As someone from this world, I know how these words are traditionally pronounced. The reader did not and I found this very distracting as I tried to deduce through context which word he meant. And then I bought the book just to be sure. I shouldn’t have to do that. The reader should know or ask for help.

It's hard to believe that anyone purposefully talks like this! John McLain's smarmy and oleaginous reading style leaves you just feeling gross. It's hard to really absorb the content, when every 20 seconds you cringe from some over-the-top style of reading the sentence. Just awful.

The exciting history of the 1980s Navy

Today (2021) we still have hints of the late Cold War navy in service. The cruisers and destroyers, the sea wolf class submarines, the modern aircraft carrier fleet. Yet all of this would not have been if it were not for the Reagan build up. Years of over burden from Vietnam operations and failed policies of the Carter administration made the navy a shell of its once great self.

Regan, Lehman, and the Officers and enlisted of the 1980s changed everything. Not just equipment but policies, aggressiveness and morale. This book is an excellent source for an underserved era in Naval History. You won’t be disappointed.

Thoroughly enjoyed every minute of this book.

Great read. The geopolitical aspects of a fleet and it's conops is truly an art form, and Secretary Lehman does an amazing job explaining that to the reader/ listener. I couldn't help but think how relevant this is today in our world.