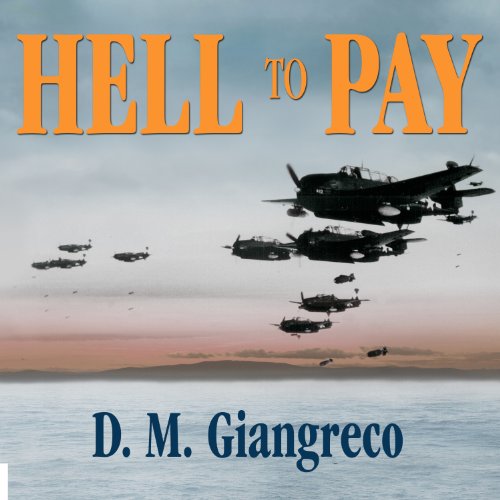 Hell to Pay is a comprehensive and compelling examination of the many complex issues that encompassed the strategic plans for the proposed American invasion of Japan. U.S. planning for the invasion and military occupation of Imperial Japan began in 1943, two years before the dropping of atom bombs on Hiroshima and Nagasaki.

In its final form, Operation Downfall called for a massive Allied invasion - on a scale dwarfing D-Day - to be carried out in two stages. In the first stage, Operation Olympic, the U.S. Sixth Army would lead the southernmost assault on the Home Island of Kyushu preceded by the dropping of as many as nine atom bombs behind the landing beaches and troop concentrations inland. Sixth Army would secure airfields and anchorages needed to launch the second stage, Operation Coronet, five hundred miles to the north in 1946. The decisive Coronet invasion of the industrial heartland of Japan through the Tokyo Plain would be led by the Eighth Army, as well as the First Army, which had previously pummeled its way across France and Germany to defeat the Nazis.

These facts are well known and have been recounted - with varying degrees of accuracy - in a variety of books and articles. A common theme in these works is their reliance on a relatively few declassified high-level planning documents. In contrast, Hell to Pay examines the invasion of Japan in light of the large body of Japanese and American operational and tactical planning documents unearthed by the author in both familiar and obscure archives, as well as postwar interrogations and reports that senior Japanese commanders and their staffs were ordered to produce for General MacArthur's headquarters.

Hell to Pay brings to light the political and military ramifications of the enormous casualties and loss of material projected by both sides in the climatic struggle to bring the Pacific War to a conclusion through a brutal series of battles on Japanese soil.

"A chillingly clear-eyed picture of a battle of attrition so daunting that Army Chief of Staff George C. Marshall considered using atomic and chemical weapons to support the operation." ( Publishers Weekly)

This is a good piece of history.

Probably one of the least likely, or perhaps, least interesting subjects to delve in to concerning the Second World War. This books discusses contemporary perceptions, and the reality of the projected Invasion of Japan. That is important as it can frame the discussion of the US decision to use Atomic weapons against Japan. This has been dealt with in other sources, and from many perspectives. I find this a very well researched volume, using both American and Japanese sources. He may not have spent enough time discussing one of the more bizarre acts of the war, which was a partial demobilization following the defeat of Germany. He does cover the impact of that decision on the War against the Japanese quite well. This book is not speculative in nature, he looks at contemporary estimates, including how they were produced. He uses evidence from other battles against Japan (the Philippines, Saipan, Peleliu, Okinawa, etc.) to give perspective to the estimates, and context for the larger American and Japanese battle plans. Certainly, I walk away with even more respect for the Japanese, and I have a better idea of the size of the Japanese Armed Forces, at the time of the Invasion. This didn't change my mind on the use of Atomic weapons. It did remind me further of the naivete of the Americans regarding radiation given the tactical planning for the employment of further atomic weapons. I am glad that didn't happen, both for the Japanese, and for those American soldiers as well. A very interesting book. The appendix is quite dry, but still worth reading.

This book describes a part of military history that is interesting, important and not adequately covered by other books. Nonetheless, the book is a bit tedious to get through due to both its organization (meandering) and its narration (humdrum). This would be an excellent book if it were half the length and reorganized.

tons of great info, but not the best format

the book is chuck full of facts, figures, strategies, documents, maneuvers, hypothesis etc. the problem is that a book is just not the best place for it all, a video documentary series would be a much better format so all the states could be visually supported

This is a very detailed, no a precise accounting of the planning, and preparation for the American invasion and the defense by Imperial Japan of the home islands during the Summer of 1945.

This book lays to rest the long standing supposition that the Japanese Empire was going to surrender before the dropping of the Atomic Bombs.

So far as I can see from the five or so hours I listened (IE, before deleting it...), this entire book is nothing more than a stupifyingly tedious recitation of US military casualty and replacement figures in incredibly elaborate - and totally pointless - detail. It was like listening to someone read down the balance sheet and income statement spreadsheets of a large corporation.

Not merely boring, it was downright dangerous - threatening to put me to sleep in traffic during the afternoon commute.