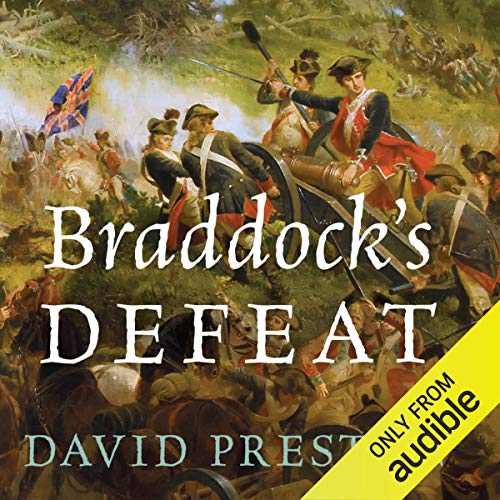 On July 9, 1755, British and colonial troops under the command of General Edward Braddock suffered a crushing defeat to French and Native American enemy forces in Ohio Country. Known as the Battle of the Monongahela, the loss altered the trajectory of the Seven Years' War in America, escalating the fighting and shifting the balance of power. An unprecedented rout of a modern and powerful British army by a predominantly Indian force, Monongahela shocked the colonial world - and planted the first seeds of an independent American consciousness. The culmination of a failed attempt to capture Fort Duquesne from the French, Braddock's Defeat was a pivotal moment in American and world history. While the defeat is often blamed on blundering and arrogance on the part of General Braddock - who was wounded in battle and died the next day - David Preston's gripping new work argues that such a claim diminishes the victory that Indian and French forces won by their superior discipline and leadership. In fact the French Canadian officer Captain Beaujeu had greater tactical skill, reconnaissance, and execution, and his Indian allies were the most effective and disciplined troops on the field. Preston also explores the long shadow cast by Braddock's defeat over the 18th century and the American Revolution two decades later. The campaign had been an awakening to empire for many British Americans, spawning ideas of American identity and anticipating many of the political and social divisions that would erupt with the outbreak of the revolution. Braddock's Defeat was the defining generational experience for many British and American officers, including Thomas Gage, Horatio Gates, and, perhaps most significantly, George Washington. A rich battle history driven by a gripping narrative and an abundance of new evidence, Braddock's Defeat presents the fullest account yet of this defining moment in early American history.

What listeners say about Braddock's Defeat

Preston has written a great American history book about a well-known but completely misunderstood battle in the environs of today's Pittsburgh (not yet Pittsburgh). It is fast paced, well-narrated, does not presuppose a deep familiarity of the French-Indian War (but nevertheless does not bore & never fails to surprise those of us familiar with it). The work is especially strong in the run-up to the battle, both on the French side & the British/colonial. I bought the actual book for a relative. It is filled with many pictures, illustrations and maps. I found it very helpful to browse through the old-fashioned book a couple of times while in the course of listening. The audio version does not lack, but any military piece like this one is always clarified by having the maps.

Butchered French words like they were redcoats on the Monogehela

mispronounced most French place names and a few of the people's names. But the history itself is excellent

Excellent read. It’s a legitimate shame that Americans generally know very little about this part of our own history. A must read to truly understand American history.

Have read much about the revolution and this account of Braddock's journey adds to the depth of the struggle for the Americas by natives and foreigners alike, laying additional layers to the conflict and lives of those who lived during this epoch. This story was well told and the performance was in line with the sober subject.

A Colonial history must listen

While it could drone on from time to time, Braddock’s Defeat expertly lays out the causes, effects, and minutiae of the most significant Indian victory over European forces in colonial American history. Good narration as well.

David L Preston's re-examination of General Braddock's shocking defeat in 1755 is a masterpiece of historical research. In addition, the mesmerizing and smooth narration by Michael Quilan makes for the perfect complement in creating one of the great historical works of our time. Excellent. Entertaining. Scholarly.

before reading this book I only knew about the Battle of the Monongahela and references to George Washington and the beginnings of his military career. And though my family it's from Pittsburgh I did not really understand the context of the importance of that battle and the influence it had not just on the French and Indian war not just on the seven years war But ultimately on the revolutionary war. this book does a phenomenal job of capturing the many different perspectives of the British or French Native Americans the colonists. the literal road that was traveled to get even to the battle captured my attention in a way that actually created anxiety as I heard the story unfold. this is just a wonderful book that is an absolute must read to put in the context the birth of our country and military tactics distill apart of wars and conflicts.

Really great history of the French and Indian war, the military and strategic aspects of Braddock's mission, and its importance to the future of America. Near ration is very dry and monotone and makes this difficult to get through. I think I would've enjoyed the book more.

Excellent Account of a Little Known But Imprtant B

This is a first class look at an important battle during the French and Indian war. George Washington no doubt learned a great deal from his role as a colonial officer in the British Army. The French, who fought as irregulars with their Huron and Iroquois allies, routed the superior British invading force, while killling and torturing many British and Colonial troops. Washington later made good use of colonial irregulars in the Revolutionary War.