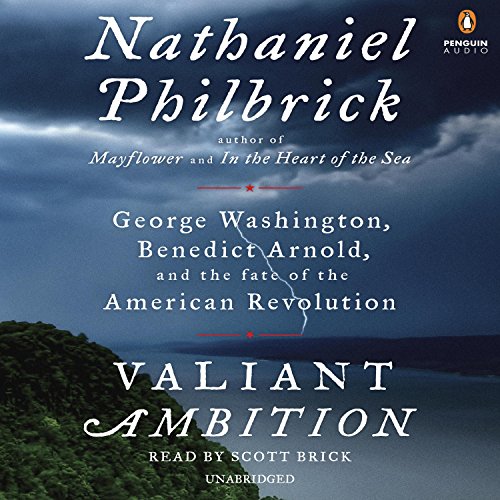 A surprising account of the middle years of the American Revolution and the tragic relationship between George Washington and Benedict Arnold, from the New York Times best-selling author of In the Heart of the Sea, Mayflower, and In the Hurricane's Eye.

"May be one of the greatest what-if books of the age - a volume that turns one of America’s best-known narratives on its head.” (Boston Globe)

"Clear and insightful, it consolidates his reputation as one of America's foremost practitioners of narrative nonfiction." (Wall Street Journal)

In September 1776, the vulnerable Continental Army under an unsure George Washington (who had never commanded a large force in battle) evacuates New York after a devastating defeat by the British army. Three weeks later, near the Canadian border, one of his favorite generals, Benedict Arnold, miraculously succeeds in postponing the British naval advance down Lake Champlain that might have ended the war. Four years later, as the book ends, Washington has vanquished his demons, and Arnold has fled to the enemy after a foiled attempt to surrender the American fortress at West Point to the British. After four years of war, America is forced to realize that the real threat to its liberties might not come from without but from within.

Valiant Ambition is a complex, controversial, and dramatic portrait of a people in crisis and the war that gave birth to a nation. The focus is on loyalty and personal integrity, evoking a Shakespearean tragedy that unfolds in the key relationship of Washington and Arnold, who is an impulsive but sympathetic hero whose misfortunes at the hands of self-serving politicians fatally destroy his faith in the legitimacy of the rebellion. As a country wary of tyrants suddenly must figure out how it should be led, Washington's unmatched ability to rise above the petty politics of his time enables him to win the war that really matters.

"This fascinating audiobook is further lifted by narrator Scott Brick's impressive performance.... The times and the men, after all, combined for high drama. Brick's rendition captures it well." ( AudioFile)

Fantastic book that every American should read

I loved everything about Valiant Ambition. Other biographical or historical accounts of the Revolutionary War tend to be dull, lifeless, academic affairs. This book brings the characters and stories of the Revolution to life in a vibrant way. From Washington to Arnold to all the men and women around them, the book breathes life into names and places that are not done justice by drier histories or accounts. Valiant Ambition succeeds in capturing the desperation of the war, and it even succeeds in making some deeper political and philosophical points. It is, put simply, the best book on George Washington, Benedict Arnold, and the Revolutionary War I've ever read.

The narrator is also excellent, making this already engrossing book darn near dangerous. Be warned: You won't be able to stop once you press play.

A Great Book That Lacks a Conclusion.

I loved hearing the other details of Benedict Arnold's rise and fall and an insider's view on the Rev. War. But, the author should have gone into more detail of what happened after the treason was discovered. What happened to Arnold in the British Army, and the massacre that he unleashed on the Continentals. What about after the war? It just ends without even talking about the end of the war, what happened to Arnold and his wife, kids. It's like the author got tired of writing, then just quit.

Not his best Work...

I had been waiting patiently for another book by Philbrick, hoping for another classic to add to my book shelf/audio collection. I've read them all, and I generally like what he writes about and how. This one just didn't keep me interested. Oh, I finished it but I didn't feel like the story was as fulfilling as I had hoped.

Philbrick does an excellent job providing the reader/listener with all the history of how Benedict Arnold came to be, and does a pretty good job explaining the backstory on how he turned on his country and why, but he does so in such a (I thought) dull way, that I never really sat on the edge of my seat waiting for the next turn of events. The story just wasn't very exciting.

Don't take my word for it, try it for yourself, and maybe you'll have a different/better take. I just hope his next book will keep my attention.

The Founding Fathers in Three Dimensions

George Washington. Without question the indispensable man, but a man non-the-less, with flaws and blind spots as well as towering strength and character.

You think Congress is dysfunctional now? This book will give you some perspective. Washington rose above it and fathered a republic. Benedict Arnold allowed the same Congress to drive him into becoming a synonym for traitor. The story of why is fascinating.

A deeper insight into the American revolution

The Other Side of a Forgotten Hero

What did you love best about Valiant Ambition?

The book dispels the kneejerk reaction posed by the name: Benedict Arnold

What was one of the most memorable moments of Valiant Ambition?

Arnold's triumph over adversity becomes a metaphor for valor. No promotion, bankrupt, outmaneuvered, far from home, mis-guided by early Washington...he fought on with brilliance.

Of course Philbrick wrote a well researched, honest book about the personalities and events of the American Rev War, that's why my copy was confiscated by a former re-enactor and I bought myself an Audible copy. Originally, I won a hardcover through Goodreads Giveaways.
As expected, it is also well written and can be assimilated and understood by most. Usually, there is little time spent on the motivations of turncoats, but this book rectifies that in the case of Arnold. Obviously, I consider it a very worthwhile read, and do not hesitate to recommend it.
The audio is narrated by Scott Brick, who is well known for his excellent narrations.

Benedict Arnold was a traitor but also a man who initially fought bravely and gallantly for America. He was arrogant and self-serving but was initially willing to risk his life for his country and the men he led. The book simply ended with his defection and a brief mention of a bloody battle. Personally I would have liked more details on his eventual move to England and what became of his wife and two boys. The downside for me was the narration by Scott Brick.

Good research. Interesting history that I wasn’t aware of, but sometimes too much detail. Since Philbrick used (and credited) so many historical sources, I expected a more academic, nuanced take. However, I found instead that the author seemed rather opinionated and to have drawn conclusions about individual’s motives and mental states that could only be conjectures.

Excellent content and backgrounds of two great warriors in American history. Narration was great too.