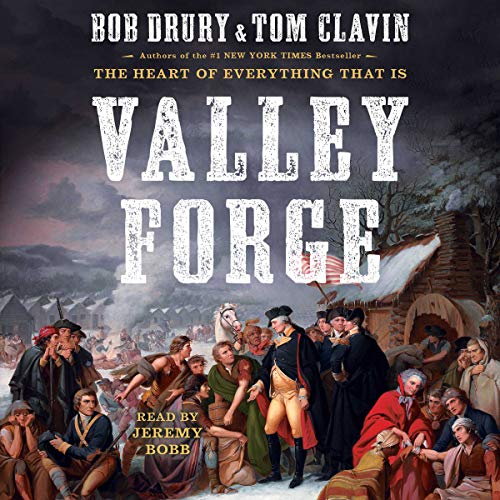 The number-one New York Times best-selling authors of The Heart of Everything That Is and Lucky 666 return with an unforgettable and perhaps the most underappreciated chapter in American history - the inspiring, pause-resisting account of Valley Forge, the Continental Army winter camp where George Washington turned the tide of the American Revolution.

On December 19, 1777, some 12,000 members of America’s nascent Continental Army staggered into Valley Forge, Pennsylvania, a small encampment 23 miles northwest of British-occupied Philadelphia. The starving and half-naked force was reeling from a string of demoralizing defeats at the hands of the King George III’s army and barely equipped to survive the coming winter. Their commander in chief, the focused and forceful George Washington, was at the lowest ebb of his military career. With the Continental Congress in exile and its treasury depleted, the American Revolution appeared lost.

As the days and weeks passed, however, Washington embarked on a mission to transform his troops from a bobtail army of citizen soldiers into a professional fighting force. Keeping a wary eye out for a British attack, he was aided by a trio of homegrown generals as well as a young coterie of American advisors and foreign volunteers led by Alexander Hamilton, John Laurens, and the Marquis de Lafayette. Within six months, Washington had achieved his miracle.

Valley Forge is the riveting true story of an underdog US toppling an empire. Using new and rarely seen contemporaneous documents - and drawing on a cast of iconic characters and remarkable moments that capture the innovation and energy that led to the birth of our nation - the New York Times best-selling authors Bob Drury and Tom Clavin provide a breathtaking account of this seminal and previously undervalued moment in the battle for American independence.

"Jeremy Bobb is a steady, highly skilled narrator who is reminiscent of David McCullough in the straightforwardness of his delivery. His calm steadiness will carry even the most fainthearted listener through passages that are unavoidably bleak while conveying the steely determination that was at the heart of the American Revolution." (AudioFile)

Moving story about saving the Revolution

Valley Forge is known for its deprivations in the winter of 1777 to 1778. What about the characters drawn to it, people with odd talents and motivations? You'd almost think the VIP cast members provided entertainment value for the troops, if not for starvation, disease and suffering. And then Friedrich Wilhelm Von Steuben shows up with a surreal entry. Guarantee it - you'll be hooked, no matter you've been warned.

Von Steuben, a disgraced, former Prussian military officer, known to be homosexual, got a resume makeover by top revolutionary officials in the know. He was uniquely capable of making George Washington smile and laugh, and besides, his military talents were critical and nobody else in the Continental Army had them.

This book shows how the tide was turned - when it happened and why. King George III was forced into a change of mission and strategy. Interestingly, the local population around Valley Forge were the first ones to display a change in sentiment. This book breaks new ground, and the narrator turned in an outstanding performance.

A joy to read

Very well researched and written. I listened to the excellent audio production every chance I got and was sad when it ended. Even non-history buffs will enjoy this book.

meaning for inside to critical history.

I've read many books about the nation's founding and those who participated. Therefore, much of this was review, but it was made worthwhile through unique inside provided about these critical times and people. I especially appreciate the presentation of George Washington as a living man.

This book is destined to become a classic

I recently visited Valley Forge for the first time in about 15-years and decided that it was finally time for me read up on the story behind the story. As we learned as schoolkids, Valley Forge was the place where the Continental Army recovered after a series of defeats and where Washington and some prominent foreign advisers transformed the rebel force into a modern army of the era.

This book elegantly and eloquently explained that so much more was going on. It's a story about Washington's struggle against internal rivals and an unresponsive political leadership, his clever argumentation to jar legislators into action, his skillful handling of micro-managers, the brilliant cadre of deputies and aides who enhanced their commander-in-chief and faithfully ensured the execution of his will. The book artfully tells a story with a central theme; George Washington's determination to prevail. You will learn exactly why Washington and so many members of his inner circle were extraordinary.

The Continental Army and militias didn't sit at or drill in Valley Forge; the location was chosen because of its proximity to occupied Philadelphia and the book describes raids into what are now Bucks, Montgomery, Delaware, and Chester counties, as well as New Jersey as part of an effort to deny essential supplies to the British Army. Even in winter and poorly supplied, Washington proved to be an audacious commander. Although the defeat at Brandywine opened the door to the British army's occupation of the US capitol, Philadelphia, Washington refused to retire to the Pennsylvania or Delaware hinterlands.

Instead, he wanted to challenge the British occupation and the book describes other battles that followed, before and during the Valley Forge encampment; the Paoli massacre, the Battle of the Clouds; Germantown; Marston's Ford, Whitemarsh, the Darby Raid, Crooked Billet, and Barren Hill, Most Philadelphians are barely aware of what happened in and around their environs in 1777-1778. The book provides excellent insight into the civil war taking place one the outskirts of Philadelphia between loyalists and rebels.

In addition, the book puts into context how the French decision to enter the war after Saratoga dovetailed with the professionalization of the Continental Army.

We learn about the relationship between Washington and his lieutenants: Charles Lee, Henry Knox, Nathaniel Greene, Horatio Gates, Lord Sterling, Von Steuben, DeKalb, Lafayette, Hamilton, and Laurens. We also learn about the British high command: the Howe brothers, Cornwallis, Gray, Simcoe, and the challenges they faced presenting their challenges to leaders in London.

This is one of the best-presented and best-narrated stories of any audiobook I've enjoyed in a decade as an Audible member, It covers the political, diplomatic, intelligence, military and economic factors affecting the American Revolution during the Philadelphia Campaign and the Valley Forge encampment. The slender presentation and the narrator could be Ken Burns!

I'm truly sad that I've finished this book because Im highly skeptical that the next ones will rise to its standards.

A must read for Revolutionary War fans!

Even though I have read a lot about our country's founding and have learned to appreciate the real leader who Washington was, this book filled in many more details. I will listen again to this part of our history!

An amazing, well researched book that draws the reader(listener) into the sacrifice and determination of Washington, his officers, and the diligent militia and soldiers of the American Continental army. Hated that the book ended. Narration is superb.

I always like adding to my understanding of events in history, this book added to that base of knowledge.

Well done. I have a new appreciation for Washington and what he did. Love this book.