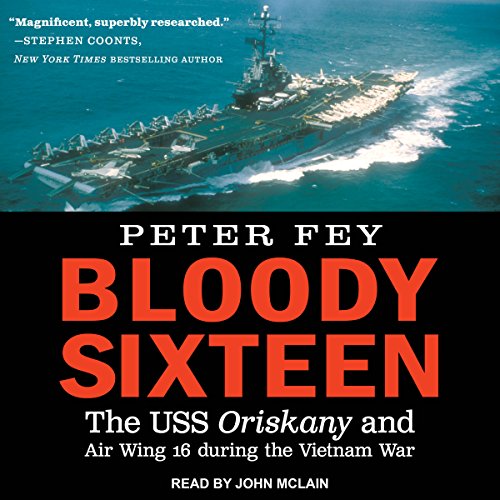 Strategy and reality collide in Peter Fey's gripping history of aircraft carrier USS Oriskany's three deployments to Vietnam with Carrier Air Wing 16 (CVW-16). Its tours coincided with the most dangerous phases of Operation Rolling Thunder, the ill-fated bombing campaign against North Vietnam, and accounted for a quarter of all the naval aircraft lost during Rolling Thunder - the highest loss rate of any carrier air wing during Vietnam.

The Johnson administration's policy of gradually applied force meant that Oriskany arrived on station just as previous restrictions were lifted and bombing raids increased. As a result, CVW-16 pilots paid a heavy price as they ventured into areas previously designated "off limits" by Washington, DC.

Named after one of the bloodiest battles of the Revolutionary War, the Oriskany lived up to its name. After two years of suffering heavy losses, the ship caught fire - a devastating blow given the limited number of carriers deployed. With only three months allotted for repairs, Oriskany deployed a third and final time and ultimately lost more than half of its aircraft and more than a third of its pilots. The valor and battle accomplishments displayed by Oriskany's aviators are legendary, but the story of their service has been lost in the disastrous fray of the war itself.

What listeners say about Bloody Sixteen

I really enjoyed this book, The naval contribution to the war in Vietnam is something that I think is sometimes overlooked.
The research is deep, and you get to feel how life was out at sea, and in the air.

Rolling Thunder on the Oriskany

This book was pretty clearly based on reviews of official squadron histories and after action reports, supported by accounts by participants when available. Okay, but could be a bit dry. The narrator was clearly not familiar with Navy/military lingo: kept spelling out CAG and Mk, and thought 1MC was IMC.

The book ends with a two-hour plus reading of several appendices. They would have been awesome as a .pdf for historians, but not something most will want to listen to.

Well researched but hard to listen through

The most distracting part for me was John’s narration: mainly that he spelled out the acronyms rather than say them like words as we’ve become accustomed to in naval aviation. IE “CAG” becomes “the see aye gee” throughout the book. His voice inflection and tone just wasn’t a good fit for the content in my opinion. But good content and coverage of the campaign from one air wing’s perspective and written with the typical slant/support bias typically found in coverage of Vietnam by pro military sources. IE: the administration hamstrung the strike groups without any good reasons for it- this is stated as fact, if only due to consensus among the operators themselves. The same current runs through all the Navy SEAL books I’ve encountered for this period- though often with less supporting evidence and more self-righteous bravado.