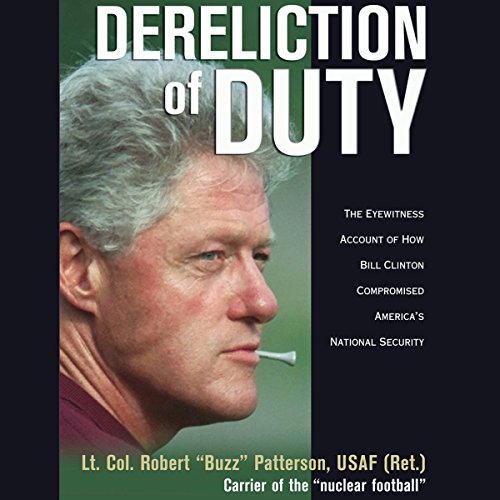 Here is the ultimate insider's account from the highest and most sensitive levels of the Clinton administration, revealing how the irresponsible use of power can lead to a terrible price paid by all Americans.

Air Force Lieutenant Colonel Robert "Buzz" Patterson was one of the military aides to commander-in-chief William Jefferson Clinton. What Patterson saw shocked him - and finally led him to write this stunning book. It is a warning of just what harm an irresponsible president can do to our national security - harm that, Patterson shows, made the terrorist attacks of September 11th, 2001, almost inevitable.

What listeners say about Dereliction of Duty

While I'm not the biggest Bill Clinton fan, it's pretty obvious that author, Robert Patterson bares all in this book about his disdain (and not just about the presidency) for former Pres. Bill Clinton and his administration.

Patterson makes it clear that he stayed on board to do the best that he could do to help lead our country in a way that he thought was the best direction for it to go (militarily wise), but that he was under the direction and guidance of a new presidential administration with Bill Clinton.

This book is much more than just another “Monday Morning Quarterbacking” or an “I told you so” type of recollections, because the author, Robert Patterson, being of the military personnel, was up close and personal to the ongoing and growing terrorist threats that were coming our way most likely beginning during Clinton’s administration. Clinton, to his credit was more focused on growing the economy and spreading democratic diplomacy throughout the world.

It's a pretty good "insiders book" at a look at a lot of the dysfunction and craziness that was going on during Bill Clinton's administration. Of course, "Hawks and Doves" rarely see eye to eye, and this relationship was no exception. That, added along with a lot of the "distractions" of the Clinton administration and it's a wonder that Patterson hung in there as long as he did in the first place.

No matter, which side of the aisle you're on, this is a book that will keep your interest throughout... even though you probably know the ending pretty well by now.

Dereliction of Duty the whole story

This book delves into all the corruption disrespect this president had for the American people and our military.
It gives a true insight to who the Clintons really are and how they have hurt American interests here and abroad.

A MUST READ FOR EVERY AMERICAN

It is a troubling story about a self-centered presidency and position Clinton placed the Country in...We can thank our lucky stars that Hillary
Clinton is not our president as she, too, has no respect for the military..
Her unbridled tongue spews language toward those who served and protected her is shameful...

Not another Clinton- we will have no military left

Would you consider the audio edition of Dereliction of Duty to be better than the print version?

Not necessarily a better version, I have read both, but certainly an entertaining one.

What other book might you compare Dereliction of Duty to and why?

A book unlike any other. A must read before you vote again.

What about J. C. Hayes’s performance did you like?

If you could give Dereliction of Duty a new subtitle, what would it be?

A must before you vote! .

People were wrapped up in the Lewinsky affair but there was so much more to the appalling attitudes and policies of the Clinton era. The lack of respect for the military, for the office of the President, for people of all races, and the taxpayer in general. According to this Hillary would be even worse

Thanks! A story that needs to be told!!
Will highly recommend! Very nicely done. Can’t wait for more!

way to shed light on what real self-serving, trashy-elite buffoons the criminal clinton's are. LOCK HER UP!!!!

I believe the author did a good job of presenting the facts and information in an objective fashion. I never got the impression he was a partisan.