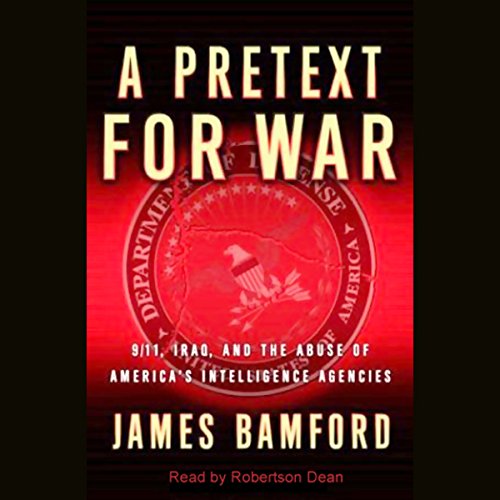 A Pretext for War

A Pretext for War

This book says outright what many have merely hinted at: that President George W. Bush knowingly misused the findings of the erroneous and incompetent U.S. intelligence community to provide a pretext for war with Iraq. The author hones in on the systematic weaknesses of the intelligence agencies that caused them to ignore the crucial signs leading up to the attacks of 9/11. Incompetence, deception, and misinformation from these agencies simply left the door open for President Bush and his cronies, who were less interested in the capture of Osama bin Laden and the destruction of his terror network than in following a dubious agenda in Iraq. The missing "weapons of mass destruction" are merely the latest by-product of Bush's co-optation of intelligence for political ends.
Want to learn more about the author and A Pretext for War? Listen to James Bramford on the June 8, 2004, edition of Fresh Air.
©2004 James Bamford (P)2004 Books on Tape

"Much of the information and many of the theories in Mr. Bamford's book will be familiar to readers from earlier magazine and newspaper articles, and other books....But Mr. Bamford unearths new details about everything from the identity of one of the disclosed locations used by Vice President Dick Cheney after 9/11...to the failures of a special CIA unit charged with tracking Osama bin Laden, and he connects the many dots, both old and new, to create a vivid, unsettling narrative." ( The New York Times)

What listeners say about A Pretext for War

An important contribution to the history of 9/11

This is an excellent telling of the lead-up to the Iraq war - it shows how far apart lie the fiction and the reality surrounding America's intelligence services. It also tells the truth about the real duplicity of the US President and his allies (especially UK Prime Minister) in their push for regime change. One thing about the reader, who is generally very good and deals well with many difficult names - I did laugh out loud when he talked about the infamous 'doggy dossier' (it should be prodnounced 'dodgy' - dɒdʒi/ or 'dod-gi').

brilliant from start to finish.

Worth listening to if you want the truth behind the secret state.

The bookshelves are now groaning under the weight of books detailing what went wrong in Iraq.

Whatever the outcome in Iraq, there has been a continual shift in providing a rationale for the war. This book takes you back to the original justification for the attack.

My dots are connected

James Bramford is well known for his other books on security and NSA (e.g. Puzzle Palace). He is recognized for his careful research and attention to detail. In 1983 he introduced us in the "Puzzle Palace" to the inner workings of NSA before anyone knew it even existed. That book has withstood the test of time and is now a classic - in fact I am told it is required reading by all new NSA employees.

Again in this book Bamford seems to have the facts at his fingertips - many many dots floating in outer political space for me since 9/11 and the war that just never made any sense are now connected by this book. No emotion no agenda no deck of cards - just lots of interesting facts that are easy to check. This is not a political book in fact it is equally critical of both sides. In the end the facts are both interesting and explain how we got ourselves into 9/11 and the war - it makes it understandable. The Dots are connected.

He does ramble a bit from topic to topic, but so do the dots - just fascinated by backup details on history of people and why it all came together the way it did. In the end no answers but important to understand whats happend to start.

I have never written a review and listen to and read hundreds of books feel compelled to say this book is a must listen.

Like many Americans, I have always had my suspicions about the war in Iraq. This book attmpts to shed some light on the matter. It is a great listen. I couldn't put my iPod down once I started listening. At the same time, it made me feel cheated and less trusting of our leaders in the highest offices of government. However, I feel that you should give it a try and decide, for yourself, what is truth and what is fiction.

Am writing this book review right after the 7/7/05 attacks in London. The Downing Street Memos have surfaced, we know from them that the intelligence to go to war was fixed in order to sell the invasion to the American people.

This book tells all about how this happened. It tells precisely and dispassionately about the lies and where they came from and who cooked them up. The author tells ahead of time, what the memos now corroborate. Details about what brought Colin Powell to the table at the UN, how he fought it and what happened and why. It tells why after fighting and killing and being killed in the name of waging war on terror nobody is safer or better off.

I knew a lot before I read it. Now I know how it all hangs together, and I am terribly saddened at our massive losses as a country because of a corrupt, dishonest and self serving set of leaders.
I read it twice, back to back. I highly recommend the education it affords.

Firstly, if you haven't heard Robertson Dean narrate a book, do yourself a favour - he makes this book! (also narrated I am Legend)
A Pretext for War was a captivating and often chilling presentation of the facts surrounding the events leading up to and of the September 11 attacks and the Iraq War. At times throughout the middle and late stages of the book you can become lost in the details. There are so many dates, names, departments and acronyms that you can get quite lost in the maze. In saying that though, if you're into the nitty-gritty facts surrounding this topic you'll love this book. It makes the book readable (listenable) over and over.

A must read before you vote

If you think we have fallen into a trap in Iraq because of misinformation, you might come away with the notion that the White House knew there was not meat on the bone in the first place. If you think we are doing the tough job in Iraq, and that we made our country more secure by our actions, then you might want to rethink your position after listening to this book.

Listen to ?Sleeping with the Devil? too. This is not Fox News!

Confused or Sell Out

What a sell out. He is obviously confused or a sell out. But don't be misled. If there is any amount of telling secrets of national security, this book would not been printed at least not for years to come.

The most informative aspect is in "reading between the lines." James Bamford tells about the many years of threats planned on the US prior to President Bush's presidency but puts blame on President Bush. A book that uses facts to legitimize fiction or at the very least a bruised ego. He exposes his own failings to practically understand limitations of individuals and governmental agencies - of course; he could have done it better.

Let?s get intelligent and use more critical practical thinking and realize humans are limited and flawed in their abilities. As such, I recognize the author's work and take his criticism with a grain of salt. I was left asking the question: What wasn't in the book? How about Sadam?s breaking of a cease fire and treaty, the attacks on American military, Iraq's breaking of international laws, Iraqi support of terrorism, the French, German and Russian roles in breaking the "oil for medical and food" agreement to supplement their economies, the philosophical, religious, etc. reasons nations went and go to war.

Summery: Grossly lacking, emotionally fueled, and self serving to the author. A book that is difficult to put down if you paid for it either for its story (the emotional impact of the events) or for its inadequacies.

A pretext for war

This book is in two parts, you keep reading this book in the belief that it will get more interesting but it never does, it could have been delivered in half the time, the way the book is delivered is fatally flawed give this one a big miss there must be better books out there on this subject that keep you entertained as well as giving you the facts.