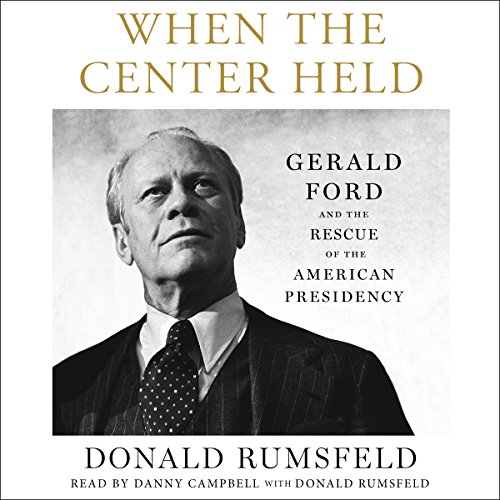 When the Center Held

A revealing political memoir of the presidency of Gerald Ford as seen through the eyes of Donald Rumsfeld - the New York Times best-selling author, and Ford’s former Secretary of Defense and Chief of Staff, and longtime personal confidant.

In the wake of Watergate, it seemed the United States was coming apart. America had experienced a decade of horrifying assassinations; the unprecedented resignation of first a vice president and then a president of the United States; intense cultural and social change; and a new mood of cynicism sweeping the country - a mood that, in some ways, lingers today.

Into that divided atmosphere stepped an unexpected, unelected, and largely unknown American - Gerald R. Ford. In contrast to every other individual who had ever occupied the Oval Office, he had never appeared on any ballot either for the presidency or the vice presidency; he had issued no policy statements nor had he ever run for national office. Now, he was being thrust into a chaotic environment in which our very future as a functioning democracy was being seriously questioned.

Gerald Ford simply and humbly performed his duty to the best of his considerable ability. By the end of his 895 days as president, he would in fact have restored balance to our country, steadied the ship of state, and led his fellow Americans out of the national trauma of Watergate. And yet, Gerald Ford remains one of the least studied and least understood individuals to have held the office of the President of the United States. In turn, his legacy also remains severely underappreciated.

In When the Center Held, Ford’s Secretary of Defense Donald Rumsfeld candidly shares his personal observations of the man himself, and provides a sweeping examination of his crucial years in office. It is a rare and fascinating look behind the closed doors of the Oval Office, including never-before-heard memos and anecdotes, from a unique insider’s perspective - essential listening for any fan of presidential history.

What listeners say about When the Center Held

I am not sure how to classify this book. Is it a biography of Gerald Ford or a memoir of Donald Rumsfeld’s time as Ford’s Chief of Staff? I think it is more of a memoir of Rumsfeld. The book is definitely biased as Rumsfeld’s admiration of Ford come through loud and clear. Ford came to the presidency when the country was in crisis and chaos after the resignation of Richard Nixon. The economy was in trouble as inflation was at a fifty-year high. Ford’s strong response to the Khmer Rouge’s seizure of the merchant ship U.S. Mayaguez in international waters told the world that there was a president in control of the country. Ford signed the Helsinki Accords on Human Rights. Ford brought stability back to the country.

The book is well written and documented. Rumsfeld provided an insider view of Ford’s presidency. Rumsfeld kept a daily diary which he used in writing the book. Rumsfeld reveals the chaos in the country and how with a steady hand Ford brought the country back to normalcy. Even though I lived through this period, the book was a great reminder of the times and provided insider information. I highly recommend this book.

The book is just over ten hours. Danny Campbell does a great job narrating the book. Campbell is an actor and award-winning audiobook narrator. Campbell has won multiple Earphone Awards. I have enjoyed listening to Campbell many times over the years reading a variety of different audiobooks.

I enjoyed hearing more about Pres. Ford's time in office but I believe the author inserted himself a tad too often. Seemingly always having the right word, thought or deed to aid the President.