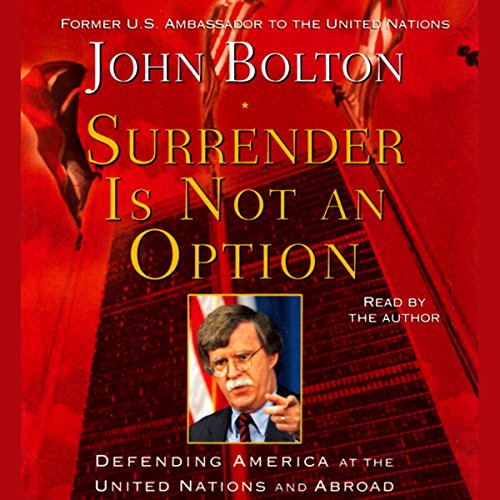 Surrender Is Not an Option

A veteran of three Republican administrations and a nominee for the 2006 Nobel Peace Prize, John Bolton reveals how the U.S. can lead the way to a more realistic global security arrangement for the 21st century and identifies the next generation of threats to America.

With no-holds-barred candor, he recounts his appointment in 2005 as ambassador to the United Nations, his headline-making Senate confirmation battle, and his 16-month tenure at the U.N. Bolton offers keen insight into such international crises as North Korea's nuclear test, Iran's pursuit of nuclear weapons, and much more. Recounting both his successes and frustrations, he also exposes the operational inadequacies that hinder the U.N.'s effectiveness in international diplomacy and its bias against Israel and the United States. At home, he criticizes the pernicious bureaucratic inertia in the U.S. State Department that can undermine presidential policy.

A fascinating chronicle of the career of a distinguished lawyer and diplomat, Surrender Is Not An Option is sure to become a staple for everyone interested in international affairs.

What listeners say about Surrender Is Not an Option

Here is a fact that will irritate some. John Bolton is the most refreshing voice in Washington. That's right. He is strong, principled, and sincere. He has the additional virtue of being right most of the time. I mourned the fact that he was pushed out of his job at the UN -- a place he was sorely needed. We all know who we have to thank for that.

This book is at least something of a comfort for those of us who want to hear unfiltered truth about our foreign policies. In this book you will learn how that the ABM Treaty was hopelessly antedated and a stumbling-block for dealing with unstable nations that have WMDs. You will cheer when North Korean ships are boarded and found to be carrying missle parts under loads of innocent cargo. You will learn of the duplicity of some of our so-called friends; their cynical use of international organizations for personal aggrandisement and big money deals. You will see the real twists and turns of a world gone mad in the face of diplomacy. But, even with this, John Bolton remains our stalwart defender of truth and morality. His plain and unornamented voice rings true in this audio recording. John deserves our respect and admiration. I only wish now that he would quit writing books and get back into government.

If you know anything about US foreign policy, skip

Mr. Bolton is a no-nonsense problem solver. The UN is a bureaucratic hell hole.

Then the book ends.

If you've followed the first thing about these two problem nations and US foreign policy over the last decade then you could probably write this book yourself without even performing any research beyond dates.

I had hopes, and it started out well, then bureaucratic stories take over, then wait what? It's over?

I was pleasanlty surprised by some of the insights highlighted by Mr. Bolton. It still makes me wonder why we are part of the UN as it seems useless and the people running it are spineless. We need more people in the world like Mr. Bolton who are willing to hold themselves and others accountable.

John Bolton is a Great Statesman and I loved bookG

If you could sum up Surrender Is Not an Option in three words, what would they be?

He is so sincere with integrity. We need more honest people and not self serving in government !!

Which character – as performed by John Bolton – was your favorite?

He Himself was Great !!

I have listen to it multiple times since my purchase !!

He like Douglas MacArthur predicted the future, should we not heed the warnings !!!