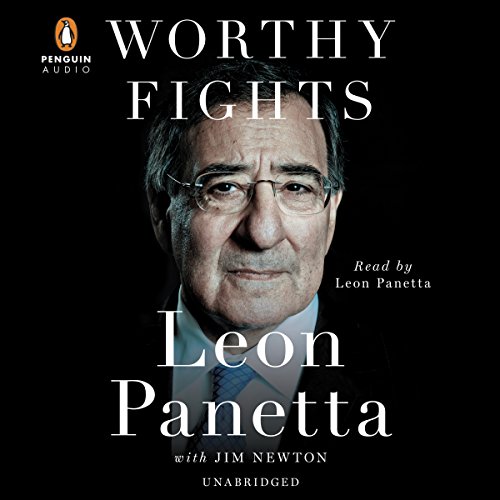 A Memoir of Leadership in War and Peace
By: Leon Panetta, Jim Newton
Narrated by: Leon Panetta
Length: 19 hrs and 28 mins
Categories: Biographies & Memoirs, Political Figures
4 out of 5 stars 4.0 (1 rating)

It could be said that Leon Panetta has had two of the most consequential careers of any American public servant in the past 50 years. His first career, beginning as an army intelligence officer and including a distinguished run as one of Congress' most powerful and respected members, lasted 35 years and culminated in his transformational role as Clinton's budget czar and White House chief of staff. He then "retired" to establish the Panetta Institute with his wife of 50 years, Sylvia; to serve on the Iraq Study Group; and to protect his beloved California coastline. But in 2009, he accepted what many said was a thankless task: returning to public office as the director of the CIA, taking it from a state of turmoil after the Bush-era torture debates and moving it back to the vital center of America's war against Al Qaeda, including the campaign that led to the killing of Osama bin Laden. And then, in the wake of bin Laden's death, Panetta became the U.S. secretary of defense, inheriting two troubled wars in a time of austerity and painful choices.

Like his career, Worthy Fights is a reflection of Panetta's values. It is imbued with the frank, grounded, and often quite funny spirit of a man who never lost touch with where he came from: his family's walnut farm in beautiful Carmel Valley, California. It is also a testament to a lost kind of political leadership, which favors progress and duty to country over partisanship. Panetta is a Democrat who pushed for balanced budgets while also expanding care for the elderly and sick; a devout Catholic who opposes the death penalty but had to weigh every drone strike from 2009 through 2011. Throughout his career, Panetta's polestar has been his belief that a public servant's real choice is between leadership or crisis. Troubles always come about through no fault of one's own, but most can be prevented with courage and foresight.

Panetta memoir is the third cabinet member’s memoir and Obama is still in office. The memoir is a sub category of the autobiography. When I read a memoir I expect a narrow focus and want to feel I am looking at the situations as if I was that person. I am reading to get a better understanding of the events for a historical perspective. Panetta’s book gives a brief review of his earlier life so we can understand how he got to the point in the book that he is focusing on. He successfully puts me into the life of the director of CIA and Secretary of Defense. I felt as if I was in the meetings with him, understanding what he knew and thought and reactions to people and events as he covers his time as director of the CIA and Secretary of Defense. More than half of the book covers Panetta’s time as director of the CIA and his time as Secretary of Defense.

Panetta’s book is well-written with frank descriptions of personalities and events. Panetta had been in government service for a long time and was the Congressman for the Monterey Bay area for many years. I enjoyed the story of his parents and grandparents immigration from Italy to the Monterey Bay area and Leon’s stories of childhood in Monterey. Panetta’s personality and his honesty came through in the book. The author covers in-depth the jobs he had in government including his being fired by Nixon when Panetta worked at Dept. of HEW enforcing the new laws about school segregation. I remember when the law was passed to create the Monterey Bay Marine Sanctuary to protect our beautiful coast (I live here). Therefore I found Panetta’s discussion about how he went about trying to protect the coast from off shore drilling and all the methods he tried and failed at until coming up on the creation of a marine sanctuary very interesting. Panetta tells of his time in the Clinton White House as first budget director and later chief of staff. He is frank about the problems he had trying to bring order and discipline to the White House when Clinton had no self discipline. He describes Clinton as brilliant but disorganized. He resigned in 1997 and thought his career was over.

Panetta created the Panetta Institute that is on the campus of the Monterey Bay State University. He was running this until 2009 when Obama asked him to be director of the CIA. Panetta is a master of the budget and the CIA was in dire need of his services and organization skills. Panetta discusses his problems with Speaker of the House Nancy Pelosi and retired Admiral Dennis Blair who was Director of National Intelligence. He also tells the fascinating story of finding Osama bin Laden and sending in the seal team.

Panetta’s disagreements with the Obama White House when he was director of CIA and Secretary of Defense is well documented in his testimony before Congress therefore his frank to almost blistering comments in this book should not be surprising. Panetta opposed the prisoner exchange for Bowe Bergdahl. He disagreed with the removal of all troops from Iraq. He agreed with Hillary Clinton and David Petreius about intervening in Syria. Most of all he said Obama’s failure to act when Syria crossed the red line Obama laid down about the use of chemical weapons on the Syrian people destroyed American credibility. The author provides us with his opinion about Obama’s ability as a president and he is careful to provide both positive and negative points of his abilities. Most of all Panetta minced no words about the dysfunction of Congress. He says there will be lots of problems coming up to blame on Congress because of their failure to agree on a budget and forcing the 10% across the board cuts that is going to destroy the ability of the military to do their job. Panetta had no good words for our dysfunctional Congress. I feel this memoir has provided an inside look into the workings of the CIA, department of defense and the white house.

Panetta is plain spoken and impassioned in the book. I found it to be most informative and easy to read. Leon Panetta narrated his own book.

Would you listen to Worthy Fights again? Why?

Goes well beyond the narrowly focused media coverage and provides a look at the kind of thoughtful, centered person one hopes to find in public service, as well as a sense of the context behind the actions in several Administrations.

I should have read the reviews more carefuly

Mr. Panetta is a great American whose contributions in Congress and the executive branch were profound. Mr. Panetta is NOT, however, a great narrator, and this contribution to this book was to drag it down into sheer boredom. This is not an action story to begin with so a little drama in the performance might have held my interest. It was as if Mr. Panetta was testifying before Congress rather than trying to entertain and inform his readers.

This book, read by Secretary Leon Paneta addresses the major issues of the Clinton and Obama administrations as well as his experiences as a Congressman. I really enjoyed this book which was doubly interesting being read by the author.
His expressiveness and tension served as clues to identify those issues that he felt strongly about.

Time well spent? Not so much. I expected a lot from Leon Panetta but what I got was a boring recitation of facts in a slow monotonous voice. Perhaps if I had read the book instead of listening to it, I might have given it a higher rating. Couldn't take his voice any longer halfway through the book.

I remember seeing Leon Panetta on TV, CSpan, and trusting the man. I watched as he rose in the ranks and fought some of the fights he waged. I liked the man. He wasn't from Texas, where I live, but I would have voted for him had he been on a national ticket. And...then I heard His memories of CIA, it confirmed much of my impressions from afar about the times, the front-seat view and backstage entre provided and ... my Final Decision IS ... Again ... I Trust Him. I Am Grateful HE Choose Public Service and I will See-To-IT ~ His work is passed On to the Future Generations of My Family with copies of this Audio Book! They Need to Know This Stuff. And, Leon Panetta, is a Role Model. Thank You, Sir, for Everything and this Christmas Gift, too!

I Hope his optimism in democracy is justified.

leon's book gives an insider's view to the two party system we govern under and the growing problems of polarization at the expense of good government
I highly recommend this book to all regardless of which side of the divide you are on . we must all consider how to return to good goverment!

Informative to see Panettas perspective on so many areas especially CIA and DOD ... but VERY VERY politically slanted. I appreciate his service and his role as DCIA and SECDEF but in this memoir he is extremely partisan and that was disappointing. He never gives his opponents credit unless they caved on their own principles and agreed with him. It's long very long but intriguing if you can get past the partisanship.

This bok is an important read for anyone who wants to understand the political history in Amyerica for the last 50 years. OTTOMO LAVORO!!