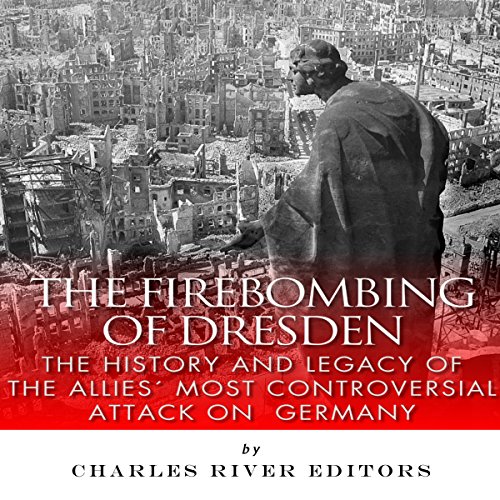 The Firebombing of Dresden

By: Charles River Editors
Narrated by: Bob Neufeld
Try for £0.00

"We saw terrible things: cremated adults shrunk to the size of small children, pieces of arms and legs, dead people, whole families burnt to death, burning people ran to and fro, burnt coaches filled with civilian refugees, dead rescuers and soldiers, many were calling and looking for their children and families, and fire everywhere, everywhere fire, and all the time the hot wind of the firestorm threw people back into the burning houses they were trying to escape from. I cannot forget these terrible details. I can never forget them." (Lothar Metzger, survivor)

In the middle of February 1945, the Allies were steadily advancing against the Germans from both east and west, with British and American forces having repulsed the German offensive during the Battle of the Bulge and the Soviet Union's Red Army pushing from the east. Indeed, the war would be over in just a little more than two months. Nonetheless, it was during this timeframe that the Allies conducted one of the most notorious attacks of the war: the targeting of Dresden.

As a Royal Air Force memo put it before the attack, "Dresden, the seventh largest city in Germany and not much smaller than Manchester, is also the largest unbombed built up area the enemy has got. In the midst of winter, with refugees pouring westward and troops to be rested, roofs are at a premium, not only to give shelter to workers, refugees, and troops alike but to house the administrative services displaced from other areas. At one time well known for its china, Dresden has developed into an industrial city of first-class importance"....

What listeners say about The Firebombing of Dresden

Interesting take on the horror.

If you could sum up The Firebombing of Dresden in three words, what would they be?

I quite liked the first half of this book; my interest tailed off a bit towards the end though. The narration was good and the subject matter kept my interest. I would definitely recommend this book. There was nothing which I disliked, so all in all a thumbs up.

What other book might you compare The Firebombing of Dresden to, and why?

I can't think of any books to which I might compare this one to; it's approach to the subject matter is fairly unique.

A dense of the indefensible. Author cobbled together a list of justifications for the killing of 25,000 people just two months before the end of the war. Dresden had no military importance and its population included many people who had fled the Nazis. The author lays the blame Hitler. Certainly the Allies share significantly in the blame. The destruction of Dresden was vindictive punishment by the Allies for a war they had already won. An unnecessary violence adding to the violence Hitler had already perpetrated.