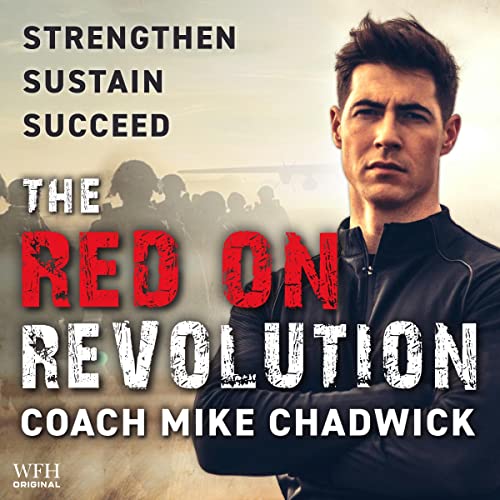 The Red on Revolution

An Original Audiobook Production by W F Howes, written and presented by Mike Chadwick with guests including Ant Middleton, The Stoltman Brothers and Anthony ‘Staz’ Stazicker.

From the coach behind the military and sporting elite comes a revolutionary approach to success. Mike Chadwick is a trainer of champions, a leader of leaders; the coach with the ear of the elite. To date, much of his work has been from the shadows: in essence, as the Secret Coach. Until now.

Do you have a challenge ahead that requires physical or mental strength?

Are you working towards a goal but struggling to sustain the level of commitment required?

Do you know what it takes for you, personally, to succeed at the highest levels?

Coach Mike Chadwick is ready to help. This former Paratrooper tore up the British Army’s century-old approach to physical development and sent success rates soaring, before becoming one of the foremost coaches to the elite.

In The Red on Revolution Coach Mike exposes countless fitness-industry myths and coaches you, personally, to succeed. Coach Mike doesn’t care about your past achievements, but he cares greatly about where you are now and your pathway to success. You will learn about the physical, psychosocial and psychological principles of progress and recalibrate your attitude towards fitness, physical readiness and the role of mental strength.

Progress and success looks different on every single person. By revealing the secrets of the strongest, Coach Mike will show you how you can reach your fitness goal and be ready for anything.

Only one question remains: are you in?

Red on Revolution is his first book, sharing his principles for physical growth and announcing him as a figure at the forefront of the UK fitness and military market.

If you have a medical condition, illness, a history of injuries or are pregnant, you should always consult a medical professional before embarking on any new fitness plan.

What listeners say about The Red on Revolution