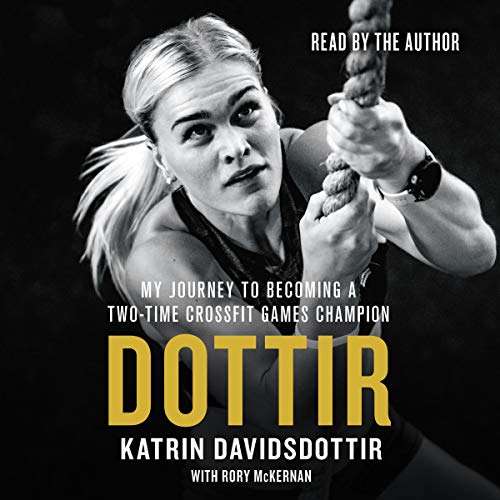 This is a memoir written and read by two-time CrossFit Games champion, Katrin Davidsdottir.

Dottir is two-time consecutive CrossFit Games Champion Katrin Davidsdottir's inspiring and poignant memoir. As one of only two women in history to have won the title of “Fittest Woman on Earth” twice, Davidsdottir knows all about the importance of mental and physical strength. She won the title in 2015, backing it up with a second win in 2016, after starting CrossFit in just 2011.

A gymnast as a youth, Davidsdottir wanted to try new challenges and found a love of CrossFit. But it hasn't been a smooth rise to the top. In 2014, just one year before taking home the gold, she didn't qualify for the Games. She used that loss as motivation and fuel for training harder and smarter for the 2015 Games. She pushed herself and refocused her mental game. Her hard work and perseverance paid off with her return to the Games and subsequent victories in 2015 and 2016.

In Dottir, Davidsdottir shares her journey with listeners. She details her focus on training, goal setting, nutrition, and mental toughness.

I'm not normally one for biographies but this open and honest review of Katrins performances is hands down one of best books I've come across. Having Katrin read it herself makes it feel even more intimate. The frank way she discusses not only the highs but also the lows and less well known parts of her life sets this apart.
Loved it - now I'm off to the box

Amazing book - really inspirational to hear Katrins Story. True Sled-Dog! literally was glued to listening to her. I got through it in one weekend. Exactly what everyone needs to hear!

What an amazing journey this young woman has been on. It’s very inspiring to know the work and dedication that has been put into becoming such a great athlete. Thank-you for your words and inspiration I will carry it forward and use it to keep push to be a better person myself.

A glimpse into the life of a legend in the fabulous sport of Crossfit would be a win, this beautiful book is so much more. Katrin takes us on a rollercoaster ride, she shares her emotional & physical half decade test in her professional & personal life. I personally came away with this; ‘A journey has many turns but if when one reflects in the moment, one will be forever evolving’. I love this book & Katrin is truly a champion for all.

I do love fitness and crossfit but this audio book was super booring and big struggle. Sorry but not worth time

I started circuit training and felt like listening to a physically motivating book.
I picked the right book my muscle daren't complain! What blew me away was a young ladies understanding of herself. Admire the strengthen bit seriously admire the discipline. Thanks for getting me through 4 weeks of circuit training of which I will continue.

One of the BEST athletes!

Such a great story, and great to hear behind the scenes of what I remember watching and supporting.

I give Katrin a lot of credit for opening up about herself. Her story inspiring and uplifting. The story of her grandmother really resonated with me since I lost mine around the same time. I would recommend the book to people who are not into CrossFit since a lot of her story is about overcoming adversity. Knowing Crossfit and The Games just gives you some context. Another book I would listen to multiple times. Thank you for sharing your story.

I’m a long time fan of Katrin Davidsdottir and when I heard she was coming out with a book I was so excited!
I’m still glad I was able to listen to her story but in parts it was not much to listen to.

Loved the book narrator was great very clear voice my favorite part was her holding onto the chain her now deceased Grandmother also has.

Nice and touching story from a true champion. The narration is really sincere and humain. Very inspirational!

Great story. Inspiring for anyone into physical fitness. Katrin did an exceptional job on the narration.

This book is a very easy listen, story line easy to follow. I was so glad to hear Katrin reading her own story made the book a lot more personal. Amazing she was so by vulnerable in her book reminding all athletes we all can and will hit a low it’s what you do after. As a person who suffers from a lot of anxiety and depression it’s great to hear stories of amazing people you can relate to. Great job Katrin ! My 12 year old boys also love the book they are wrestlers.

I always love when the authors read their story. What a great athlete and inspiration. This book is very motivating!

Loved it! So inspiering and sincere. You could see in you mind what Katrin was decribing.

I haven't read or listened to a book in over 10 years. 2 years ago, I made a lifestyle change that included losing 90lbs. A year ago, I started crossfit to become stronger and help me overcome an injury from a motorcycle accident where I almost lost my leg.

With starting crossfit you learn about the games. I didn't know why Dottir was in so many of the womans names that I had to do some research. I became intrigued and wanted to know more about the Iceland women. I read somewhere that Katrin didn't qualify for the games and then came back 2 years in a row to become the fittest on earth. I wanted to know how she did it.

I've been wanting to pick up a healthy habit like reading. This weekend I had 12 hours in a car and I knew that I wanted to listen to a book. I finished this book in two days! It's amazing to listen to Katrin and hear her struggles and be able to relate so much. It was an eye opener that everyone has the same fights inside their heads. Sometimes I guess I think that being on that level is all rainbows but it's not. I'm so glad that she narrated the story because it really helped me connect with her.

My favorite part has to be where I listened to how she played out things in her head to become the athlete that saw postivie within adversity. To listen to the mindset that I will one day have. and to know that there will be hard times where I'm lost, and be able to rebound. I also teared up in the epilogue because I want nothing but fo become a better me everyday. Thank you Katrin!

I have been following Katrin's success for years and always thought of her as super human and near impossible for a "normal" individual to come even remotely close to achieving in terms of her mindset and talent. Her story knocks that barrier down for anyone who thinks they could never conquer their long term goals or re-shape their lifestyle to achieve their dreams. Katrin's story changed my outlook on my mind set, my goals, and my dreams that I thought were impossible for someone like me to achieve. Thank you Katrin for sharing your incredible journey and giving me a glimpse into the mind of a champion who encounters the same everyday struggles and self-doubt everyone else has and how you work relentlessly to overcome them.