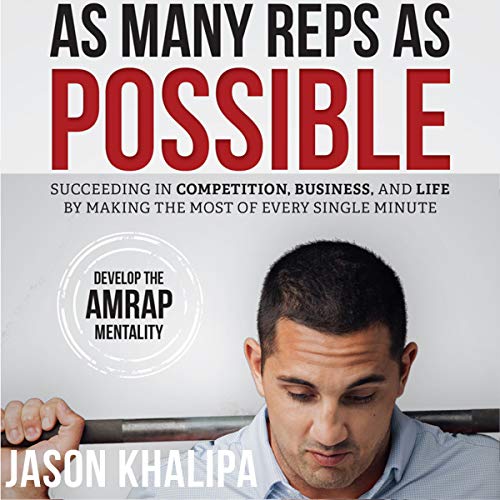 As Many Reps as Possible

Jason Khalipa's actions and accomplishments speak for themselves: devoted father, world champion, global businessman. After years of rigorous training, Jason earned the title of fittest man on earth and finished first in the 2008 CrossFit Games. Hard work and insatiable drive paid off, and his company, NCFIT, grew to success. Jason thought he had overcome insurmountable obstacles throughout his career, but nothing prepared him for the moment when his daughter, Ava, was diagnosed with leukemia. Tasked with facing what no parent should have to confront, he had two choices: succumb to overwhelming anger or jump headfirst into the fight. He chose the latter.

In his first audiobook, As Many Reps as Possible (AMRAP), Jason reveals the invaluable principles that helped him and his wife dedicate every minute of their lives to Ava's battle. The backbone of Jason's success is a simple and accessible process that, with dedication, will help you take control of life, harness your true potential, and triumph in every way. Borrowing from the fitness idea of completing as many reps as possible of an exercise in a given time period, Jason developed the AMRAP mentality, a proven system that will help you discover your why, focus on what you can control, work hard, and ultimately blow past your goals.

With clear insight, personal anecdotes, and directed listener exercises, this audiobook will help you get where you're going, wherever that may be. Be prepared to dream big, dig in your heels, roll up your sleeves, and get to work.

The AMRAP mentality is here. Life is waiting for you.

What listeners say about As Many Reps as Possible

Loved it, done and dusted within two days.
Found myseld implementing the AMRAP mentality throughout the book.
Great job.

Brilliant, just what I needed

This book is amazing! Super inspiring and a great insight into what it takes to be a top level crossfit athlete. Its applicable to so many things in life, relationships, business, working out, competing and so much more. I cannot recommend this book more.

Sincere, straight to the point , no messing , be your best self... loved it.

I’ve listened to a lot of motivational books, this one is one of the easiest to get straight away.

2 years crossfitting, a great reminder on the Why

I'm never a book worm so having this book as short, sweet, concise, straight to the point worked extremely well for me.

There are principles here that I am already doing with my life but there are so much more to learn and apply especially in the journey of finding the why.

I can't wait to do my next WOD now.

This book could not have presented itself to me at a more relevant time!!!
Thankyou ♥️

Having done many AMRAP workouts, I can fully get behind this mentality! Using the mindset that is required to complete an AMRAP in every part of your life just makes sense.

this book offer ed great tools for life and success not only in fitness but outside as well.

The book fires me up every time I read (listen) it. Being in the fitness industry, I’m inspired by his dedication and growth. I recommend it to anyone who needs kick in the butt to get your goals rolling!

Real talk about life and beyond CrossFit

I thought this book is another athlete empowerment book, but it went beyond that, learning life lessons, entrepreneurial qualities and about hard work.
Jason Khalipa thank you for this!

This book is straight to the point. I love it. We all need to focus better and to be more in the details of the projects or life tasks we take on. Jason actually explains HOW to do it and how it will benefit! Thank you for writing this book, it explains some pretty important everyday actions and how to shift your mind for the better. Strongly recommend this book if you’re looking to make some positive changes and habits in your daily life.

Jason did an amazing job creating and explaining the AMRAP mentality. you get a closer look into his struggles (and it is so heartfelt and genuine) and why and how he got to the success he's reached today. its a very easily understandable and relatable book (is not focused on fitness alone!). highly recommend for anyone looking to streamline their daily tasks and get ahead in life. thanks Jason for all you do and for just being an awesome human being!!

Jason does a great job narrating the book himself. Mad props for anyone who narrates their own work. Many great take aways from the AMRAP mentality!

This book was amazing!
Lots of insight into working towards multiple goals and splitting your focus!
Highly recommend to anyone wanting to get the most out of life