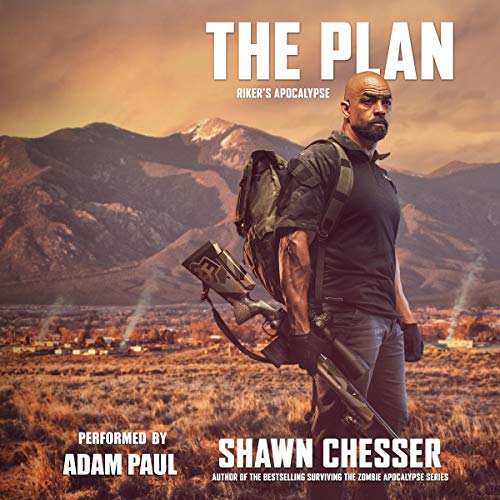 By: Shawn Chesser
Narrated by: Adam Paul
Try for £0.00

What would you do if you saw the zombie apocalypse coming and had time to prepare? Where would you go? Who would you take with you? Who could you trust?

Following their flight from zombie-infested New York and flush with cash from a recent inheritance, Army veteran Lee Riker and his sister Tara are holed up with their new friend Steve-O in a multi-million-dollar Miami Beach waterside mansion.

Hope for the best, plan for the worst.

Having witnessed firsthand the emergence of a virus that brings the newly dead back to life and hungry for human flesh, the trio are holding out hope the government will sterilize the flashpoints of infection, and eventually achieve full containment of what the Centers for Disease Control are reporting as the fastest spreading virus mankind has ever seen.

But hopes are quickly dashed and worst fears are realized when the aptly named Romero virus shows up on their doorstep, forcing them to flee the tropical paradise with little more than the clothes on their backs and a semblance of a plan.

A plan whose few firm details Tara is afraid to divulge lest doing so jinx it for them all.

A plan Riker knows from experience will likely not survive first contact with the enemy.

A plan that will require teamwork and a whole lot of luck if they are going to survive to see it through.

What listeners say about The Plan

This is yet another great book in the series! I need more.

This 2nd book in the series lived up to the 1st. I thoroughly enjoyed the interaction between the main characters, the humor and all the action of which there is plenty. Loved this book and I'm very much looking forward to the next in this series.

From the very start to the very end of an apocalyp

Love it. Well put together and shows us the entire journey of the apocalypse. From start to finnish.

Gives us the gory details without sounding like some splatterstory and goes into detail of how the society deteriorate as the virus spreads.

Not to mention the show of normalsiebias.
How hard it is for humans to wrap their head around a totally new reality.

Hope this will be a long running series!

I have always loved to hear in a zombie novel how everything started and how the downfall spreads, The Plan didn't disappoint! The characters are amazing and Adam Paul knocked it out of the park with his telling of the tale.

This is the second book in this series and I loved it! I have always been fascinated by the beginning of the Apocalypse and this was right up my alley!! Where would you go and what would you do?

well worth the credit - well written and a good listen.
I have listened to a lot of zompoc books, and this is at the top. never got boring and I never found myself "rolling my eyes" as I have with others in the genre.
I hope there will be more in the series!
Narrator did a great job with the characters voices.
wonderfully done

The only problem with mr Chesser,s new series is the time between books.
Riker,s Apocalypse books 1 and 2 had me carrying my iPad all thru the house and on errands. I just could not take a break from the story.
It’s typical Chesser . Great characters great story great narrator. Please
Tell me book 3 is on the way.

In this sequel to The Promise, Chesser continues to weave his story centering around a remarkable brother & sister along with their new found friend Steve O as they cope with a zombie outbreak along with a government coverup all while trying to honor their mother's last wishes. Having managed to do so, this book focuses on their trying to stay ahead of further breakouts as containment continues to fail. Starting out in Miami FL, the plan the siblings have in place means that they have to try to stay ahead long enough to reach their 'safe haven' recently purchased with the funds inherited from their mother's recent passing. With Steve O once again along for the ride, their trip is not an easy one. I truly hope that there will be another book to follow although the way it ended had lose ends tied up. Definitely recommend.
My only issue is with the narrator who again is constantly lowering & raising his voice. I wish they used the same guy who did his other series as he doesn't do that.

I just simply love the Ryker family, especially since no one is prepper ready. This book does hit on numerous levels of what the nations VET's go through on a daily basis. This was an awesome read, I'm impatiently waiting for book 3!!!!

As if written by talented 14-year-old. Narrator is Timothy olyphant/ Clint Eastwood hybrid. The dialogue between the characters too often does not match the situation they are in. and the character of tara, the sister, gets old very quickly.

Excellent second book in the series!

I really like the pacing in this book and the moments of levity. There are also some awesome popculture gems inside. What would you do if you just received your inheritance and the world is going to hell? If you enjoyed Promise you'll enjoy this one even more!

great series can't wait for the next book to come out. love how the story doesn't just jump into the after it shows what happens up to.