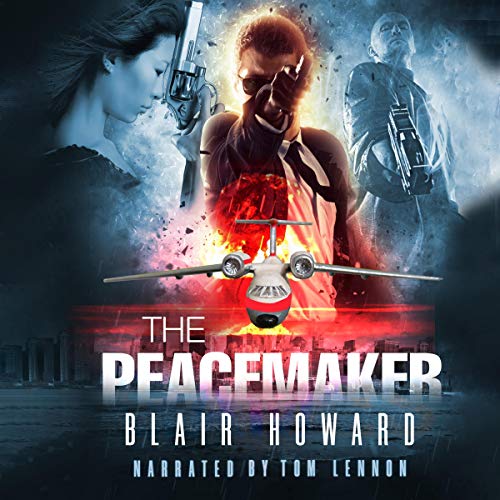 A secret plot to start a war. Two old enemies who must work together to foil it.

Under any other circumstances, hired assassin Cassandra Wu would be trying to kill her partner. But that’ll have to wait. Right now, they need to stop a war.

After escaping US custody in a deadly battle that leaves three FBI agents dead and another wounded, Wu is kidnapped by The Peacemakers, a Deep State organization dedicated to achieving peace on Earth. Unfortunately, to bring that about they must initiate WWIII and Wu must assassinate an impossible target: the Russian president.

Former British SAS sniper turned freelance assassin Nero is in hiding for crimes committed in the US when former lover and FBI operative Ellie Millard pays him a visit and blows his cover. She forces him to choose: work for us and stop Wu, or go to prison.

The last time Nero saw his arch enemy Wu, she almost succeeded in killing him. As Nero moves behind enemy lines in Siberia to track the elusive Wu, he uncovers a secret web of deep state operatives about to pull the strings on a deadly plot. To stop them, Nero realizes the only other person he can trust is the one he’s been sent to destroy: Cassandra Wu.

Will Nero and Wu be able to put aside their differences and combine forces to stop The Peacemakers? Or will the temptation to kill each other prove too great? If you like the thrills of Jack Reacher or the intense action of John Wick, then you’ll burn through The Peacemaker.

Buy The Peacemaker today and hang on. It’s a rough ride!

What listeners say about The Peacemaker

I've put this one in my read again list

A fairly easy read, good plot and plenty of action and intrigue.
A good entertaining book.
Narration by Tom Lennon is as always superb.
I received a free copy of this audio book at my own request and voluntarily left this honest review. .

A well-written story from a very good author

The Peacemaker, my twenty-fifth read from author Blair Howard. Well-written and enjoyable, edge of your seat fiction, the first in his new series. Narrator Tom Lennon's excellent narration, as always, adds to the enjoyment of the book. I look forward to his next book. (RIP Marley January 20, 2014 - July 24, 2018).

THE PEACEMAKER.......Blair Howard
A city that doesn’t sleeps, the fates of nations are decided, in the game of politics. A meeting stating his people are in place, a month from now, a goal has been achieved ‘ of peace on earth’.Breaking news Cassandra Wu been changed of murders In Tennessee. Through efforts of the local law enforcement and Detective Harry Starke
Transporting Wu back to London she escapes and now kidnapped by The Peacemakers. To bring peace to earth, first another war, another assassination must occur, and needing Wu. Nero has been in hiding for his
killings, they don’t give him any opinion. Can Wu wanting revenge and Nero work together to stop The Peacemakers
A new and different story line, which brings in the future and fast action adventure. Given ARC audio for my voluntary review and my honest opinion

Lots of Fun and Intrigue

This is an action-packed story from beginning to end with so many curve balls thrown at you, you're unsure who to trust or who to really root for or what conspiracy theory to believe. Lots of fun and intrigue.

The narrator, Tom Lennon, overall did a good job. His downfall is his attempt at accents. For example, I did not know, from his narration, that Nero, the MC, was British until it was revealed in the description late in the story.

"Locked, loaded and ready to fire."

The first in a new series by Author Blair Howard, the Peacemaker has the characteristic well rounded characters and fast, clearly choreographed action of the Harry Stark novels. When a former lover and colleague convicted of murder escapes from prison whilst en route to Britain and MI6, the man also known as Nero is recruited to find her and bring her down. An exciting read made all the more so by the fine performance of Tom Lennon who seems to perfectly inhabit Al Westward, aka Nero. His warm, lagubriously accented voice helps infuse the whole with both tension and calm to bring everything to life.

My thanks to the rights holder of The Peacemaker, who, at my request, freely gifted me with a complimentary copy of the book. Most enjoyable and Recommended.

Great story with many twists!

This is a great story with lots of plot twists. I’m not a conspiracy theorist but I could see something like this happening. I have one criticism, the narrator does not do a very good British accent, unless the point is for it to be very subtle. I didn’t even know Al/Nero was a Brit until the story told me.