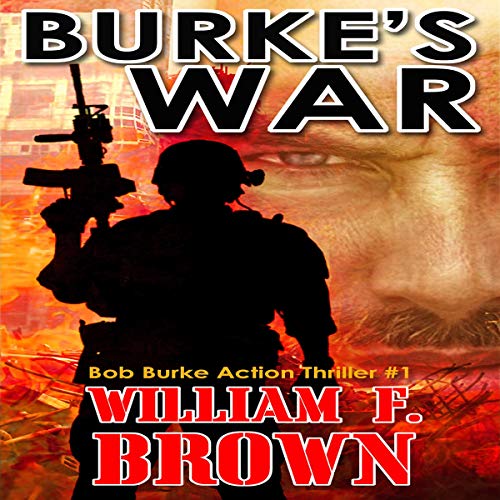 By: William F. Brown
Narrated by: Derrick Magolski
Try for £0.00

As Bob Burke’s 737 lands at Chicago’s O’Hare Airport, he sees a man strangling a woman on a rooftop below. Whether or not anyone believes him, Bob Burke isn’t the kind of guy to let a thing like that rest. He knows what he saw, and it isn't going to end well for the men responsible.

Mild-mannered and slight of build, this telecommunications company executive is easily dismissed as the "phone guy". But after four tours running "special operations" missions in Iraq and the rugged mountains of Afghanistan as an Army Ranger and Delta Force commander, he's one of the most lethal killers the US government ever produced.

His new combat zone might be a glittering high-rise office building, a suburban tract house, or a wooded Chicago Forest Preserve District park, but when the bodies start falling and a young woman needs help, The Ghost doesn’t hesitate.

After all, they started it, and he intends to finish it. And if he does need a little backup, he knows just the guys to call down at Fort Bragg. After all, it wouldn't be fair to leave them out of the fun, would it?

Looking for a good beach book or something to curl up with in front of the fire, this fast-moving conspiracy thriller is from the author of Burke’s Gamble, Burke’s War, The Undertaker, Amongst My Enemies, Thursday at Noon, and Aim True, My Brothers, with over 500 Kindle five-star reviews. Enjoy!

What listeners say about Burke's War

This is just not interesting to me, which I accept is just my opinion and review, so don't go my this review

War in a civilian environment.

Seeing a woman being murdered on a rooftop, Burke goes all out to see justice done. Cracking pace and story. We'll written -

I enjoyed the narration of Derrick Magolski , perfect for this thriller

This story is full of action and mystery, full of of revenge and action. Entertaining lead with a cast of easy to follow characters.

Another great story and good narrator, very exciting start to finish same as the last one.

This was my first audiobook for a while but it filled a trip to Cornwall and back and more.
Really enjoyed it as an introduction to Bob Burke and have now found myself sitting in the car at the end of a journey to reach a point I’m happy to stop.
Do struggle with the accent at times but that will always be the case sometimes.

From page 1 it was straight into the book. So much enjoyed the story and the characters and as soon as I finished I bought book two “Burkes Gamble” so that says it all.
A very well written and spoken storyline and has pace and action throughout. The author obviously knows his stuff and weapons as his description and knowledge is spot on. Love Bob Burke attitude and his team, in fact “love everything about the book!”
Basically Bob Burke is a retired experienced x vet (Delta Force – Army Ranger Commander and one of the most lethal killers ever produced by the army) with distinction but now a telecommunications company executive flying back to Chicago O’Hare airport when as the plane is landing he witnesses a man strangling a women on an office roof top building. On landing he reports his sighting to the airport police which then starts his troubles as no one believes him, however Bob is the kind of man used to troubles and not to let sleeping dogs lie! He is tagged,; wrongly as just a simple “phone guy” how wrong they can be. Over the next few days Bob (Code named the Ghost) takes on the killer and the Chicago mob with the assistance of his x delta force chums at fort Bragg.
Well recommended it for holidays, or just sitting down and chilling out if you enjoy fast moving thrillers you will love this book!.

As the story progressed I was slowly drawn in until I couldn't put it down. I loved listening to it and it was easily envisaged as a movie. At the end I was thrilled to see there was another book starring Burke. Truthfully recommended to both men and women.

Great story with plenty of action

Very good story with excellent narration. It kept you interested and wanting more. I look forward to the next one

This book is OK , but better editing would have cleaned it up . Narration just horrible! One of the worst I’ve listened to in years. Screeching women’s voices, and he narrates as if just reading aloud.

To look at Burke would one see him as one of the most lethal killers in the government. He is quiet, runs a telecommunications company.
What happens when flying into Chicago and sees a murder happen on a roof top, would he be dismissed or taken seriously. He gets his old gang together to prove and to see justice done that there was a murder, Great plot and the audio gave it the tension that added to the story. Well done and enjoyed. Given audio for my voluntary review and my honest opinion

I really enjoyed listening to this book. Great story! Can't wait for the next one.

Sometimes you need to do the job yourself if you w

This inaugural episode in the Bob Burke thriller series is action packed with dirty cops, mobsters, and innocent civilians not to mention at least one good guy – the telephone guy. Burke’s war sets the stage for an action hero who is just a normal guy with exceptional special forces training and a sense of duty that demands doing the right thing even when it means going up against all odds of success. Derrick Magolski’s narration brings the audiobook version of this story to life.

I listened to Burke's Gamble (book 2 of the series) first so recommend listening to Burke's War (book 1 of the series) first if you have the choice. Both books are okay on standalone basis but now some things in Gamble make more sense. Plan a few minutes to get use to the narrator Derrick, once I listened to him on Gamble, it was natural to hear him tell the story of War.

Bob Burke the phone guy (ex-Army major) witnesses a roof top murder as his plane is landing at O'Hara. Bob plunges head first into dragging a number of people into an investigation which goes nowhere. However; the bad guys now know something is up. And in Chicago area the mob is part of the group of the bad guys.

Aided by a Chicago police lieutenant and several office workers at the site of the "murder", Bob gets into several situations and the body count starts to mount and the bad guys frame Bob. Eventually even Bob needs some help and he calls one of his former sergeants to assemble a team to help him out.

Lot of action, some graphic descriptions of events.

Now I know what happened to Bob's first wife and how he meet Linda his wife in Gamble along with other characters found in Gamble who where not members of Bob's Army team.

This isn't your daddies war

None stop action, mafia hit men, dishonest police, politicians and plenty of graft. Gee what's not to like. It all starts with a guy on an airplane that has maybe one too many alcoholic drinks as he looks out of his first class window and what should he see- a man and woman on a roof top. Okay so what, So What You Say- he's killing her that's What. Yes that's right he's killing her and the only witness is in airplane about to land at O'Hara airport in Chicago. He makes a fuss he tries to get the flight attendant, his work associates, hell anybody to look out at the bizarre scene taking place on that roof. No one believes him, he has been seriously over served and he is seeing things. When the plane lands the police are there to met and greet our not so happy drunk. If you want to know what else happens you''ll have to read the book. O boy. o boy wait to you find out what he does next.

I first read this book a few years ago as an e-book. Thanks to Audible and the author for sending me a free download in exchange for an honest review of the audiobook.

Bob Burke looks out the window of his plane as it’s landing at Chicago’s O’Hare Airport, and he thinks he sees a man strangling a woman on a rooftop.** But when no one believes him, what’s a guy to do? Well, if you’re a former Army Ranger and Delta Force commander, you get your old gang back together to help you find a killer.

Bob Burke is a great character. Physically reminiscent of Chuck Norris, he’s an absolutely lethal force in the body of an unassuming, normal-looking man. In temperament, he’s like Patrick Swayze from Roadhouse: cool, calculating, and nice, until it's time to not be nice.

This book is fast-paced, funny, and never boring. The narrator has a great voice, and does a good job voicing the various characters. Highly recommended.

** I'm not sure that you can really witness a crime on a rooftop while you're flying overhead on an airplane, but you’ll just have to suspend your disbelief on that one point. :)