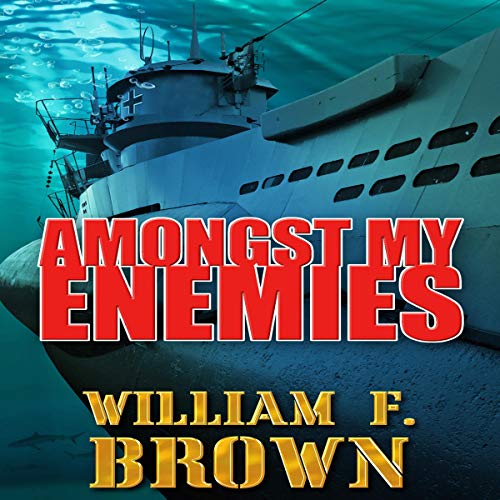 Inside an old German U-Boat rusting on the bottom of the Baltic are millions in gold bars, stolen art, and a secret that could tear NATO apart. In this military political action thriller, the only one who knows the truth is Mike Randall, a battle-scarred American who survived four months in the frozen Hell of northern Germany at the end of the war. When he does speak up, he puts a target on his own forehead, one which the Russians, the West Germans, the U-boat's former owners, the Israeli Mossad, and even his own government quickly take aim at. In this mystery and suspense thriller, some want the gold, some want Randall dead, and some want proof that there is a high-ranking spy inside NATO itself. Randall's wants are much simpler in this sea adventure. Caught between the Kremlin, spies, killers, and a new, deadly, 4th Reich, he wants his revenge and to satisfy some old debts with a steel-jacketed bullet.

A fast-moving action adventure, Amongst My Enemies is historical fiction and a Cold War spy thriller from the author of The Undertaker, Thursday at Noon, and Winner Lose All.

What listeners say about Amongst My Enemies

Another great story start to finish, all action lots of historical information, one of the best ones.

I would have give this book five stars except some of the narration just about drive me up a wall. The voice of Leslie was awful and there were times the portrayal of the Swedish accent just about drove me up the wall. Considering the amount of effort and I am sure production bucks to include background music and sounds, maybe the producers could have spent a little more for an additional narrator. Now, when the narrator talked from the stance of a third person, I enjoyed the narration.
Otherwise, this story was jam packed with action and kept me at the edge of my seat. As I write this, I still have 2 1/2 hours left to the book so I don't know how it ends although I think I have a good idea what will happen.
Well worth the credit even though I found Leslie totally irritating.

Not an audiobook but a poorly done audio drama

This recording is full of sound effects and music that is so out of place that I couldn't continue to listen. If the same book was done without all the fluff, it may have been worth it. Right now, it's awful!

Would you consider the audio edition of Amongst My Enemies to be better than the print version?

I love audio books because the narrator is able to speak with the accents of the various characters and it makes them more alive than a print version. Because much of this story took place outside of the U. S., the accents were even more entertaining.

What was one of the most memorable moments of Amongst My Enemies?

There was no one moment. I enjoyed the story as a whole.

What does Lee Alan bring to the story that you wouldn’t experience if you just read the book?

Once again, I enjoyed the various accents he used for the characters.

Imaginative and fast-paced plot will entertain throughout

Mr. Brown, please write another book. I have read all five and I want more!

Kept my interest throughout.

What made the experience of listening to Amongst My Enemies the most enjoyable?

I just finished the audiobook. The story line kept my interest from the beginning. The narrator was one of the best I've heard, and I listen to a lot of audiobooks. His ability to give each of the characters a distinctive voice made it a great listen, and the music and sound effects made it seem like I was listening to a radio show. What more can I say...interesting story line and outstanding narrator and sound effects. I don't want to give away the plot twists and turns, but they're there. Prepare to be entertained.

It kept me on the edge of my chair, especially the last hour or so.

Have you listened to any of Lee Alan’s other performances before? How does this one compare?

A good story that shows us a side of WWII of a fighter plane that was successful in their mission, only to be hit by the enemy. as they started their return. Only Mike and Eddie were able to bail out. Giving us a look at Mike a U boat and revenge for the desth of his friend Eddie. The story was well done, and the narration added to the story. Giving us a setting of radio days with the different voices and background. Given audio for my voluntary review

Tall and blonde,he was a picture perfect Nazi

Borman was he dead? And those rumors of missing Nazi gold, paintings,, jewelry and even the walls of amber looted from Russia; but I'm getting ahead of myself that all came after the war. Instead let us focus on what happened to those poor souls that slaved for the Nazi's in all the countries that have fallen under the German onslaught during the war. It wasn't just the Jews, no it was also captured soldiers from Poland and other countries as well as downed American airmen that slaved, starved and died. One that survived, not only survived but he had a promise to keep to his buddy-' make them pay, somebody has got to make them pay, promise me'-yes Michael said to his dying friend I will. Yes a promise made to a dying buddy. It took him years to prepare and even more years to do what he promised.You may be asking yourself how did he do it? It will keep you on the edge of your seat, what action, what drama, read all about it.

This story by William Brown has it all, action, intrigue, spies, loss, love and redemption all wrapped up in a narrative that grabs the reader/listener from the initial scene and refuse to let go until the final scene. As in the previous spy vs spy book Winner Lose All, this story is set during and after the final days of WWII and centers around a Nazi submarine, an American prisoner of war and a cast of characters that would make an enjoyable movie. Mr. Brown has a knack of creating very believable characters who are in most cases ordinary people who encounter difficult situations and take on the challenges life has dealt them. Once again Lee Alan’s narration brought each of these characters alive and enhanced an already excellent story.

The main character is motivated by the need for people to believe his story, why would someone care about that? There was another scene where the main character confides to a father that he wants to have sex with that man’s daughter, who does that. Then finally they go on a salvage mission and choose the participant like kids would do in some imaginary game.

I suppose I'm biased, because the author is my father, but I really liked this book. It's a classic World War II thriller, but very well done. Just when you settle in, expecting the plot to go in one direction, it changes course to a different, more interesting direction. Several characters are well-developed, and each one is given a satisfying ending. You should totally buy this book for you and all of your friends!