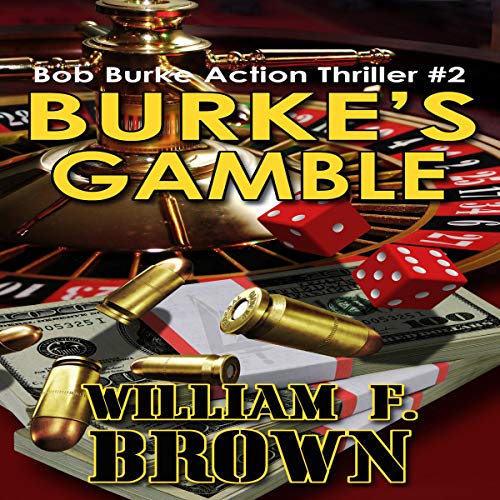 By: William F. Brown
Narrated by: Derrick Magolski
Try for £0.00

"Bob Burke is back! It’s the American Sniper meets The Godfather, Round #2, or Bob Lee Swagger takes on the New York City mob.

Mild-mannered and slight of build, this telecommunications company executive is easily dismissed as the "phone guy." After four tours running "special operations" missions in Iraq and the rugged mountains of Afghanistan as an Army Ranger and Delta Force commander, he's one of the most lethal killers the US government ever produced.

When one of his old NCOs takes a header from the fifth floor of an Atlantic City casino run by the infamous Genovese and Lucchese NY mob families, someone’s going to answer for it and payback’s gonna be a bitch!

This time, it won’t be a "Gumbah" hunt with sniper rifles in a Chicago Forest preserve park. Bob and his Merry Men are going to take the Mob’s money, all of it, from a Mafia Don holed up in the casino’s penthouse, backed by a dozen mob gunmen and an elite team of foreign mercenaries.

While there’s always a place for a Barrett .50-caliber sniper rifle or two, this time Bob calls on a pair of baby-faced computer Geeks, a two-star Army General, a Chicago homicide detective, a female Air Force pilot, a Russian computer programmer, one of the world’s most renowned pickpockets, and his new wife, Linda. From stealth helicopters to luxury yachts, fishing trawlers, and bodies in 55-gallon oil drums, the action is non-stop.

Whether you’re looking for a good beach listen or a thriller to listen to in front of the fireplace, put this fast-moving action adventure novel into your cart, from the author of Burke’s War, Burke's Revenge, The Undertaker, Amongst My Enemies, Thursday at Noon, Aim True, My Brothers, Winner Lose All, and the Cold War Trilogy three book boxed set. Pick one up and enjoy!

What listeners say about Burke's Gamble

l loved both this book and its predecessor, Burke's War. This story was gripping all the way through. The characters were well defined and you ended up really appreciating Burke. I hope he and his team appear in further books. Highly recommended.

This was the second Bob Burke book and I found it enjoyable again.
Looking forward to hearing Burke’s Revenge!

This is a really good book. This man Burke is not to be messed with. I will definitely listen to the next one. This author knows how to craft a good storyline. Highly recommended.

After Vinny Pastorini lost a ridiculously large sum of money in an Atlantic City casino, his old army officer went in to sort it out. But Vinny dies, a so called fall from a window. Not their fau!t, said the casino security. They'd rather have had the money. Time for a funeral, then to find out what really happened. An excellent, absorbing action thriller filled with well developed personalities, interesting twists and turns, and fight scenes. Involving different hard hitting groups from the mafia to the military, expect explosive excitement throughout.

Narration was by Derrick Magolski, who gave a good performance which further enhanced the story as a whole in addition to giving even greater substance to each individual character. Great writing, good plot, charismatic characters and an excellent narrator. This was a most enjoyable listen, and one I wholeheartedly recommend to all thri!ler readers who like to be surprised and enjoy a little humour along the way.

It is still early days for me with Audio books but this great story written by William F Brown and narrated well by Derrick Magolski. This is the second book in the Bob Burke's action thriller series which has much the same crew as in book one, but in this story it is all about one of their own men being is killed after being thrown out of a casino window. If is what action you enjoy you have got it with this book with action all the way building up to a massive confrontation at the end with the “good guys” winning the day!
A very enjoyable audio story told in an easy listen to manor and it is very easy to get into the story-line and plot. It has some really exciting and full of great action bits. It builds up much the same way as in the Burke's Law being the first book in this series in fact carries on much the same vane with Burke and his team doing what they do best. It starts with one of Burke’s team being ruthlessly killed at a casino and Burke with the aid of his team investigating and then seeking justice against someone who believes they are invincible. Which normally maybe true but with Burke not so; so against all odds they go to take those responsible down!
Downside was for me some parts didn’t keep my full interest the same as with book one which was a great shame; But if you like action-packed thrillers with all out action and the bandies getting their just reward then this is still worth getting and listening too. William F Brown writes in away you can't help but like, it is easy going well written thriller with convincing and realistic characters and a favourite author of mine.

Outstanding tale of action and keeps you listining

This was well written, and the performance was great as well. I thoroughly enjoyed the book. I am now going back to listen to the 1st in the series " Burkes War" If you like action and adventure look no further. I have become an instant fan

I loved the first book and now this one. Can't wait to start the third one.

I first read this book a few years ago as an e-book. Thanks to Audible and the author for sending me a free download in exchange for an honest review of the audiobook.

In this sequel to Burke’s War, one of Bob Burke’s old friends is thrown out of a fifth story window in an Atlantic City casino run by New York City’s infamous Genovese and Lucchese families. Once again, the former Army Ranger and Delta Force commander puts together a team to get revenge.

Bob Burke is a great character. Physically reminiscent of Chuck Norris, he’s an absolutely lethal force in the body of an unassuming, normal-looking man. In temperament, he’s like Patrick Swayze from Roadhouse: cool, calculating, and nice, until it's time to not be nice. This book adds several entertaining new characters to Bob’s gang of Merry Men, including his wife Linda, a pickpocket, and two hilarious computer programmers.

This book is fast-paced, funny, and never boring. The narrator has a great voice, and does a good job voicing the various characters. Highly recommended.

Burke is back with another action fast pace story. To help a friend in Atlanta.City, which now looks like murder, he is dealing with the mafia, casino boss. His Delta Force group come and a war is on to prove it was murder of his friend. The narration was superb and added to the story. Given audio for my voluntary review

WOW! I hated for this book too end but I couldn't read it fast enough to satisfy my curiosity about what would happen next. This was none stop action from start to finish. Women, gambling, the mafia and enough bodies litter the pages and would make any man happy to sit down and read this book. I think I have found another good author that writes great action thrillers, I'm going to follow this guy I might even get some free books. Well I can dream can't I?

What appears to be a gambling debt problem in Atlantic City quickly becomes a situation.

I was fortunate enough to receive a review copy of the audio book of Burke’s Gamble, and having never read any of the Burke’s series I was a bit hesitant to listen to this second book without the background from Burke’s War. Well my hesitance lasted for about the first 10 minutes of listening and at that point I was hooked and not overly worried about what may have come before this book. Rest assured having ow experienced this action-packed thriller, I’ll be reading/listening to Burke’s War as soon as I can.
Being familiar with Bill Brown’s writing style from reading/listening to some of his other series I knew his characters would be well developed, believable, and each would have some human flaw/failing. Yep Burke’s Gamble didn’t disappoint in this regard, in fact it didn’t disappoint this listener in any regard, it’s a homerun! The story line is tight, and the action is intense as well as non-stop. Bob Burke is a bad-ass, and I’m now a total fan of this series.

Bill Brown's books are just fun to read and listen to. Bob Burke is a badass on the level of Mitch Rapp and Scot Harvath although he has to be pushed a bit more to take action... but when he does he doesn't go for half measures. His crew is a mixed bag of personalities. Now that I think of it, Burke and Co. remind me more of David Baldacci's Camel Club (a 5 book series that ended way too soon)

I'd read the Kindle version of this and was excited to find out that it was available as an audiobook. The narrator did a great job giving voice to the characters. The only reason I gave his performance 4 stars instead of 5 was that I'm 99% sure he was Canadian. Every time one of the US Army guys said, "Aboat" or something like that I cringed a tiny bit. Other than that he was great. Just looked it up. Canadian. LOL

I've read several of William F Brown's Books and have enjoyed them all. I just bought the 4th book on kindle.

Disclosure. I got the audio version of the book with a free code. I paid for the Kindle version.