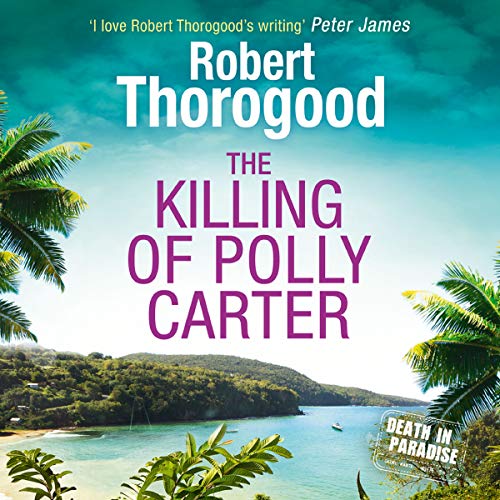 The Killing of Polly Carter

By: Robert Thorogood
Narrated by: Phil Fox
Try for £0.00

An original story from the creator and writer of the hit BBC One TV series Death in Paradise, featuring on-screen favourite detective DI Richard Poole.

Supermodel Polly Carter was famed for her looks and party-girl lifestyle. Now she's dead, apparently having thrown herself from the clifftop near her home on the island of Saint-Marie. Those who knew her say Polly would never have killed herself...and when he is called in to investigate, DI Richard Poole is inclined to agree there is more to Polly's death than meets the eye.

Already fighting a losing battle against the intense summer heat of the Caribbean, Richard now faces fresh adversaries: a stream of alibis; a host of conflicting motives; and, worst of all, a visit from his mother. A frenzy which would surely allow a murderer to slip away unnoticed...yet Richard is certain that the guilty party is still on the island.

As his team closes in on Polly's household, Richard becomes convinced that the model's death was an inside job. And he's determined to prove who planned the killing of Polly Carter and why....

What listeners say about The Killing of Polly Carter

Another great story by this author. In this one we learn more about DI Richard Poole and his parents and why he is the way he is.
The killing of Polly is another "can't possibly happen" crime story that has lots of twists and turns and blind alleys. It has all the usual Death in Paradise characters. Richard as always is brilliant especially at the end with his Poirot type explanation. This is a good "who dunnit " It also, at times, makes you laugh and smile. Brilliant.

I wanted more of these two than the two seasons I got on the TV and this story didn't disapoint. loved the story looking firward to the next one.

Kept me guessing to the end. Thoroughly recommended. Listened to Carribean story in the snow of England!

I really love these. Great fan of the stories and Tv programmes. Just hope they don’t stop any time soon. Got all in audible and kindle which I can read over and over.

Really enjoyed it , have watched series so made it all much more real . Easy to follow.

great listen for anyone who also likes the TV show. lots of twists and turns and funny moments.

Loved it from beginning to end. A few twists and turns and in typical style there's a result.