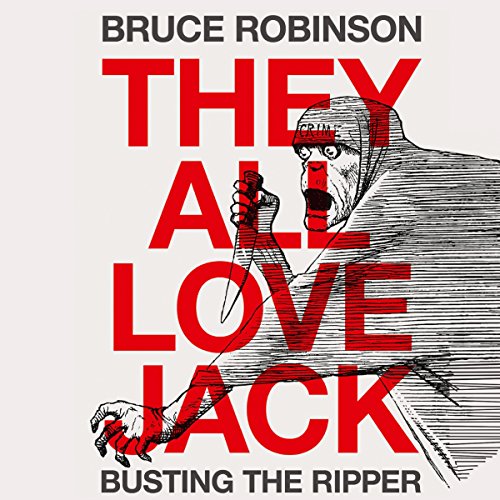 They All Love Jack: Busting the Ripper

A book like no other - the tale of a gripping quest to discover the identity of history's most notorious murderer and a literary high-wire act from the legendary writer and director of Withnail and I.

For over a hundred years, the mystery of Jack the Ripper has been a source of unparalleled fascination and horror, spawning an army of obsessive theorists and endless volumes purporting finally to reveal the identity of the brutal murderer who terrorised Victorian England. But what if there was never really any mystery at all? What if the Ripper was always hiding in plain sight, deliberately leaving a trail of clues to his identity for anyone who cared to look while cynically mocking those who were supposedly attempting to bring him to justice?

In They All Love Jack, the award-winning film director and screenwriter Bruce Robinson exposes the cover-up that enabled one of history's most notorious serial killers to remain at large. More than 12 years in the writing, this is much more than a radical reinterpretation of the Jack the Ripper legend and an enthralling hunt for the killer.

A literary high-wire act reminiscent of Tom Wolfe or Hunter S. Thompson, it is an expressionistic journey through the cesspools of late-Victorian society, a phantasmagoria of highly placed villains, hypocrites and institutionalised corruption.

Polemic, forensic investigation, panoramic portrait of an age, underpinned by deep scholarship and delivered in Robinson's inimitably vivid and scabrous prose, They All Love Jack is an absolutely riveting and unique book, demolishing the theories of generations of self-appointed experts - the so-called 'Ripperologists' - to make clear, at last, who really did it, and more importantly, how he managed to get away with it for so long.

Praise for Withnail and I: "It is an outstandingly touching yet witheringly unsentimental drama of male friendship, a bleak up-ending of the English pastoral dream, a piece of ferocious verbal inventiveness - and, without question, one of the greatest of all British films." (Kevin Jackson)
"One of Britain's biggest cult films." (Jamie Russell, BBC.com)
Praise for The Peculiar Memories of Thomas Penman: "This book hums with particularity and vision.... Thomas Penman is the work of a genuine prose-writer - and a gifted one at that." ( Observer)
"Robinson careers brilliantly through the illicit fascinations and sickening thrills of adolescence." ( Select)
"This book is in a league-table of revulsion all its own." ( Sunday Times)
Praise for Smoking in Bed: "Enthusiasts will relish his razor-sharp wit and comic timing." ( Scotland on Sunday)
"Furious and lyrical." ( Sunday Times)
"Robinson's conversation is a work of art." ( Guardian)
"The recollections of Robinson are a treat." ( Independent)
"The next best thing to a one-on-one." ( Time Out)

What listeners say about They All Love Jack: Busting the Ripper

It is not a typical forensic true crime work, Bruce Robinson declares his agenda against the Victorian establishment from the first sentence and never lets up. This is both a strength and a weakness, it makes for some entertaining prose but at times it does feel like he is labouring the point.

Has he found the Ripper? Possibly. He has clearly unearthed many correlations that would be difficult to explain away as mere coincidence, but at times I would have liked more cold scientific analysis of his extensive research. Although as the author himself has stated, this will be the job of another writer.

If, like me, you have a casual interest the case (i.e. read a couple of books, seen a few films and documentaries) then you will enjoy this book and find out things about the murders, and the general history of the time that you did not know. If you are one of the "Ripperologists" that Robinson derides, then you will probably pull it apart and spend the whole 30 hours annoyed at his certainty.

One warning: if swearing and the use of the "F" and "C" words offend you, then stay away!

I've always been a fan of Bruce Robinson and of the Ripper mystery. This book is one of the most compelling, disgusting, rewarding, horrifying, frightening and enjoyable books I've ever read. A triumph of research and argument it is totally convincing in its thrust at solving this who done it if who done it's!!! 10/10 every time...I loved it!!!

I have always had a deep fascination with anything Jack the Ripper, so when I saw this book I felt sure it was something I had to read. I was put off to begin with due to the size of the book, so decided it was best tackled via audiobook. What a treat this has been, I thought the performance was brilliant and really added to my enjoyment of the book. I don't think Mr Robinson has left a stone unturned as far as Ripper material goes. If you are easily offended then this is maybe not for you, there is a lot of swearing, and I mean a lot! I found its use hilarious and it just added to the story, I know many may not agree. Robinson, in my opinion, provides a very convincing argument as to why he believes he has solved the Ripper case. And as we will never really know who Jack the Ripper truly was I think it is as good a theory as any other.

This is an amazing piece of work. Absolutely gripping stuff. The story is much deeper and more shocking than we all believed....and we thought it was shocking to start with!

A compelling story but tiresome presentation

Dear Boss...The arguments made by Robinson are often a little fanciful and flawed, not least the very last line which is, frankly, as bonkers as the Ripper himself. Perhaps Robinson had spent too long in Jack's company by that point. Nonetheless this book is an extraordinary piece of research, written with conviction, flair and justified anger towards those who failed - deliberately perhaps - to find the killer. Unfortunately, Robinson couldn't bring himself to present his own book and though the actor has a nice voice, he does adopt an irksome tone which ranges between that of a pedantic wally who writes angry letters to the council about potholes and a sort of whining petulant wheeze, both of which become very irksome when coupled with Robinson's writing-style. The book is fantastically persuasive in spite of its Olympic leaps of faith and its hysterical love of complex and at times absurd conspiracy and I loved being immersed in 19c London and far beyond. I expect I'll be pondering over some of Robinson's big questions for years to come and for that I thank him and his book. Make no mistake, this is a recommendation in spite of the voice actor..."ha haaaa".

At times I felt exhausted the sheer weight of evidence builds and builds, an informative and extremely well presented tome, I guarantee you will never look at authority and the establishment in the same way after you have read this boo, Ha, ha.

Ever since a mysterious figure ripped his way through the East End of London in the late 1880s, writers and filmmakers have focused on the identity of the perpetrator. The mystery of Jack the Ripper still exudes a fascination to lovers of murder mysteries and horror stories, spawning more theories and possibilities than any other serial killer.

In this book, writer and movie director Bruce (Withnail and I) Robinson takes a very particular view on the subject. In this meticulously researched tome, he explores the idea that the identity of the mysterious Jack was a conspiracy created and prolonged by Freemasons, the Metropolitan Police, the British Government and a bevy of coroners, doctors and bent witnesses.

I bought the paperback version of this ages ago, but as it runs to more than 800 pages and has a font size that I’d need a microscope to read, I also bought the audio version. Narrated by Phil Fox, with an introduction by the author, this is a fascinating book that uses police and court reports, newspaper articles, letters and witness statements to back up the theory that Freemason Michael Maybrick was the man behind the murders, and how his letters to Commissioner Charles Warren taunted the pudding-headed policeman with clues that even a black cat in a coal cellar at night couldn’t have failed to follow.

Robinson’s style pulls no punches and he makes it very clear what he thinks of all these alleged conspirators, using language that would put a hardened navvy to shame. Though his theory is a complex one and demands that dozens, if not hundreds of individuals must have been involved in the conspiracy, it nevertheless sounds plausible, and explains why even now certain documents are still not available for public viewing.

A fascinating and thoroughly enjoyable book that puts the scribblings of Ripperologists everywhere firmly in the shade.

Struggled through, skipped a bit, hated it.

I have read lots of the ripper stories over the years and been on the Whitechapel tours so i have a reasonable subject knowledge. I don't know who did it and have no particular 'favourites' for the role of Jack. What I would never do is call anyone who has a theory a "f****** idiot ripperologist" as Robinson does. The language used is inappropriate and unnecessarily used to slag off other ideas.
Robinson is very rapid to discredit any other named suspects i.e. Gull had suffered a stroke (so has my mate and i'm hillwalking in Scotland with him next month), Kosminski weighed less than his victims which would make it impossble for him to be Jack (Manny Pacquiao, one of the world's best boxers is 66kgs -under 7 stone but I reckon he could strangle an inebriated person quite easily).

But then we launch into Robinson's theory and it's certainly not mainstream. However hours and hours of listening to some court case involving his brother's wife's trial is just tedious. I forwarded on 2 chapters (3 hours worth) and it was still going on. America and South Africa etc etc. and the last theory being an anagram of the name he may have used if he went on a ship (which he probably didn't ) using a pseudonym which confessed to his crimes in a disjointed grammatically ridiculous sentence, is just (as Robinson might say)'F****** S***'.

If you like daft theories intensely laboured by someone who aggressively ridicules anybody who believes anything else then listen to this. For me life is too short. Ha ha

Don't get me wrong, the narration is great, and the book is well researched; particularly as the historical, sociological and criminological facts and references are apt and correct. However, the hypothesis posed (essentially that "free-masons did it!") just gets tiresome and predictable... I'm sure the author (Bruce Robinson) would read this review and assume that it was conspired by the cult itself...

This book definitely is not enjoyable as an audiobook. But, I suppose it has uses for 'academic' purposes... I.e. it's best used in paper copy, and completely boring as an audiobook.

Horrendous, bad narration, author comes across bigoted, full of himself and thinking he's very clever. If you enjoy listening to someone like Jeremy Clarkson talking about themselves and how wonderful they are, then you'll probably enjoy this recording.