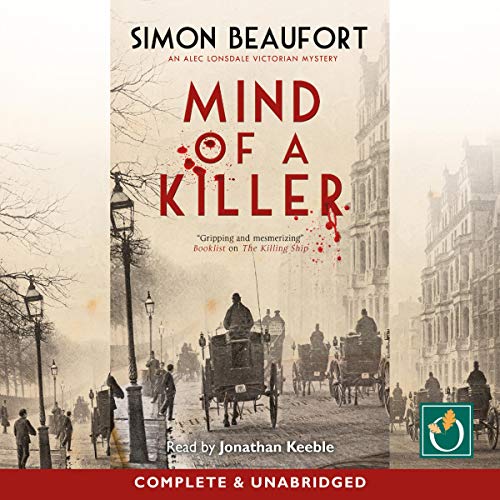 Mind of a Killer

By: Simon Beaufort
Narrated by: Jonathan Keeble
Try for £0.00

London, 1882. Alec Lonsdale, a young reporter on the Pall Mall Gazette, is working on a story about a fatal house fire. But the postmortem on the victim produces shocking results: Patrick Donovan's death was no accident. But why would someone murder a humble shop assistant and steal part of his brain?

When a second body is discovered, its throat cut, and then a third, Lonsdale and his spirited female colleague, Hulda Friederichs, begin to uncover evidence of a conspiracy that reaches to the highest echelons of Victorian society.

What listeners say about Mind of a Killer

This is a fascinating history of 19th century news coverage. I hope Simon Beaufort continues Lonsdales adventures. As a murder mystery you won't be disappointed, it is an exciting roller coaster ride, the narrator is perfect.

If you are a fan of Victorian detective thrillers then this is a must read. Unlike many audiobooks the narration is excellent and the plot gripping right to the end. I will be searching for more by the same team.

This is a thoroughly enjoyable Victorian thriller. If a full series develops from this then I will be extremely happy. The second story is my next listen/read. In saying that it speaks volumes as I normally avoid reading the next in a series straight away. Why am so much in favour of ‘Mind of a Killer’? The page and listening time is well judged; it is not over extended. Chapters are similarly well judged. It gives the impression of being very well edited. Lessons from previous series by the same lead author (Susanna Gregory) appear learnt in this co-authored partnership. (I have read eleven other books by Susanna Gregory.) Characters are clearly defined and amongst the ‘goodies’ enough spice to stir the question as to how relations will develop. Setting are varied and the use of real newspaper reports and historical events within the fabric of the novel opens up interest to the real doings of Victorian London and the wider world. I devoured this Alec Lonsdale novel over two days. There is no longueur, and it rattled along – though perhaps just a tadge less satisfying in the resolution. There is fun and humour set against the inevitable gore and squalor of the time. The performer of the audiobook - Jonathan Keeble - is exceptional. If I were an author I would want him performing all many of my novels as suited to a male narrator. He is powerfully good: a good voice; intelligent, a dramatic rendition; clear understanding of the text sympathetically delivered; a glorious range of character voices with the ability to shape a response in the listener with ease; a wonderful ability to accelerate the text at times of urgency and drama. Essentially the ‘full pack’. It will be interesting to compare with the second novel that has a different narrator. This is a genuinely independent review.

Wow, What an amazing look at the past.

I was so engrossed, It was like I was there. I listen all night last night at off work ATM. The account of the workhouse was shocking. I had a relitive who died in the Edmonton workhouse now the North Midx hospital site, Makes you wonder, I loved the story even thpugh it was abit gruesome at times. I am a Londoner & its scarey out there now, but worse then. people just dissapear in a fog. i loved Huba, she was a tough cookie & stood up to everyone. I will look to see if there are more stories by the authour & brilliant Narrator too. I wrote down what happened to these people, so I can see any photos of them. So sad about the man who really died in the delousing machine.

Not revitting. The story almost makes it as a whodunit but there are too many moments where the story gets a bit lost.

When will the next one be out?

I enjoyed this very much. So far as historical fiction goes, not as much as Graham Moore’s “The Last Days of Night,” but quite enough to have me searching for the next or prior “Alec Lonsdale Victorian Mystery” before the book was even done. (Only to be disappointed to find this was the first of the series with apparently no next one yet announced.) And I only had to look up one word (lugubrious: mournful, dismal, or gloomy). 😉😃

Book one was narrated by Jonathan Keeble and promised to make a good series great, so WHY did they change the narrator for book 2 ?! Mr Keeble really gives his all the fight scenes and the voice he uses for the waspish fiance of Jack is hilarious and perfect.

I really hope this is the beginning of a series- loved the story in this historical period, the characters, the narrator-
I have many historical mysteries in my library and found this one by chance. It is now one of my favorites.
I hope there will be many more!

Excellent narrator. I do hope this is the beginning of a series. the author and narrator made a great team.

I am now a fan of Simon Beaufort's books and Johnathan Keeble narrating them! A gripping, gritting, suspenseful story read beautifully by Jonathan Keeble. The plot twists were believable and suspenseful. I will keep watching for more books by Beaufort and hope that Jonathan Keeble is the narrator.

Well done! the reader made the story come to life! the story was great with so many twist and turns I never got bored listening!

Gears up and falls short

This book was very well-written and offered such promise until 2/3 of the way through. The reveal and ending were perfunctory and felt rushed. The ending lacked authenticity and left me feeling ‘who cares’ on an event that should have mattered. If the author had connected it back to characters who were struggling or who had lost their lives and made us really feel the inhumanity in it, she might have salvaged the entire novel.

Intriguing story, a crime novel from a reporter's perspective. Set in Gas light London, the crimes bolstered by the socio-economic aspect of the times makes this fabulous historical fiction. I was very surprised at how incredibly riveting the story and the narrator's performance was. kudos to author and production.

Open to the sequel

Hard to follow for me, so that by the time of the resolution I was fine with calling the book quits.

That having been said, I'm more than willing to listen to the sequel as I cut authors some slack and setting up a series in the first book. The pair of journalists investigating the murders work well together, and the potential love interest for Alec seems like an okay lady. My quandary is that I grew very attached to the audio narration itself, while the sequel features a different reader!

So, I'd recommend the story for its series potential, rather than the specific plot itself.

How can you make this subject sooo boring I will never know. An absolute Yawn!