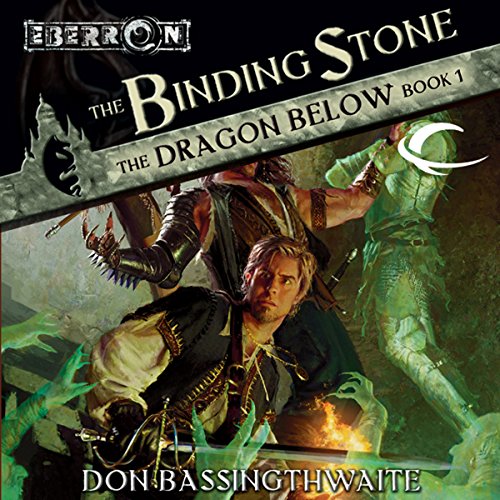 The first book in a series of dark tales and high adventure in the Eberron™ campaign setting. The Binding Stone features the brand-new races that were created specifically for the Eberron campaign setting. It's also the first Eberron novel to take its listeners on an exploration of many uncharted territories in the setting.

Played on 1.3 speed and the narration wasn't horrible. He took a page. Out of the. William shatner school. Of talking.

couldn't get past 20 mins

I love Eberron books, but this narrator is absolutely awful, he does a decent job with acting when the characters speak, but the narration of what's happening is monotonous , and slow. sounds like hes drunk..slurring his words

I couldn't listen to it without 1.25x speed, characters interesting/voiced, kept losing plot when dull

I'm not one to write a review often. But I felt I had to this time, because there are people out there that may never get past the mediocre/frustrating narrator, in order to truly enjoy the story being told.
I read these series of novel years ago, and hungrily devoured every word contained within the pages. This trilogy is what sparked my love for the world of Eberron.
Recently I was excited to see that there was an audio book version of the books I remembered so fondly. So I immediately spent my credit to pick up this audio book, and couldn't wait to listen to it.
After three hours of listening to this audio book, I had to stop because the narrator kept pulling me out of the story. Here are the reasons why:
1. The narrator had no sense of urgency, and just plodded along, even in action sequences.
2. The narrator did not pronounce the names of things correctly. This was most prevalent in his choice on how to pronounce the name of one of the main character's name - Singe. He pronounced it "sing", like "to sing a song". The proper pronunciation is "singe", like "if you stand too close to the fire, you might singe your pants". The character throws fire constantly, and has a ring that absorbs fire, so him being named Singe (a distinctly fire based moniker) makes sense. You would think that this is a minor gripe, but think about how many times you here a character's name in a story told in the third person. Every single time the narrator said "Sing" (instead of Singe), I was immediately pulled out of the story.
3. The last thing that ruined this listen, is that I absolutely detest the voice the narrator decided to give one of the main characters - Geth. This is one of my favorite character's in the story, because of his haunted past, and his gruff demeanor. Kind of like a Wolverine type personality, as he's dangerous, fiercely loyal, but always trying to do the right thing. He's a shifter, meaning he is descended from a race of lycanthopes, and has a beastial and sometimes feral look about him. The narrator, for some reason, decided that the perfect way to portray him, was as a slow, dim witted person. The slow pace of the narrator, grinds down further every time Geth has any lines. To the point that I feel the narrator thinks that Geth is learning disabled, or speaking through the verbal equivalent of molasses.

I'm one to give a story every chance, but I cannot in good conscience recommend this "audio book" to anyone. But if you have the time, I highly recommend you read the Kindle or paperback version, as this is quite the epic tale.

Book was great, narrator was not.

There were many characters in the novel and the reader strained to give each one their own accent and style, it went poorly. Book was unlistenable at base speed as the entire thing felt like it was slowed down and slurring, 1.3x or 1.4x were closer to understandable speech.

Presenter is very dry and story doesn’t catch you

Could not even get through the first full chapter. The presentation is dry and uninspiring, and what I got of the story did not keep my attention to keep reading.

Irksome. Adam Epstein mispronounces several common words. Once or twice a chapter I'm jarred from the story to reparse the previous sentence to determine what word he was trying to read. I expect higher quality from audible. And his reading cadence is like sportscaster Howard Cosell. Ugh.

The story is decent, but the testing performance is not worth suffering through.

the performer sounds like he is reading a poem

some of the character voices are well done but i kept getting pulled out of the story by how mechanical the reader's speech pattern is in his reading. he saved me from giving a 1 star by clearly identifying the voices of the characters.
The story is good overall with nice twists throughout.

I've read this book and at first it was odd to hear how the narrator envisioned the voices of the characters he read aloud. In fact Geth and the characters here were some of my favourite, so to hear the book read aloud and the voices used to portray the voices of the characters were not how I envisioned but it soon settled. The story is fantastic. It takes you to realms and regions of Khorvaire that other Eberron novels do not. It's a shame they stop producing novels. This world is fantastic and I'm not even a gamer. I just thoroughly enjoy the setting, the nations, the creatures. and the world of DnD is so thought out. I hope with 5e Eberron coming out we'll see a continuation of Eberron novels. Viva Eberron!