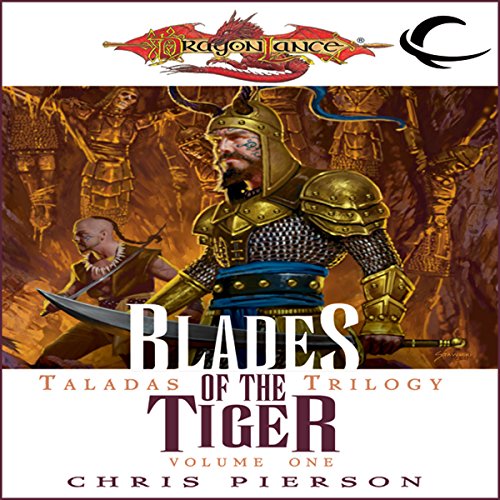 Blades of the Tiger

Blades of the Tiger

The first book in a series set in an uncharted land within the Dragonlance world. Blades of the Tiger explores beyond the realms of Ansalon, the traditional setting for Dragonlance novels, and into the land of Taladas. No title has ever been set in this unexplored region on the other side of the world, allowing for an infinite variety of new characters and experiences within the context of Dragonlance.

The War of Souls is over. Takhisis is dead. On Ansalon, heroes and gods have banded together to save the world from destruction. A new peace, of sorts, has taken hold. But half a world away, on the continent of Taladas, the troubles are just beginning. Sorcery, long thought lost, has returned to the world. Disasters wrack the land, nations clash, dark forces stir in the aftermath of the Godless Night. On the grasslands of the Tamire, an ambitious lord unites the barbarian tribes, streaming south for plunder and bloody conquest….

Among the fortresses and cities of the Minotaur League, a victorious general returns to his family after years away….

In the shadows, an elven thief tracks a mysterious enemy that seeks a stature of eldritch magic….

One will live, one will die, and one will wish for death. For ancient powers are waking in Taladas.

This book kept me up all night. It saddens me to see so few ratings for this one. It’s as good as the best.

And here we have another fantastic Dragonlance entry by Chris Pierson that was given an only mediocre audio performance.

At this point, I have to think the decided to spend the minimum possible on audiobook narration for the Dragonlance books as only a handful are more than mediocre (and many are much less).

I've said this many times, Chris is absolutely one of the great Dragonlance authors, right up there with Margaret Weis & Tracy Hickman, Jean Rabe, Richard Knaak, and Dan Parkinson.

Few of the others have been able to develop new characters who feel real and give me cause to care what happens to them.

More than the characters, though, herein Chris has finally brought to life the "other" continent that I've been fascinated with since it was first mentioned all those years ago. While it was detailed in the Time of the Dragon gaming materials, this is the first time it's been truly brought to life.

Thank you for that, Chris. And thank you for being one of the very few DL authors who actually does their research and creates stories that are accurate to the world and have the same feel as traditional Dragonlance.

I definitely recommend this book, but only to Dragonlance fans but to all fans of fantasy. This story is very clearly only the beginning of a connected story that has the setup to become something truly epic.