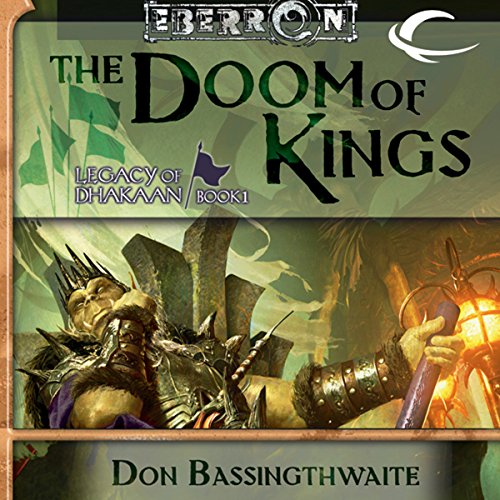 The Doom of Kings

The Doom of Kings

The return of the shifter Geth!In the wake of the Last War, a new king has risen and seeks to unite the newly formed goblin kingdom of Darguun under his rule. He seeks an ancient scepter, a symbol under which to unite his people and hires Geth, a shifter who owns one of the trio of artifacts to which the scepter once belonged, to find it. But will the artifact do what the Darguul king needs it to?

I’ve played in Eberron and DM’d it for about 4-5 years. This is the seventh Eberron book I’ve listened to and far and away the best. Robin Sachs’ gravelly voice is perfect for this and the Lore is deep.

This definitely worth the purchase. My only complaint was in the story was sometimes I found it difficult to know who were goblins and and who were humans.

The narrator was like an audio version of a nice steak house- hearty, good, and resonate.

Robin Sachs does a fantastic job narrating, with his strong and gravely voice capturing the speech style of the characters in the book. Don Bassingthwaite does a pretty good job of immersing one in the fantastic world of Eberron. Epic fantasy, battles, magic and quests are present throughout. I enjoyed this book greatly

A little too political

I love D&D, but this is a little too much court intrigue for me. word-count.