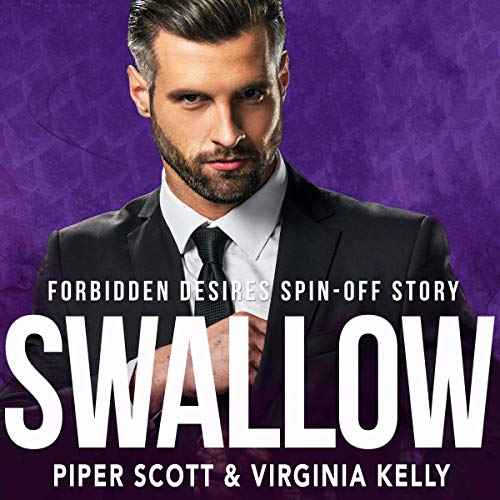 Grimbold Drake, influential patriarch of the Drake family, revels in his solitary life of order - a life which is thrown into chaos when his son pays him an unexpected visit, bringing with him a broken but gorgeous young man more than a millennium Grimbold’s junior. A man Grimbold instantly finds himself yearning to fix, protect, and claim.

Meek, subservient, and eager to please, Wally Brand doesn’t doubt the tales he’s been told of the cruel and deceitful Amethyst clan. So, when he’s forcibly taken from his home and entrusted to Grimbold Drake - the most powerful Amethyst dragon of all - he knows he won’t be long for this world.

Only, there’s a gleam in Grimbold’s eyes when he looks Wally’s way and a tenderness to his touch that Wally can’t understand. All he knows is one thing: Whether Grimbold means him harm or not, if he can be good to his dragon captor, maybe...just maybe, he’ll get out of this mess alive.

Swallow is a steamy omegaverse mpreg-ish romance set following the events of the Forbidden Desires series. It contains a broken young man who badly needs love, a curmudgeonly dragon with a heart of gold, new nicknames, familiar faces, and the sweetest dog known to dragonkind.

For maximum enjoyment, Swallow is best listened to as a companion piece to the Forbidden Desires series.

Read and listened to the audio versions of this book. I loved it so much I had to read it twice.
The series is so good, especially if you like dragons and Mpreg.
The details and the characters are lovely even when the characters are flawed.
But always am HEA even for the most unlikely. A great read. Thank you.

Daddy dragon and his little Wally

I've been greatly enjoying this series by Piper Scott and Virginia Kelly, and Michael Ferraiuolo does a wonderful job of bringing the dragons and their people to life. This was a fun insight into the big daddy of the Amethyst clan and head of the Dragon Council. He's certainly taken by surprise when Wally creeps timidly into his life. I love Wally he's such a sweet, gentle soul and I'm glad that Daddy Drake nurtures and cherishes him as he so desperately needs. Highly recommended fun dragon MPreg story.

This was a really great audiobook.
I love this story and I loved listening to it brought to life.
Definitely a must read.

The first in a spin off series following the events in the brilliant Forbidden Desires series written by Piper Scott and Virginia Kelly, narrated wonderfully by Michael Ferraiuolo.

We are back with the dragons, yay, and Geoffrey, Everard and Harry make appearances as Grimbold comes face to face with the neglect and abuse his lack of attention has caused and has regret, shame and guilt for that in the form of the young dragonet Wally, who has had a traumatic beginning, I’m not giving anymore away.

I loved the first series and this spin off is just as good so if you like hot dragons, who like to claim what is theirs, then this is the book/series for you.

The Forbidden Desires series was one of my top audiobook favorites last year, and Swallow, its first spin-off, was just about as amazing.

Michael Ferraiuolo is one of my favorite narrators and while I wasn't sure I was going to like listening to Daddy Grimwold's voice for too long—he sounds old, which well, he is and I already knew after listening to the Forbidden Desires series, LOL—but he looks hot on the cover, so it kind of ruined the fantasy for me at first. However, Michael's performance and Piper and Virginia's words won me over to the dark side and I ended up loving him despite Grimwold sounding old. Hahahahaha! He was so patient and gentle with Wally, despite being a formidable clan master and a centuries-old dragon. Wally was sweet and Michael captured that perfectly. And of course, getting to revisit my favorites, Everard and Harry, was delightful, too, which, coupled with a strong storyline and some fun, hot and even jaw-dropping, twists and turns, made for a great start to this new spin-off series. I'm already looking forward to more and I can't recommend this audiobook enough.

I wasn’t the biggest fan of Grimbold from what we saw of him before, however Swallow changed that and now I love him. Poor Wally has had such a bad past and my heart really broke for him. I loved how Grimbold helped him come into his own.

The narration really worked and I loved all the characters as portrayed by the narrator.

Grimbold is an ancient and powerful dragon. He gets to take care of Wally, a very shy and misguided omega. Their relationship is one that has to be handled with outmost care since Wally has been made to suffer and everything makes him suspicious and untrusting. It’s a very different story but one with lots of heart.
The voice of Grimbold threw me off a bit but I am a fan of Ferraiuolo so I won’t hold it against him.

I love Wally (walter) he is so sweet, he just tugs at your heart strings and the narrator did his voice beautifully. It was lovely seeing a sweet and caring side from Grimbold.

Great story, not a stand alone

I received an ARC of this audiobook in exchange for an honest review.
I really enjoyed this spin off story. It was such a sweet tale and great to see Swallow get his well deserved HEA. Although the story is about one couple, you get to see the established couple and their children too, which adds to the fun.
Michael Ferraiuolo does a great job. as the characters were already established the voices can't be changed but, and this is just my personal taste and no reflection on Michael at all, I couldn't find Grimbold's accent sexy.

Completely and thoroughly delicious. To see gruff and growly Grimbold Drake find his mate? *sigh* It was truly perfect. I couldn't dream up a better true love for him than Wally. He's adorable, and after everything he's been through at the Cloister, well he's just as sweet as he can be.

Plus there are some bonus visits from a few of our favorite characters, and scenes of Grandad Grim!

Michael Ferraiuolo is always spectacular and he rises to the occasion in Swallow. One of his finest talents is his range and variety of voices, and the stories in Piper Scott & Virginia Kelly's Forbidden Desires series are a wonderful showcase for this amazing performer.

I enjoyed the way this novel built on the world that it spun off from. Lots of cameos from past couples, which could get overwhelming for a new listener. Wally certainly had a ton of trauma to work through, it felt like he maybe got over past mistreatment a touch too easily. The villain was enjoyable to hate. Courtship by dessert is a win, and I enjoyed the way Wally's favorite fandom carried through with little details and larger themes. Well narrated, emotional listen.

I love all of the audio books in this series. The narrator does a fantastic job bringing all of these characters to life. I was very excited that the narrator didn't change how Grimbold sounds. I was afraid that he would try to tone down the gruffness of the character's voice as it sounds in the other three books. But he doesn't do that and I absolutely loved it. Fantastic job.

Awesome narrating by Michael Ferraiuolo, as always. Nice to hear his music too. Great short listen to tie up a really great series. Nice to see Grimbold get another chance at love and a mate. No one deserves a solitary life. Wally so deserves a HEA and a family to Love and protect him... Hopefully there are more stories to come, I'm a fan of the Scott, Kelly team of writing. Well worth you credit and your time. Enjoy the cameos from the forbidden desires series cast of characters...⭐⭐⭐⭐⭐

I love this series and Michael Ferraiuolo makes an amazing job bringing all characters to live. You feel the pain, sorrow, passion, love along the story. A must to read, I can't wait for the next one on line!

Grimbold gets his Mate

I loved this book, and the audio just makes it even better. Michael Ferraiuolo's narration is always amazing and he nailed Grimbold and Wally.

Wally is so sweet and his love of all things Buffy and Giles is adorable. I loved seeing Grimbold's patience and care of Wally. And it's great to see all the familiar faces. If you've read the original series, have no fear, Everard's nicknames continue. This is easily one of my favorite books and audios.

I loved the written book but the audible is better. This entire series is fantastic but the audiobooks are even more amazing. I absolutely loved it.

This is such a good story and I wish it was longer. The characters are well written and even though this could be read as a stand alone, I highly recommend reading and/or listening to the rest of the series in order to fully enjoy this book. I enjoyed Grimbold and getting to know his character more. Wally was such a sweetheart and so adorable. The Buffy references were hilarious. I thought Michael did an excellent job narrating and distinguishing voices and characters adding emotions and depth which kept me engaged to the point that I didn't want the story to end. Hoping for more stories from this series.

Be still my heart

This is grimbold's story and wally is positively heart breaking. Wally is used to being hurt and grimbold has to learn how to be tender in his old age,well old to humans anyway. I absolutely loved the story and narration.

Daddy Grim gets his Omega!!!

What an adorable novella ❤️❤️ featuring an abused Topaz omega, Wally, and the head to the Amethyst clan, Grimbold!!

Harry and Ev make several appearances, as does Steve the iguana.