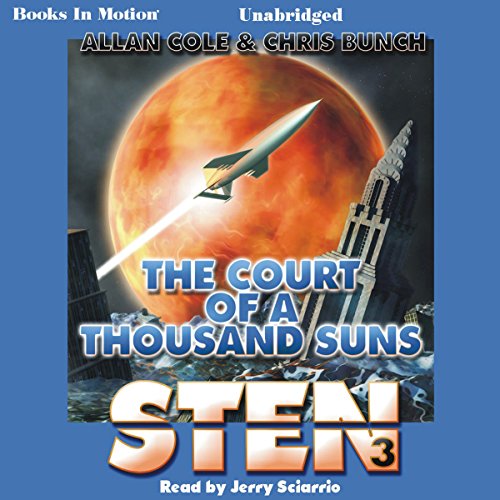 Sten: Court of a Thousand Suns

Sten: Court of a Thousand Suns

Sten had fought his way up from slave labor on a factory world to commander of the Eternal Emperor’s bodyguard, the Imperial Gurkhas. But during his first three months on Prime World, the most dangerous weapons Sten had encountered were the well–phrased lies of Court politicians. It seemed no place for an honest fighting man. But when a bomb destroys a local bar, Sten discovers the danger and corruption behind Court intrigue. Only quick work by Sten, Alex Kilgour, and a tough female detective can keep the Empire together and the Emperor alive.

What listeners say about Sten: Court of a Thousand Suns

good story line, with wonderful characters. easy to listen to when driving and well read.

I was very please with this 3rd book. Cool Action and Drama. Very Good Narration. I see that the 8th book in this series Empire's End is NOT released. I hope Audible gets it before I reach the 8th book. AUDIBLE has a BAD habbit of NOT getting ALL the books in all the sagas it has.

I really am beginning to get into these books. All have complex plots but book three is a real cliff-hanger

Another great space opera! The Mantis troopers are masters of War and they prove it once again against the Eternal Emporor's enemies.

makes even annoying commutes fun. good story with humorous characters. read by an amazing performer who nails the accents... particularly Alex Kilgore. looking forward to the next installment!