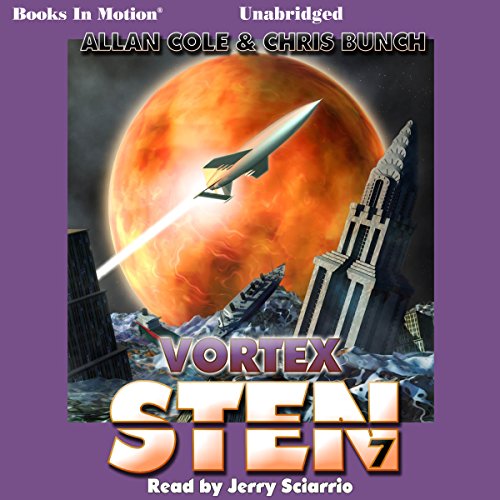 The Eternal Emperor was back and ready to save his Empire from collapse. Only Sten guessed that something was rotten at the core. The Empire is in chaos. The once great Imperial Navy has been shattered in battle and lies burning in space, driven by a civil war that threatens to engulf humanity’s future. For the revered Eternal Emperor is not the man his subjects thought him to be — and may not even be human at all. And it is Sten — Imperial bodyguard, spy, assassin, and renegade - who now leads humanity’s fight for survival. Taking command of the last rebel fleet, he sets out on a desperate quest to seek and destroy the dark source of his former master’s power. Denounced as a traitor and hunted by forces loyal to the Emperor, Sten must risk everything to annihilate the Empire he vowed to protect.

What listeners say about Vortex

this was a good story. But for something that takes place well over 3000 years in the future there are way to many references to twentieth century politics, people and literature. It detracts from the overall line.

What did you love best about Vortex?

Let me put it this way' you might as well buy book eight now because if you've listened to all 7 books, there is no way in Hell that you aren't listening to Book 8. That said, book 7 is really good. It just that you (like STEN) is left feeling a little empty. Let's just hope that Book 8 will give us all the strength to endure.