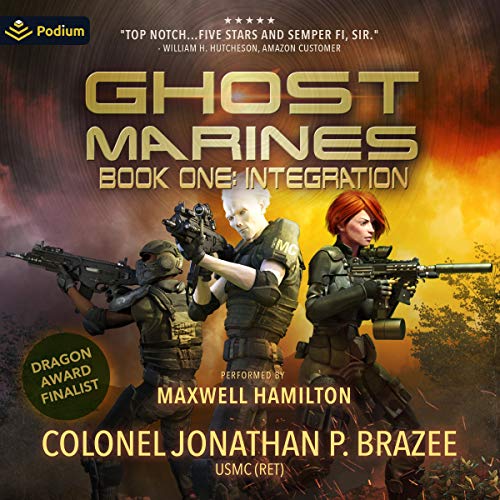 By: Jonathan P. Brazee
Narrated by: Maxwell Hamilton
Try for £0.00

Human slavers attack. Despite trying to fight back, there is nothing the young Leefe can do to save his family and friends. But he doesn't have to. The Imperial Marines arrive in the nick of time, and they hate slavers. Three tri-years later, when the new emperor issues a proclamation to integrate the imperial military with non-human citizens, Leefe is among the first to volunteer.

Integration to resurrect the empire as a force for good is challenged by centuries of prejudice against the "dung races." Leefe and the other Wyntonans only want to prove their worth and fight for the empire, but their greatest battles are closer to home.

With threats to the empire from both within and without, this grand experiment has the potential to save it....or tear it apart.

What listeners say about Integration

An insider's view of the Marine Corps -

Well written, but perhaps read by the wrong person. Hamilton's reading made everyone seem like a 14 year old boy rather than the hard men and women of the Marines.

Yes, it takes place in the future - but really that has very little to do with the story. The science fiction parts are all pretty much just magic. No explanation is given or required. The real story is about the integration of the corps by members of other races, and the experience of becoming a Marine.

Brazee tackles some tough issues of racism in this book, though by substituting different kinds of non-humans instead of using what we think of as human races (no such thing, really but whatever) he avoids some traps that would mire the book in today's social issues. The only place this falls "short", is that if you're looking for complete honest you have to include all the incidents in real live that don't work out as well as they end up doing in the book. The racism is in the story, and mostly it's overcome -- in real life it's not that simple. But hey, it's an SF novel, so take it in that spirit.

Not a grand space opera, but a series in mostly individual incidents that bring the story along.

Very much enjoyed this one. This is a story about humanity, far in the future, after having taken over multiple alien species, whereas humans are among the highest 'tiers' of society and the various alien species are generally considered lesser people. But with a new leader, it has been decided to attempt to integrate these aliens and to have a single nation which just so happens to have humans and various aliens as citizens. In return for these aliens serving in the military, they are then granted citizenship, an equal to that of a human.

That's the premise. But this book, overall, is more so a story about brotherhood, about becoming a marine and standing beside your brothers in arms, regardless of color, shape, gender, or even species. It just happens to take place within a sci fi universe which I can honestly say makes it all the more interesting if you want to learn about the politics in a spacefaring empire.

The entire point of view is from a single alien, a Wyntonan named Leefe, from the very start of his recruitment all the way to having to test himself in battle alongside other humans and his own kind. He has to deal with xenophobic humans, prejudices, and even general racism both against and from his own kind. The story feels very reminiscent of what real recruitment would realistically be like in relatively modern militaries dealing with new recruits of color in a society that isn't used to it.

The story tackles quite a lot in a relatively short amount of time, but it all fit for what it was going for. What it would be like for aliens to train alongside many humans who consider them to be lesser beings.

The narrator was perfect I think. Pronunciations of alien words and names seemed fine, although I can't comment on if they were accurate to the author's intent. I could easily tell the difference between various characters and the quality sounded clear with no issues.

The dialogue did feel cheesy/cringy at times and definitely make it feel like it had some unnecessary exposition. Characters would ask weird and simple questions or otherwise commented on things that, within the universe, should be a known position/situation/answer and felt more like a way to explain something to the reader.

Apart from that, I really enjoyed it and would recommend it for two particular reasons. If you're into military stories and want to see the process of training to be a marine for a minority(for aliens of course) or if you just want a sci fi story to see how a human government and people deal with various aliens within their society, the latter of which is what pulled me in initially.