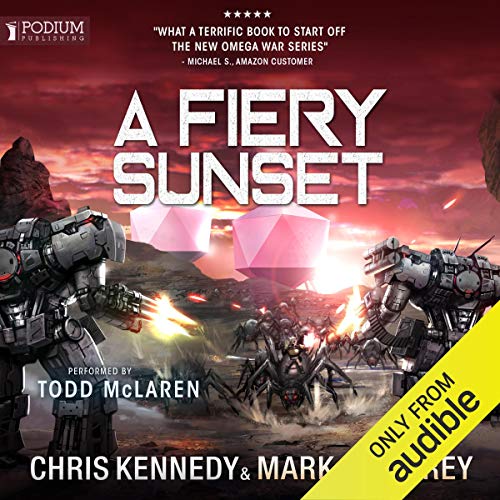 By: Chris Kennedy,Mark Wandrey
Narrated by: Todd McLaren
Try for £0.00

The Revelations are over, and the war to end all wars has begun.

The plot by the Galactic Union’s Mercenary Guild against the Four Horsemen has culminated in an invasion of Earth. Faced with an overwhelming force, the human mercs had no choice. They’ve fled, leaving Sansar Enkh to go to the Mercenary Guild headquarters on Capital Planet to stand trial for humanity.

On the run, Jim Cartwright and Nigel Shirazi have travelled to the Winged Hussars’ secret base of New Warsaw, in an effort to convince Alexis Cromwell to join the fight, while the other mercenaries who escaped the fall of Earth have gone to the perceived safe haven of Karma.

Alexis Cromwell is reluctant to commit to an unwinnable fight, though, and there is no safety to be found in Karma. When the Mercenary Guild Tribunal is revealed to be a sham, the Horsemen are forced to choose - is it better to hide and protect the human race, or is it time to fight for what they believe in?

All is not as it seems, though, and the galaxy stands poised on the brink of a second Great Galactic War. Vastly outnumbered, the Four Horsemen had better come up with a stellar plan, or for them, it might well be a Fiery Sunset.

What listeners say about A Fiery Sunset

Humans vs. the rest of the Galaxy

Jim Cartwright and fellow escapees, meanwhile, head for New Warsaw, a secret base of the Winged Hussars, headed by Alexis Cromwell, to ask for help in fighting the Guild. Now the Guild is about to learn just what being a human means.

I have not followed previous Horsemen books, so am not really invested in their story. However, this was a good book on the whole; plenty of action.

loved the story and the narration

I really enjoyed the continuing story of the four horseman. earth gets invaded by the mercenary guild. ass is kicked. no names are taken. read it. it's fun.

Funny thought the narrator sometimes sounds like winne the pooh. I keep picturing Winnie the pooh at station punching buttons with a honey covered paw

I love this series and I love these authors. Coming off of RA Salvatore‘s Drizzt series, A science-fiction story with strong undertones is a breath of fresh air. And this story in particular narrated by Todd McLaren was very well performed. The downside with some of these voice actors, you just don’t understand what they’re saying during some of his horrible performances. No matter how many times I rewound they still don’t even understand what they’re trying to say in these terrible voices.

had a hard time finishing

It didn't pull me in enough to want to listen to the sequels. This book became very forgettable for me, because I was hoping to get caught up in a new series.

A good start on a galactic war series

Chris Kennedy and Mark Wandrey combine to write an exciting Book 1 to a galactic war series. While a bit rough in parts, it holds up well as a whole. The primary protagonists are the Four Horsemen Mercenary group, with each of the four heads being being the primary characters. The authors do well to expand the groups to include additional character building to other secondary characters, as well. Of the four heads, Jim Cartwright seems to be the primary MC. The thing that is odd about this is that the authors have him as a 300+ lb 20 year old rather than the typical middle-aged, totally buffed and grizzled type which makes for some interesting situational encounters.

Todd McLaren is one of my all-time favorite narrators who, for me, earn his fine reputation during his participation in the Halo series and he continues to perform equally well in this book.

An excellent beginning to a new series in the 4 horsemen universe. Anyone who read the revelation cycle would really like this book.