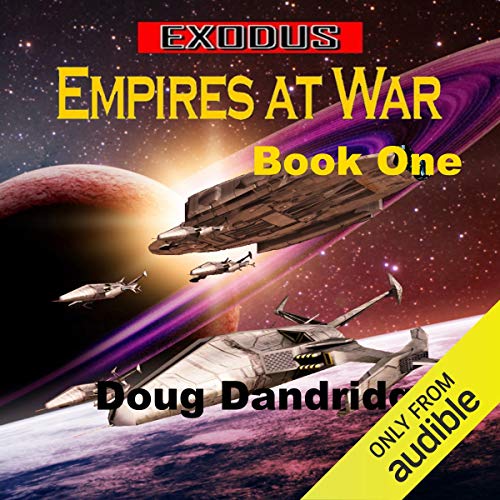 By: Doug Dandridge
Narrated by: Finn Sterling
Try for £0.00

Humanity's worst nightmare has again come out of the Dark. Can a human race in turmoil survive?

When the human race faces extermination at the hands of an expanding species the last survivors travel 1,000 years to reestablish the race 10,000 years away. It is now a thousand years after the birth of the New Terran Empire. The race has aggressively expanded during that time, with a fleet that has never lost a war against an alien species. But the signs are there, the old enemy is back, and the Fleet will face its greatest challenge in a foe 50 times their size.

Science fiction in the tradition of Anderson and Weber, where the physics of normal and hyperspace dictate the strategy and tactics. Enormous fleets battle across the immensity of space with advanced technologies. Can the proud human Fleet hold off the tide of an advancing enemy, rallying allies and deploying new tech? Or will the conquerors achieve what they could not 2,000 years before, and end the existence of the upstarts.

Difficult to say but it certainly was not for me. I stuck with it to near the end and decided it was total waste to time and a credit. Should have returned it under the superb Audible returns scheme.

What could Doug Dandridge have done to make this a more enjoyable book for you?

Tightened up the plot considerably.

If you could play editor, what scene or scenes would you have cut from Exodus?

I really don't like giving poor reviews but on this occasion ...

Quite enjoyable, and the author is clearly a David Weber fan, using several ideas from both The Honorverse and Safehold series. If you know both series, it's quite entertaining spotting them. I enjoyed it enough to want to know what happens next, though the narrator is fairly dire., particularly his 'women's voices, which are more than a bit on the squeaky side.

A different worldbuilding/background (which is interesting BTW) and less political-philosophical meandering. But in in most other aspect this is a good substitute to for any abstinence in wating of the next Honor Harrington book.
The characters are less engaging, but this may grow over time as the author gets to know them.

The narrator is good, but sometimes he forgets/fails to change the voice between different charcters.

Not without the sequel being better. Verdict is still out on this story.

The problem with this story is that, after the beginning, not much happens. Having read the description, you'd think that you're in for some war between empires, but by the end of the book, you're very much still waiting for that to happen.

There is an interesting build up, but this is spoilt a little by the unbelievable baddies, all of whom seem to have no redeeming or believable qualities what-so-ever. The Prime Minister reminds me of the baddy who appeared in the Honor Harrington series (the one who tried to jump her in the shower) and that's not a good thing, given how poor that series was (until I got so fed up that I gave up on it).

Hopefully future instalments will pick up the pace a bit and won't try to drag things out needlessly in a poor attempt to sell more books (*cough* David Weber *cough*). It would also be nice to see some reasoning and believability with the villains in the story. Also, something which makes the main characters a little more memorable too.

What did you love best about Exodus?

Doug Dandridge combines a healthy dose of in-depth technical description with excellent story telling to paint a realistic backdrop for his "Exodus" series. Not having read much of this genre in recent years I was pleasantly surprised with the way this story developed setting the stage for for future novels while still delivering a great deal of action both in space and on the surface. This is not just ship to ship combat. There are plots and sub plots a plenty that make this story and the characters come alive.

Great Book -- but Book 1 by itself is frustrating

I loved the story, but what it is is a book-long "setup". Unlike some books written in volumes, this story does not stand well by itself. By the time Book 2 arrives I may have to listen to this book again to regain the storyline in my head. Unlike J.K. Rowling or Jack Campbell, in which each book was a story in itself, "Empires at War" does not stand alone well.

It is a great book and will probably be a great series. If you read it now, you will have to wait for Book 2. That to me is frustrating.

This book is mostly stage setting... The next two books are more action packed. All are well worth your credits and time. If you like the stuff from Jack Campbell (Lost Fleet) and Mike Shepperd (Kris Longknife) you will like these books.

Lots of plot building with little action. Many characters have been introduced but none of them have achieved anything. Hoping book two will make some use of storylines.

Only Buy If You Are Desperate

I usually don't write reviews of books I don't like. Call this a lukewarm, mediocre review. First, the good: The premise is engaging and is set forth in the prologue. Earth is destroyed by aliens and a small ship of survivors makes its way a 1000 light years away to start over. The story opens 2000 years later. Obviously, the plot line will be the aliens re-discovering the hated humans (who assassinated the Emperor's son) and utterly destroying them. The archetype myth becomes David (the human empire) v. Goliath (the alien empire). Except the humans have advanced to within 20 years of technological parity with the aliens. Almost a fair fight. Pretty interesting idea.

The bad: The narration is just awful. Mr. Sterling has narrated some gay romance stories (at least that's what they look like to me on Audible) so I am surprised at how poor this narration was. His accents are terrible. His inflections are all wrong. Just bad reading. No excuses for this. If he had a director, the director was asleep. If no director, he needed one. I will say that he improved his diction and reading as the book progressed.

More bad: This is obviously going to be a serial series. However, I cannot understand why Mr. Dandridge takes the time to develop characters and then kill them off. It does not add to the plot development. In addition, the bad guys, of which there are a number, are stereotypes with no depth, motivation, or understanding. They are cliches at best. And, I have no clue how all of this will play out in the coming books. It's a cheap way to build suspense, in my opinion, and adds nothing to the overall trajectory of the plot.

Still more bad: The plot wanders all over the place with no real logic or direction. As a reader, I am trying to make sense of how all of this ties together. I can't. We move from micro-moments with characters that are likeable to grandiose movements with no connection. There are too many loose ends and dead ends.

This book could have benefited from a re-write and editing and from using a different reader. Oh well. Caveat emptor.

What did you love best about Exodus?

I thoroughly enjoyed the story, but it was very difficult to get through because of the terrible narration.

He didn't even try to capture any kind of emotion in any of the characters voices, he was decent with a few characters with accents, but otherwise very monotonous and uncaring. He needs to stick to gay romance novels and leave sci fi to the great narrators like Jeffrey kafer

If you don't want anything to happen but you like character identification this is your book.

Would you ever listen to anything by Doug Dandridge again?

I would need to research on the plot.

Would you listen to another book narrated by Finn Sterling?

Yes the narration was fine.

If you could play editor, what scene or scenes would you have cut from Exodus?

The 12 hours of character introduction could have been done while something was happening. Or summarized into 1 hour.

being the first book in a long series there was a lot of background build up. after the background it takes off full speed

I enjoyed this novel quite a bit. I look forward to reading the next book.

What would have made Exodus better?

Need a different someone different to Narrate. Story is disjointed and hard to follow with all of the different threads.

Would you ever listen to anything by Doug Dandridge again?

Didn't do justice to the characters when reading their conversations.