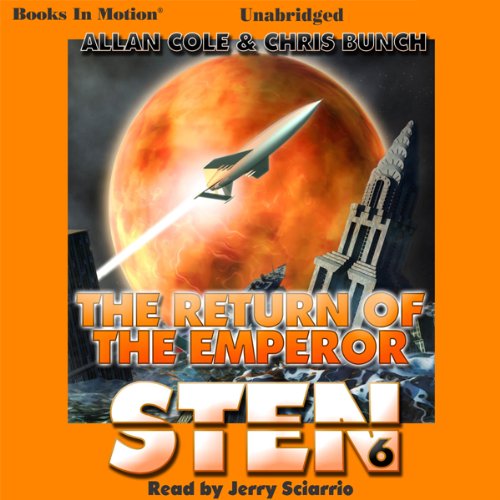 The Return of the Emperor

The Eternal Emperor was dead and the five members of the Privy Council ruled in his place. But they quickly discovered that their power would collapse around them if they didn’t locate the Emperor’s secret source of Anti-Matter Two, the economic keystone of the Empire. And so they sent a team of crack commandos to capture Sten, one of their late ruler’s few surviving confidantes. But Sten, as usual, had his own agenda. For he knew something about the Eternal Emperor that would shake the Empire to its foundations. And to play his part, all Sten had to do was kill the five most powerful beings in the universe.

What listeners say about The Return of the Emperor

Emperor will be back !!!

One more worthy add to the series.

Another good book with good narration. I like how the Emperor comes back. I backed it up and listened to that part again.

A good buy for any fan of the series, Book 6 has a much stronger story and tighter plot than Book 5. In fact, maybe the authors should consider the wisdom of deleting weak chapters from the final version of their novels. But, once again, the main problem with book 6 is with the narrator; who, admittedly does a much better job on book 6 than he did on book 5. It’s like he is sometimes struggling to see the text (maybe he needs his vision checked). For example: in an early entry he read, “ The emperor moved gracefully down the line as he - - ----- - - - had often done amongst his people.” It gets much worse as near the end of the book. To state it plainly, Jerry Sciarro, does a much better job of narrating than John Hough. I don’t know if the producer is saving money by switching narrators, but, the current narrator will drive away customers. I really don’t know if I like book 5 or not because it was so agonizing to hear. It really is a big issue, there is essentially a QC problem with the product. Give Jerry his money ------------please!

What made the experience of listening to The Return of the Emperor the most enjoyable?

Story was well paced and entertaining. Performance brought so much more depth and enabled listeners to engage with characters on different level

Which character – as performed by Jerry Sciarrio – was your favorite?

Unfortunately the switched performer for final book (book 7) and I was forced to return before end of first chapter.

I wrote about this for book 5. I have contacted Books in Motion about this. The production values and narrator of this book are so bad that Audible should refund our credits till the books are re-released with a proper narrator. (Jerry Sciarrio :-). LIstening to this at 2x speed and constantly jumping back to figure what the heck is going on, kept these two books from being impossible to listen to. I love the series and want to own it, But Not with this poor level of narration. Books in Motion, please correct this.