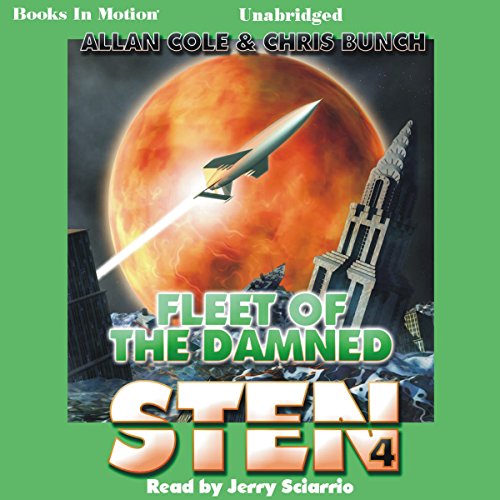 Fleet of the Damned

Fleet of the Damned

The Eternal Emperor's fleets were taking a beating. Had even Sten met his match? Sten's luck seems to have deserted him. He had barely scraped through Imperial flight school when he was assigned a tacdivision in the Fringe Worlds. The enemy couldn't have picked a better time or place to launch their long-planned attack against the Empire. But Sten won't give up without a fight.

This is just as I remember reading the book funny, great action and perfectly voiced.

Book 4 is the Cliffhanger

I wrote a review that said book 3 was the cliffhanger, but I meant that review for book 4. All are very enjoyable....but now we really need book 5 to be released expeditiously.

This book has lots of Action with Drama. It has a good story plot. The Narraction is very Good!

Such A Deal! I guess this is not the fleet of the

DARNED. Cause if it was the fleet of the Darned every one would be getting Sewn up in the Plotz as when the Plotz thickened.

If you read the book where the Plotz thickened You would know from where I spake. Look all that up in your Funk and Wagenal or not such as the case maybe.

Another good book in the series. This is a cliff hanger and as of today books 5 and 6 are still missing from Audible. When i sent an email concerning this i was given a responce of: book 5 and 6 are not available on audio book...really because they are for sale on Amazon.....