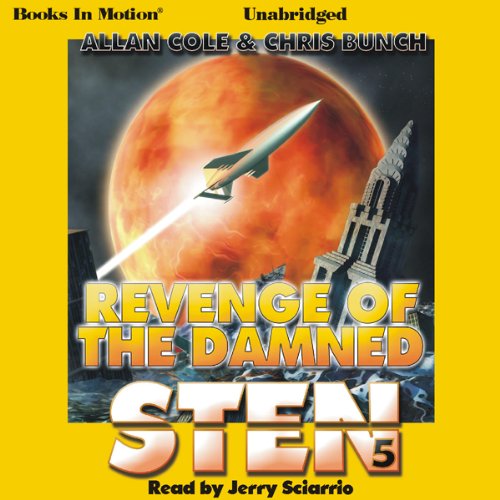 Sten: Revenge of the Damned

Sten had fully expected to die in a blaze of glory, taking his Emperor's greatest foe with him. Instead he was a slave laborer in a P.O.W. camp deep in the heart of enemy territory. But sitting out the action had never been Sten's style. And now that the war was building to a climax, the Eternal Emperor needed him more than ever. Not even the toughest prison in the known universe could keep Sten from his mission.

What listeners say about Sten: Revenge of the Damned

I just love the this series of books, each one is fun and easy to listen to.

One of the classics!

If you could sum up Sten: Revenge of the Damned in three words, what would they be?

The only problem with the series is that they released the books slowly and out of order. The story itself is good and understandable if a little live the roman empire in space.But in the space opera genre it is at the top of it's form.

the sten character Has the right amount of humanity for the hero type.

What does Jerry Sciarrio bring to the story that you wouldn???t experience if you just read the book?

This series does NOT Disapoint at all. Lots of Action and Drama. The Emperor is dead?? There is more to come. Great Book!

Great series, I just love it, and there must be the rest of the series Narrated by Jerry Sciarrio
Please Jerry Sciarrio book 6.7.8

I love these stories, but the author keeps using words that don't quite add up. such as light years for distances inside a solar system. Or galaxies for what are obviously supposed to be individual solar systems. it detracts from the overall picture.

Carrying on a Good Story

What did you love best about Sten: Revenge of the Damned?

I liked it, great narration. Good suspensful ending too.Cant wait to get book 6

What was one of the most memorable moments of Sten: Revenge of the Damned?

Have you listened to any of Jerry Sciarrio’s other performances before? How does this one compare?

I liked it, great narration