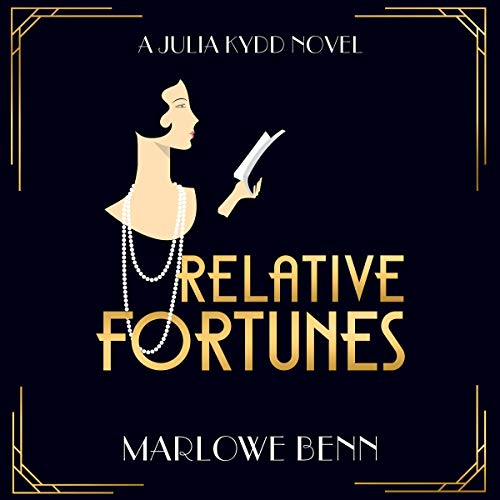 By: Marlowe Benn
Narrated by: Sarah Zimmerman
Try for £0.00

In 1920s New York, the price of a woman’s independence can be exorbitant - even fatal.

In 1924 Manhattan, women’s suffrage is old news. For sophisticated booklover Julia Kydd, life’s too short for politics. With her cropped hair and penchant for independent living, Julia wants only to publish books under her own imprint. But as a woman, Julia must fight for what’s hers - including the inheritance her estranged half brother, Philip, has challenged, putting her aspirations in jeopardy.

When her friend’s sister, Naomi Rankin, dies suddenly of an apparent suicide, Julia is shocked at the wealthy family’s indifference toward the ardent suffragist’s death. Naomi chose poverty and hardship over a submissive marriage and a husband’s control of her money. Now, her death suggests the struggle was more than she could bear.

Julia, however, is skeptical. Doubtful of her suspicions, Philip proposes a glib wager: if Julia can prove Naomi was in fact murdered, he’ll drop his claims to her wealth. Julia soon discovers Naomi’s life was as turbulent and enigmatic as her death. And as she gets closer to the truth, Julia sees there’s much more at stake than her inheritance....

“[A] stylish debut... The author effectively shows the casual discrimination against women at the time. Benn is off to a promising start.” --Publishers Weekly

“Set in the 1920s and framed by the quest for women’s rights and details about publishing and printing, this satisfying historical mystery includes a smart, feisty heroine and numerous plot twists.” --Booklist

“Fans of Agatha Christie novels will love this clever murder mystery, with a cast of suspects to keep readers guessing. Julia Kydd’s endeavour is entertaining and engaging to the end.” --Gemma Liviero, international bestselling author of historical fiction

What listeners say about Relative Fortunes

It took a little while to get into this story but once there I really enjoyed it. The setting, the mystery and the characters were very well created. The reason I couldn't give it 5 stars is due to the often long-winded tangents the story went off on. I found myself skipping through a lot of unnecessary descriptions of printing presses and fonts!! It didn't add anything to the story other than time.

I got 3 hours into this story and found it tedious. There seemed to be too many diversions into descriptions of art/literature for my taste. If the story was tightened by reducing it to ~70% of its length, it might be a reasonably good listen, but I've lost patience with it. Unfortunately, the experience was decidedly worsened by the narrator. She seemed to rush the delivery without a pause between sentences and paragraphs and with little inflection. Also, there was no distinction between the story and the diversions so that one was left wondering where one finished and the other started. This made it difficult to follow the thread of the story, particularly when doing something else whilst listening. I'll be returning it.

took a while to get into it, found narration a little flat. however an interesting listen.

This was an excellent story that touch many of the struggles that women had in the nineteenth century. Even with the approval of the vote women were still experiencing difficulties in politics and their families. Julia Kydd was a 24-years-old young socialite who lived an independent and sexual liberated life. She arrived in New York seventeen days before her 25th birthday at which time she would receive her inheritance. What she discovers is the machinations of her brother to withhold what was rightfully hers and that she was powerless to oppose him.

Julia was pulled into the family drama of her friend Glennis. Glennis is seeking marriage for security and to get her inheritance. More immediately, Glennis needs Julia’s help in discovering who killed her sister Naomi.

Naomi epitomizes the struggles of the 19th century woman. She fought for the women’s right to vote and operated a women’s shelter much to the chagrin of her family. She was from a wealthy family with a considerable inheritance controlled by her brother. Her family referred to her as poor old Naomi, crazy Naomi or difficult Naomi. She was forced to live in abject poverty because her brother did not approve of her life-style. Her family wanted a quick and quite resolution to her death while Glennis felt that something sinister happened to her sister and she wanted the truth. Be damn if the truth embarrassed the family. Julia became involved as a friend to support Glennis then as an option to secure her inheritance.

It is a wonderful story with great character development of Julia and Glennis. They began as innocence young ladies each on a different trajectory for independence. Glennis through marriage and Julia owning her publishing business. Naomi’s death forces them to face the harsh truth about their place in a male dominated society.

Excellent couldn't stop listening till the very end!! Thank you!

Excellent!!! More books please!! My eyes are going slowly so I have o been able to read as I love to , so this audible was a grand adventure for me!!

I read the Kindle and then listened to the audible version. I look forward to the second installment next year.

This audiobook - with excellent narration by Sarah Zimmerman - was something I had forgotten that I pre-ordered. So glad it landed on my list! It is very well written, with thoughtful details of the politics and the emotions of the time smoothly woven into the fabric of the story. Ms. Benn's main character, Julia, is urbane, intelligent, and a beautifully created character who questions her own education, status, and desires in ways that are plausible and insightful. It was a delightful read and I look forward to pre-ordering the next book in the series.

Benn 's first of what I hope are many more Julia adventures was such fresh fodder. This author has two jobs: 1)write the third Julia Kydd (4th, 5th...+?) and 2) tell her publisher or the writing interns at Kindle to write better synopses, because these books are so much more than, well, their covers.

I purchased this because I love both mysteries and historical fiction, but had never heard of the author, so wasn’t sure what to expect. Well written, with an engaging heroine and accurate period detail for this story set in 1920s era NYC. Hope this is the start of a series!

enjoyed listening it was intriguing mystery wrapped in history of women's struggle for equality well done.

Would not bother unless you can borrow from library and I hope the author improves over each effort.

Someone else will enjoy this

The story is well written. It is not something I enjoyed, but that is a taste preference. I think it was meant to be a psychologically slanted murder mystery set just after WWI. I found it slow moving, painfully pushing an antiquated agenda and dreary in tone. Someone else may find it historically relevant and psychologically intriguing. Best of luck.

I finished the book, but can't say that I really enjoyed it. The murder mystery turned into a secondary story with lots of twists and turns, overwhelmed by the feminist movement in the first quarter of the 1900's. Every character was affected and involved in some way. The narrator did an O.K. job. But, I never could develop a rapport with the characters -- either writing or narrating got in the way.