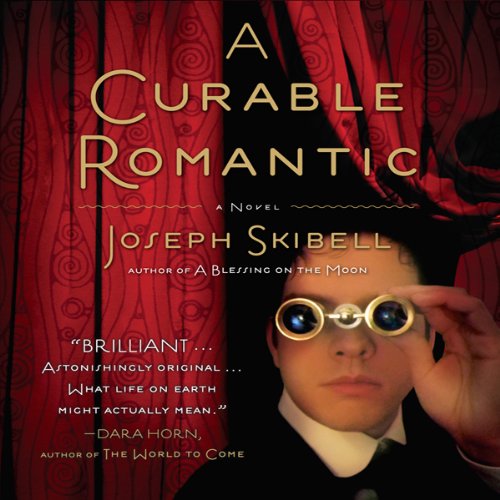 By: Joseph Skibell
Narrated by: Jeff Woodman
Try for £0.00

A Curable Romantic by Joseph Skibell introduces us to Jakob Sammelsohn, a lovesick oculist in turn-of-the century Vienna who chases romance and his own moral compass through friendships with three historic figures: Sigmund Freud, the founder of modern psychoanalysis; L.L. Zamenhoff, the idealist founder of the Esperanto language movement; and Rabbi Kalonymus Kalman Shapira, who led the Jews of the Warsaw ghetto in prayer and died with them in the camps. But it is Sammelsohn’s ongoing relationship with Ita, the disabled wife he was compelled to marry but left behind in the shtetl, that propels his journey and thrusts him into a world he thought he’d also abandoned: that of Jewish mysticism, with its conspiring angels and dybukks, those haunting and haunted souls of the dead that sometimes possess the living.

The first-person narrative is remarkably performed by Jeff Woodman, who finds detailed nuances of inflection and pacing to bring each of the novel’s vast range of characters  man or woman; sophisticate or rube; human or supernatural  to life. His imperious Dr. Freud, befuddled Dr. Zamenhoff, haughtily passionate Frau Bernfeld, and Ita, in her many shocking incarnations, are just a few of his convincing portrayals. Most of all, Woodman captures Sammelsohn’s painful and humorous propensity to over-think and vacillate, a la Woody Allen, especially about women (thus explaining why it takes him until his third marriage to lose his innocence).

As Sammelsohn’s journey takes him through several sub-cultures of Jewish life in Europe  from before the first World War until the apex of the second  he finds he is searching for a larger love, perhaps one of his own people. Skibell’s bright, soulful, imaginative storytelling is complemented by Woodman’s skills, and together they make listening to A Curable Romantic truly enriching. Elly Schull Meeks

As far as romance goes, Dr. Jakob Sammelsohn is fairly incurable. Twice married, once divorced, once widowed - all by the tender age of 12 - he finally flees his small village and his pious, vengeful father. A lovelorn Candide, young Dr. Sammelsohn wanders optimistically through history - pursued by the amorous ghost of his dead wife.

Arriving in Vienna in 1890, a chance encounter with Sigmund Freud leads our hero into the arms of Emma Eckstein, one of Freud’s most famous patients. Later he romances the beautiful and wealthy Loe Bernfeld, who carries him into the world of Esperanto and the universal-language movement. Finally, Dr. Sammelsohn finds himself in the Warsaw Ghetto in 1940, only to become a pawn in a battle over the path to heaven.

A Curable Romantic is a novel of personal and historical exile that could spring only from the literary imagination of a virtuoso. Often fantastical yet always grounded in tradition and history, it is that rare literary feat - a truly incomparable tale, ingenuously laid, peopled with characters who live on in the memory.

“This is a fascinating, ambitious, and very successful novel about Jewish folklore, the quest for spiritual truth, and the darkest days of the 20th century. It is to Skibell’s credit that this complex plot comes off as believable, engaging, and often inspiring. Highly recommended for readers of literary fiction.” (Library Journal)
“Skibell’s delicious juxtaposition of Sammelsohn against the cocaine snorting Freud, and Sammelsohn’s infatuation with the ‘cruel, vindictive, haughty, caustic, dismissive, even murderous’ character of Emma Eckstein, one of Freud’s patients, make for a magnetic collection of personalities.” (Publishers Weekly)

What listeners say about A Curable Romantic

I really enjoyed this audiobook. It follows a fascinating story through eminent figures and occurances in 20th century history and also paints a vivid picture of pre war Vienna. Well worth listening to and quite compelling.