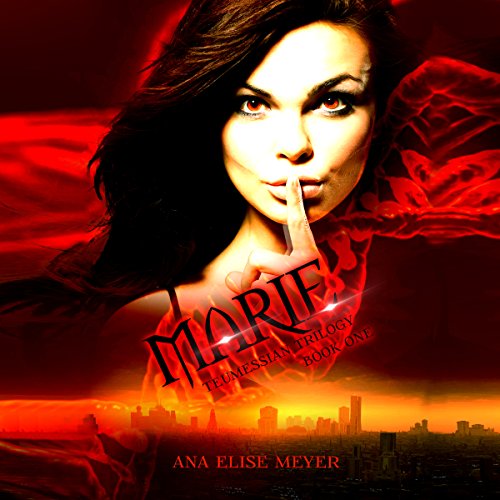 By: Ana Elise Meyer
Narrated by: Lori Faiella
Try for £0.00

The human search for a solution to disease and physical decay has driven many to go to extreme measures. Dr. Carl Stanley's efforts are no exception, his creation, Marie becomes the picture of physical perfection; possessing the ability to heal at a rapid rate. She has been groomed from infancy to apply her gifts in the service of war. However even a woman given all the physical gifts in the world is not immune to pain and suffering. One can only be pushed so far before pushing back. Can they handle what they have created? Can she?

Sometimes the cure is far more dangerous than the disease....

What listeners say about Marie

This book is pretty intense thrill ride. Readers/listeners are introduced to an abandoned baby girl who is experimented on and trained to be a super-soldier prototype. The training and the lifestyle that come with it. Marie's attempt to get away to a normal life is thwarted, and all hell breaks loose as the bloodbath begins.

When scientists try to search for a solution to disease and physical decay they start doing experiments on male babies, that is until Dr. Carl Stanley finds a crying female baby behind a dumpster and decides to include her in the program, what they get then is Marie. She excels at the program and becomes "the picture of physical perfection; possessing the ability to heal at a rapid rate" Out of the 10 babies injected over time, she stands out, both in her attitude and behavior. She doesn't just act when told, she thinks more and seems to have more of a conscience than the 9 boys. As they grow up, she becomes friends with a particular child but he is taken from the program as he shows no signs of special abilities. She then finds herself drawn to Michael, the leader of the group. When something happens to destroy Marie's life, she shows the people who "made" her, exactly what she can do!

Plot wise, initially, I wasn't sure whether I'd enjoy reading this as the subject was kids being part of an experiment, but thankfully they were never mistreated and they were looked after, they were just injected everyday with a serum. Also we jump from them being babies to being adults quick enough that it doesn't really register. This book is so incredibly fast paced and intense, that I was on the edge of my seat the whole way through. I listened to it in a day and didn't want it to end. The idea of a super soldier, one capable of anything, and the consequences of what happens when they go "rogue" made for an amazing read!

Marie was kick ass! She started out as a conscientious person but when her life is destroyed, she shows exactly what she can do, and boy that girl was bad! My heart broke for her and what she became! You know why she did the things she did, but it still made you feel for her.

Anyway, this was an action packed, intense and addicting read. I didn't just read it, I devoured it and look forward to more!! Well written, developed and entertaining, this is a must read.

Lori Faiella did a really good job with the narrator. She brought Marie to life and really made the story pop.

*I received a free copy of this. This in no way affected or influenced my thought.*

Marie was a good book.Lori Faiella was a good,not great ,narrator.In an underground bunker 10 babies are being injected with a serum to make the ultimate warriors.They are to have no attachments and be willing to die for the mission.Things do not go as planned.I was provided this book free by the author,narrator or publisher.

I'm not sure how I feel about this book to be perfectly honest. I liked the idea behind the story, it reminded me at the start of the old TV series The Pretender. So, the story was fine, but lacking something and I had problems with the characters. Now, some of the problems I had were somewhat explained by the end of the book, but I could have wished that the points were covered earlier. To me, the scientists were really dumb. They had 9 men and one woman; only the woman produced any results and only after she became pregnant. My first thought was - why did they not suggest maybe the drugs they were injecting their subjects were looking like they would work on the second generation genes then the test subject?

The group of 10 test subjects seem to have been trained as soldiers to work together - or that was the idea - they never seemed to have gelled as as a team, and definitely did not stick up for one another very much. As well, Marie is being portrayed as a typical female who rather than being tough and hard shell, warrior, breaks down when one of the others die ....

Another problem I had with Marie was when she was attacked after she left the program. She had a child that by description she was devoted to, wouldn't let out of her sight, very protective. She gets told that the men killed her son, so when she escapes she doesn't even go and check on her son to see if the men were telling the truth, even after all her dealings with the group who had kept her a prisoner all her life and trained her?

The other character I had a problem with was Tyler - he was really young and naive to be a Major in the Army, and you would have thought Marie would have been more suspicious of him - although that was explained later.

The narrator's voice was a little stilted for my liking. I don't know whether this is her natural voice or the voice she thought Marie should have; also the author didn't use a lot of contractions in her wording that I found a little irritating.

However, I did find the plot of the story interesting if the author could have developed it a little more (I don't know how many other books the author has), and interesting enough that I am looking forward to listening to the second book of the series to find out what happens next, and how the author has improved her writing.

The main character is sympathetic. It's very fast paced and full of action. However, I thought the story was a little weak and didn't like the ending much.

The narrator was fine, but I had some problems distinguishing between different male characters who sounded similar. I think she could have done a little more to differentiate between them.

Lot's of Action (and swearing)

I'd give it a happy ending.

What was one of the most memorable moments of Marie?

When she realizes her full abilities. I love books about people's with abilities. This could have been a graphic novel

I thought the narration was decent. Good pacing, and she has a nice voice. I wish the narrator had more range with her voice, but she was not bad.

Warning, this book has tons of profanity, so if that bothers you. I received a free copy of this book in exchange for an honest review.

Lots of twists and turns

I received book for an honest review and honestly, I liked the story enough to move on to next book. I did have a little trouble following all character names on the beginning and I felt the Dr Stan link was rather weak. No follow up on why or past history. I did not feel as if Marie cared for him, and maybe it should have been this way. narration was ok. she had different voices but at times it was not smooth. The end was a shocker. This wasnt a who done it, or a mystery or suspense or romance, kind of hard to classify but would recommend anyway.

Not Alot of Cohesion

I really wanted to like this book, but it just lacked something. The premise is that a group of kids are taken and experiments performed on them. It is never really clear what the reason is. Or maybe I just didn't get it.

The story starts with someone finding a crying baby behind a dumpster and he hands her over to whoever these people are that are doing the experiments.Marie is that baby and the rest of the kids are boys. It kind of just jumps from childhood to adolescence to adulthood without much character development.

The writing was choppy. It sounded unnatural. I don't think the author used a single contraction, so the dialogue just didn't flow.

I thought Lori Faiella did a good job with what she had to work with. It's difficult to make a story compelling when it misses the mark so entirely.. Her voice is pleasant and easy to listen to. If it hadn't been, I probably would not have finished the book. I just didn't care enough about the characters.

This book was gifted to me for an honest review.

Amazing book... till the end

Loved this book could have listened to hours more. The biggest disappointment was the ending. I will not spoil it for you but for me it was not what I wanted nor expected and seemed like an excuse to end the story sooner then needed.

I received the book free in return for a unbiased review. thanks

I found this story cheesy and didn't really feel the ending matched. Maria is a woman who is experimented on, she escapes, suffers loss and somehow without any real explanation becomes an entirely different person in character.

It lacked much setting or explanation for the events. I don't like over explanation but feel some is necessary for a cohesive story. I thought at first it was simply the narrators computer sounding voice but after thinking it over and relistening to parts I think the story is just choppy and too cliche.

If you love action, adventure and deadly women than you might very much enjoy this story but it wasn't for me.