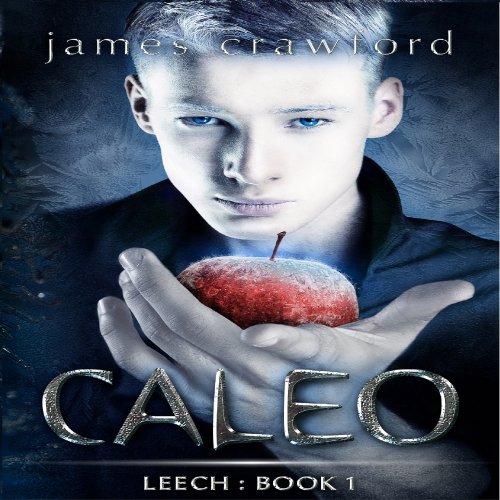 By: James Crawford
Narrated by: Jason Lovett
Try for £0.00

Every High School has their social outcasts. The band nerds, the math geeks, the chess club, the girl that chews her hair, but at Butler High, even the creepy nose picker in the chess club is more popular than Caleo Anima. No matter what he did, his pale skin, snow white hair, and piercing blue eyes always made him an easy target. He used to think that the only way things could get worse would be if someone found out that he was gay, but that isn't even the tip of the iceberg of problems after a mysterious stranger shows up and changes Caleo's life forever.

Hidden amongst our society, a secret and magical race of people known as 'Leeches', have been engaging in civil war for decades. Both sides are desperately searching for a weapon with unlimited power that will give them the advantage they need to rule their world. This wouldn't mean anything to Caleo, except for one problem...He is that weapon!

Forget making it through High School. Caleo has bigger problems! As the search for him goes on, the world is quickly crumbling around him. He's now fighting for his life and the life of what little family he has left. With the help of new friends, he has little time to try and master his newly found powers as he tries to figure out who he can trust, who is trying to use him, and who just wants him dead. One wrong step and being the awkward pale outcast will be the LEAST of his worries.

What listeners say about Caleo

A bit cliche but the stories fine, the narrator has a bit of a lisp, not too noticeable

loved it. im downloading next instalment straight away. its gona be a long night ...

First, this was an audiobook and I felt that the narrator did an excellent job bringing these characters alive. I was immediately enraptured in the lives of Caleo, Jack, and Jillian. I felt Grandma was a hoot and a half. This book is fast-paced, full of adventure, heartache, and love. Though some reviewed that Jack was a horrible character, I did not feel that way. I understood where he was coming from, even if I would not have behaved the way that he did. Caleo was a true hero and his journey is one that I enjoyed following. Looking forward to reading Jack...

After reading the description for Caleo, I thought I’d be in for a great read. There’s a great story to the book that is great for fans of paranormal books. It also has a main character who’s gay. Even in the modern and diverse world of today, this isn’t found in many books (though there’s a growing amount of releases to explore). This was new territory for me and I was looking forward to this change from the “norm.”

While I thought the book sounded great, there are aspects that fell flat for me. The main thing was the writing. Even with a great concept to a story, the writing is what’ll hook a reader. I feel that while it wasn’t horrible writing, or anything like that, it was lacking. There weren’t grammar/spelling issues to make mention of, but another round with an editor looking out for word redundancy might have been useful. I found many instances where the same noun was used in one sentence, then the next. This felt awkward and the use of “it” would have felt much smoother and less repetitive. The frequency of this occurrence irked me.

There wasn’t as much depth to the characters, even the main characters. I felt I wasn’t getting enough to sympathize with them through all the obstacles they faced. I also thought the reactions/emotions of most of the characters were unrealistic. Without getting into specifics, something big happens, and instead of devastation and an ok, now we need to man-up to survive” reaction…the characters feel bad for a few minutes but revert back to an almost “everything’s ok, our lives haven’t changed drastically” attitude.

On the other hand, there were aspects of the story that kept me intrigued until the end. While I didn’t feel it played out as well as it could have, or expanded into (for me) a more enjoyable storyline, it still kept me reading. The variety of abilities the leeches have is great. There are abilities I’ve never thought of before, and in a culture full of superheroes and paranormal characters, that’s hard to come by. I liked some of the characters as well, especially Nolan. His power was great and the complications he brought to the story were also great. The way the book ends was intriguing as well, making me want to see how this story will continue.

In the end, this was a good first novel to a series. Grabbed me enough to want to read the second book. crawford, in my opinion, has some things that could be improved or expanded on, but maybe book 2 does just that.

I love the series, I own all the books, simply amazing work. I have read the books 12 times and listened to the audio books 3 times while driving. I wish there was more

I read the summary and thought “this, this is what I’ve been looking for”. After starting the first couple chapters I was confused and lost in where the book was going but then once I read a little further it all came together and I was instantly hooked.
To me it felt like gay X-Men meets apocalypse with a YA coming of age story. It’s beautiful, exciting and captivating.
My cons: the book is a little slow to start, and the transition between calm movements and fight scenes is so sudden it catches the reader off guard. I’ve had to rewind at least a dozen times to figure out how we went from a school dance to a character getting shot LOL.

All in all, this has made my list of all time favorite books, the author and narrator have done an amazing job❤️

This is a really great story that I've read numerous times. It was nice to hear it read. There are some odd mispronunciation issues but Lovett does well with conveying emotion without horrible volume issues (like when a narrator yells when I'm trying to relax.)

The premise of individuals with special powers brought forward by 'Near Death' episodes is interesting. The unique powers portrayed are also engaging. It however takes too long for the main character to come into his own.
The plot becomes disappointingly apocalyptic with mundane hand and gun violence as the governing actions.

a intriguing story, could have been made better by some light editing and a more enthusiastic reader.