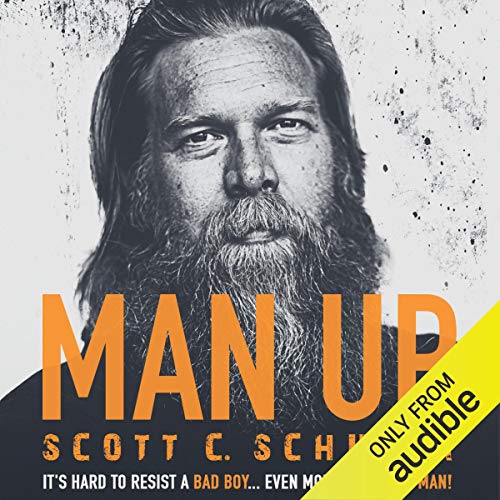 Trust me: the world doesn’t need a bunch of BFFs with beards.

I’ve watched men change from confident, decisive, and action-oriented lions to second-guessing, scared-of-their-shadows, don’t-rock-the-boat mice. They don’t feel confident in relationships, work environments - or anywhere. Men are either looking for something or running from something; maybe a bit of both.

Well, it’s time to stop running. It’s time to "man up" to face the real issues.

Being a real man is about being true to yourself first. It means finding strength from living authentically and then sharing that strength with others. Being a real man means understanding who you are and how to influence the world for the better. A real man is an asset to those around him. He doesn’t have to take charge, but he leads the charge, and people want to join in. A real man draws people in. In fact, he is completely irresistible.

It’s time to Man Up!

What listeners say about Man Up

If you have a man in your life ... make sure he reads this! Life changing! If there was an option to rate this higher than 5-stars...I would. (It should go to 11!)

My highest recommendation to all men to not only read...but to internalize, embody, and implement in their lives!

Every guy should take the experience and wisdom from this book, and step-up &amp; execute in your daily life.

&quot;Excuses get easier to default to each time you use them. The value I placed on my goal was higher than not achieving it.&quot;

&quot;Over time, small, insignificant choices add up to big results, either good or bad ... Think of the word 'because.' By simply using this word in a specific way, it can change your habits. Use 'because' to attach value to why you are doing it. I go to bed earlier now because I want to show my boys that their dad takes the time to take care of himself.&quot;

The first few chapters of this book we're alright, but it rapidly goes down a spiritual and business rabbit hole. I went in thinking it would be an interesting read about masculine roles in society, so maybe that was my initial disappointment when I got a career advice book. The advice in this book is basic common sense. Things like, "Don't quit your job before you have another job". I completely lost interest when the author started interviewing a multi-millionare, pyramid scheme running, essential oil salesman about what it means to be a honest man. That's advice that shouldn't be taken seriously.

good but a little too much faith based

good for the most part but leans to much on faith. I am not interested in that side.

This is the book that men no matter what age should read. If you believe in the value of values and you think no one else does read this book!!!

I met Scott about a year ago, shortly after listening to this the first time. I can tell you Scott is in real life just as he appears in this book. Scott’s no nonsense and no bs attitude is 100% real and true to life, as well as a larger than life demeanor. He is someone that all the men in our group look up to, both figuratively and literally. This is a phenomenal book that I have recommended to many already.

Very well narrated, except for the interviews provided at the end of each chapter. Content about "Manning Up" is slightly more high level vs. tactical advice on how to. But the message was great. Definitely worth a 2nd read / listen.

Hello, the book is great, I am very much enjoying it, but can you do anything about the background noise?

Great book for manning you up.

This is a simple book. Put it in your mind to be a good husband, father, and friend in the most simple respected form. put in hard work nomatter what your doing. be patient and loving towards your family members. be strong minded, be a good listener! Be a good friend to those around you. Carpe Diem

The interview process was a little hard to follow. If I wasn't paying close enough attention I would lose track of when Scott was speaking and when his interviewee was speaking. Overall this was a great listen and would recommend it.

Another stupid book I regret buying

So what’s this book about? I don’t know. It’s just some guy talking Sh!t without any depth or any point to it. I learned nothing I didn’t know when I was 16 and in high school. Just boloney!