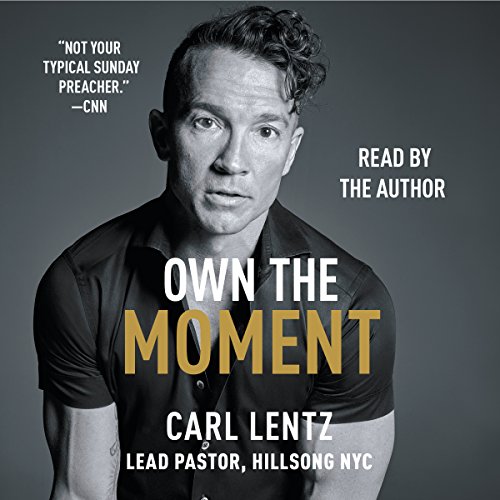 When you think of a Christian pastor, you probably don't envision a tattooed 30-something who wears a motorcycle jacket, listens to hip-hop music, references The Walking Dead and Black Lives Matter in his sermons, and every Sunday draws a standing-room only crowd to a venue normally used for rock concerts - in godless New York City, no less.

But then you clearly have never met Carl Lentz.

As head pastor of the first United States branch of global megachurch Hillsong, the former college basketball player is on a mission to make Christianity accessible in the 21st century. In Own the Moment, he shares the unlikely and inspiring story of how he went from being an average teenager who couldn't care less about church to leading one of the country's fastest-growing congregations - how one day he is trying to convince a Virginia Beach 7-Eleven clerk to attend his service, and just a few years later he is baptizing a global music icon in an NBA player's Manhattan bathtub.

Amid such candid personal tales, Lentz also offers illuminating readings of Bible passages and practical tips on how to live as a person of faith in an increasingly materialistic world. How do you maintain your values - and pass them on to your children - in a society that worships money and sex and fame? How do you embrace your flaws in this Instagram era that exalts the appearance of perfection? How do you forget about "living the dream" and learn to embrace the beauty of your reality?

These are just a few of the many important questions Lentz answers in Own the Moment - a powerful book that redefines not just Christianity but spirituality as a whole.

What listeners say about Own the Moment

Great book, loved it then found out he had affair

awesome book,.read it a while back and planned to again. was gutted to hear that he has now been caught having an affair and now don't want to encourage people to read it.

Loved it. Encouages a perspective shift on your day to day life and almost every story ps Carl shares parallels moments in your life and makes you think of a different way of seeing them

This is book is phenomenal!!!

This book is a must read for anybody so struggle with confidence when it comes to sharing their faith with others.

I hope this whole book stays in my head forever. What a genuine, kind, incredible man.

Candid, to the point and thought provoking! Carl Lentz always speaks so well this book is no exception- what a guy!

Carl Lentz is phenomenal. Simply put, this book is a game-changer. He writes (and speaks) with authority and authenticity. His integrity, honesty and passion pours out of the pages. I love what Carl & Laura are building and I hope one day to meet them in person to thank them.

Read this book. It could change your life.

“This man eats with tax collectors and sinners”

Right from the get go this book is challenging, thought provoking and authentic. I’d only ever heard one of Carl’s sermons prior to purchasing the audiobook and probably heard more scathing remarks from people that questioned the kind of Christianity that Carl represents when he “hangs out” with celebrities. He actually addresses this in the book and left me with no doubt that his godly influence in these circles is exactly why he stands out from the religious elite, just like the Jesus he loves and follows.

Thanks Carl for just being real.

Any person in any walk of life will be triggered, one way or the other, by this book. Carl communicates brilliantly and preaches Jesus without any filters!

The stories told in this book are both challenging and inspiring. I'd highly recommend this book for any stage of life.

Could not keep my interest

This book seemed like he was just all over the place and really didn't have that much to say ... just seemed like babble to me. I realize a lot of the reviews on here are 5 start &quot;life changing&quot; but I must admit I'm baffled. I cannot understand what they are getting out of it at all.

It seems like a lot of pastors are writing books these days. A lot of those books are fluff and just a pep talk. This is NOT one of those books! Carl does a great job of giving a glimpse into his life and the things and ideas that have helped him in his journey. I’ll be using his learnings and making a lot of his practical ideas my own. He was and is honest about his life— the good and bad and honest about moments he did and didn’t own. It’s really refreshing to hear stories like this. Grateful for that especially in a time where honesty isn’t what is happening among our Christian leaders, Carl bucks the norm to be a change agent.

maybe for teenagers, but adults will be bored

Maybe it's cultural or generational, but I'm 58 and this book was like listening to a very uninteresting child

Was fab then judgement had to even the score

The book begins with Lentz saying it is for everyone no matter what they believe. Then he uses space on diversity. Yay! My heart breaks in the last chapter where he says his Buddhist-friend’s belief are not the right way. It is as he backtraces everything “wrong” he might have written. I loved this book because it is unlike any book written by a Christian Pastor. I lam a Buddhist who loves Jesus. Buddha never asked to be worshipped. Keeping the book though.

this book will challenge your view of life

If you could sum up Own the Moment in three words, what would they be?

What did you learn from Own the Moment that you would use in your daily life?

have a look at people completely different.

I feel that Carl communicated clearly how most likely Jesus would treat and respect others if he were walking on the earth today. The book will definitely cause you to reflect on how you treat others.

A book only Justin Bieber's pastor could write.

This book is an utter mess. The author is a very controversial and divisive figure in contemporary American popular culture and Christianity. He is the lead pastor of the New York branch of Hillsong Church, a Pentacostal church based in Australia. Hillsong NYC is known as the "hipster church", due to the fact that its clergy wears Supreme and peppers their sermons with pop culture references - essentially proving that Christians are the masters of cultural appropriation.

The self-help genre has always been full of ego, and this book does not disappoint. The author constantly goes off on tangents where he strokes himself and then tries to make light of the situation by weaving a tale of self depreciation and bringing it home with a little bit of biblical parable. There is a little bit of advice, but the book is mostly a series of tangents, which is very disappointing. If one is to own the moment, a story about combing through the garbage covered streets of New York only to find an alcoholic homeless person, and then inviting said homeless person to come to church with the promise of a beer during service is hardly going to help anyone. Rather, it is nothing more than an opportunity for the author to humble brag and go off on a tangent about how awesome he is, but he knows deep down that he is a piece of whale dung, but at least he is not the whole turd, and btw Jesus and all that jazz...

The author also makes a point to dismiss beliefs held by other people as well. He tries to soften the blow by saying that so and so is a friend, but they really could use some Jesus in their life because their beliefs are wrong. He also judges another friend for getting a divorce. Not only that, but he has the audacity to say that premarital sex is wrong, yet he admits that he was sexually active before he met his wife.

Not to attack the man personally, but he is no different from any other closed minded Christian in that regard. He may be a "cool" pastor who rubs elbows with Hollywood's current crop of darlings, but he is still proselytizing the same old message with the same old song and dance. I really cannot in good conscience recommend this to anyone, as I have made it clear that this book was a haphazardly arranged, narcissistic compendium of utter nonsense.

Brilliantly written book by Carl Lentz. A guys who is defying critics and logic by genuinely loving people to wholeness . This book is a must read and with an open heart will impact every reader / listener!

This book is a must read for anyone who wants to make the most out of today, and live a life of greater purpose.

Everyone should listen to or read this book

Would you consider the audio edition of Own the Moment to be better than the print version?

I haven't read the print version but since Carl Lentz is a preacher, he does a pretty fantastic job of narrating this story. I listen to parts of this book all the time.

Jesus. He is driving the message here (behind the scenes but he is the source)

Have you listened to any of Carl Lentz’s other performances before? How does this one compare?

This book makes me want to go out and be nice to people. That is why I am a frequent listener. It keeps me grounded, makes me want to exude love and reminds me to be open to other people's points of view.

Not what you think

This book is what you need if you started a walk and turned away. Empowering and real. A real world approach to Faith.