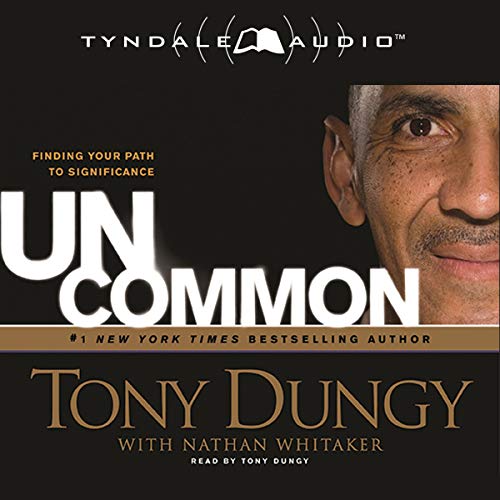 Super Bowl-winning coach and number-one New York Times best-selling author Tony Dungy has had an unusual opportunity to reflect on what it takes to achieve significance. He is looked to by many as the epitome of the success and significance that is highly valued in our culture. He also works every day with young men who are trying to achieve significance through football and all that goes with a professional athletic career, such as money, power, and celebrity. Coach Dungy has had all that, but he passionately believes there is a different path to significance, a path characterized by attitudes, ambitions, and allegiances that are all too rare but uncommonly rewarding.

Uncommon reveals lessons on achieving significance that the coach has learned from his remarkable parents, his athletic and coaching career, his mentors, and his journey with God. A particular focus of the book: what it means to be a man of significance in a culture that is offering young men few positive role models.

Great book and even more a great product to use as study material in your men's bible study. We enjoyed the Coach, his smooth and insightful Christian approach truly exemplified our need to have God's hand in our life. Well done!

Intended for men, but great for everyone!

Tony is clearly speaking to men, but there are tons of practical applications for women as well. I want to have my young adult sons listen to this!

Great listen for those that want a different perspective

Tony Dungy one of the football coaching greats does a phenomenal job outside of football as well. This book truly does show you how to be uncommon in all aspects of your life. He has lived these experiences and shares them with us in a way that helps us to see where we may fit in in an uncommon way. It is more about finding your true path in life then telling you to follow a certain blueprint for success.