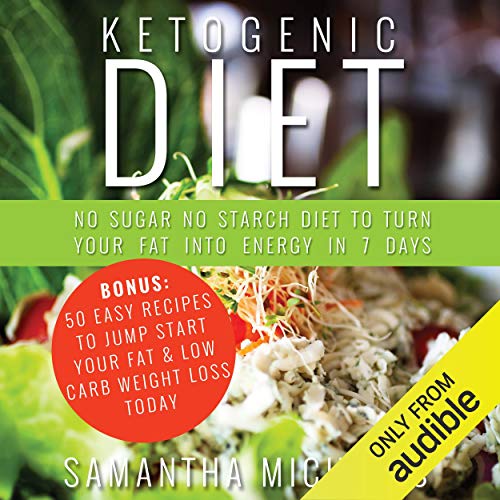 Ketogenic Diet: No Sugar No Starch Diet To Turn Your Fat Into Energy In 7 Days

Diet, by definition, is the type of food consumed in a certain period. It can be as simple as an average daily meal. It can also be part of a treatment program for medical conditions. The ketogenic diet has long been used in the treatment of epilepsy in children. Recent findings showed that it has other benefits aside from controlling seizures. Since its introduction in the 1920s, the ketogenic diet remains controversial until today. How can seizures and other neurological disorders be controlled with a simple diet? The exact mechanism may not be known but the results of years of research are staggering. Several other benefits are also found with the ketogenic diet. One of which is for weight loss. Burn fat by eating more fat is what they say. That is the running version of weight loss programs that incorporate a ketogenic diet. In this audiobook, Ketogenic Diet: No Sugar No Starch Diet To Turn Your Fat Into Energy In 7 Days (Bonus: 50 Easy Recipes To Jump Start Your Fat & Low Carb Weight Loss Today), learn more about the ketogenic diet today. Listen to its original purpose and the many other benefits that has stemmed from the many research done on ketogenic diet.

What listeners say about Ketogenic Diet: No Sugar No Starch Diet To Turn Your Fat Into Energy In 7 Days

I Need to Learn More About this

I was unfamiliar with the Ketogenic Diet before listening to this. I will need to do further research on this since several of the recipes were contradictory to what was actually being stated in the book...for example it states to stay away from sugar, mayo, onion, peppers, tomatoes, etc...but the recipes provided, several had these in them. I am glad that I have listened to this book and having a new concept brought to my attention, so that I may learn about it and the proper do's and dont's

Simple and clear, but no story to link concepts

What disappointed you about Ketogenic Diet: No Sugar No Starch Diet To Turn Your Fat Into Energy In 7 Days?

The author lost the opportunity to ilustrate the concepts of the Ketogenic diet with a story, for example of somebody that had specific problems/pain points and did the ketogenic diet.

What was most disappointing about Samantha Michaels’s story?

There was no story.

Who would you have cast as narrator instead of Caroline Miller?

What character would you cut from Ketogenic Diet: No Sugar No Starch Diet To Turn Your Fat Into Energy In 7 Days?

there is no character

the recepies are useful!