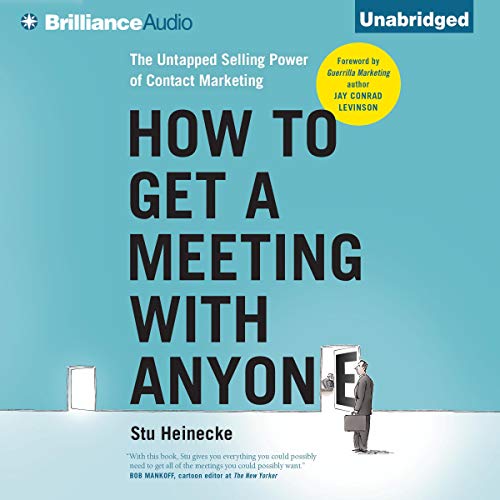 How to Get a Meeting with Anyone

The hard part just got easy.

You know how to sell - that's your job, after all - but getting CEOs and other VIPs to call you back is the tricky part.

So what if that impossible-to-reach person weren't so impossible to reach after all?

Hall of fame-nominated marketer and Wall Street Journal cartoonist Stu Heinecke discovered that he could get past traditional gatekeepers and reach those elusive executives by thinking outside the box and using personalized approaches that he calls "contact campaigns". Including presidents, a prime minister, celebrities, countless CEOs, and even the Danish model who later became his wife, Heinecke found that getting meetings with previously unreachable people was easier than ever.

In How to Get a Meeting with Anyone, Heinecke explains how you can use your own creative contact campaigns to get those critical conversations. He divulges methods he's developed after years of experience and from studying the secrets of others who've had similar breakthrough results - results that other marketers considered impossible, with response rates as high as 100 percent; ROI in the tens, even thousands of percent; and costs per contact ranging from $0 to $10,000. Through real-life success stories, Heinecke lays out nearly two dozen categories of contact campaigns that anyone can research and execute. Tactics range from running a contact letter as a full-page ad in the Wall Street Journal to unorthodox uses of social media, the phone, email, and snail mail to using his own cartoons to make connections. He also packs in plenty of tips on how to determine your targets, how to develop pitches, and how to gain allies in your contact's circle of influence.

How to Get a Meeting with Anyone provides you with a new toolkit you can put to work for you right away, so you can make the connections that are essential to your success.

What listeners say about How to Get a Meeting with Anyone

Avoid if you are an entrepreneur

Yes and no. Great ideas but the author talks about crap over and over without getting to the point. Business is fast, structured and accurately executed however this was not written to fit into the business book parameters.

Great ideas to get a meeting.
Badly written.

Could you see How to Get a Meeting with Anyone being made into a movie or a TV series? Who would the stars be?

Full of fillers. Can be summarized in 5 min.

One of the worse books I listened too. The book can be summarized in "gather a list. Target, be personal and memorable.". The rest of the book just goes back to say that again and again. I gave up after chapter 6.

Probably better in print or kindle

For a good chunk of the book it's nothing but him reading website URLs. Not what I want to hear in an audiobook.

If You Love Selling, You'll Love This Book

I think anyone who's really good a getting through to new business contacts, would agree, we're always looking to do better and improve our chances to win new professional relationships.
This book is my latest discovery of how to do that!
Enjoy!

Field guide for marketing in the Age of AI

As a marketing consultant who specializes in lead generation to drive 6- and 7-figure deals, I have to say this book is absolute gold.

Over the last 2 years I've seen the difficulty of reaching prospects increase dramatically due to what I call the AI Wars:

- More and more companies are using AI-driven sales automation tools that promise "sales at scale." These tools generate a HUGE amount of noise.
- As a result platforms and prospects are fighting back by creating algorithm-based, AI gatekeepers that screen out most contact attempts. (For example, Google recently launched AI filtering that can kill a cold email campaign before you even contact 30 prospects.)

The solution for this is to stand down the bots and go old school. Connect human to human. Ship molecules instead of pixels.

I was *really* excited when a friend recommended this book, because it spells out exactly how to put together this kind of high-touch, highly personalized campaign.

Two reasons I love it:

First of all, it helps you get into the right mindset to effectively reach high-value prospects. You learn to see the world through their eyes, and consequently how you can get their attention.

Second, it's extremely actionable. I took several pages of notes, including specific tactics that are easy to modify for whatever scenario you're facing. I've already used several of these to successfully book appointments for my clients.

If you're finding the "best practice" digital marketing techniques aren't working like they used to, this book is the solution. I'm going to be buying copies to give away to friends and clients.

Great content with properly structured application and resource instruction. I like books that begin improving business model as soon as you read them.
My word quote for this piece is tangible!

I re-read and listened to this book 3 times

best actionable advice I have read in years. thank you Stu. tremendously easy, fun, and will add $2,000,000.00 usd to my personal income quickly

Fue un audio que te abre la mente y te hace ver el marketing de una manera diferente.
Also, it made me think about some things that are obious, but not all the people do.

Contact Marketing: This book is Full of Great Info

This book is so full of ideas, it hurt. I got tried of taking notes and wondered how I could implement it all. One Bite at a time, there is a lot of info crammed into this book. Worth every penny I paid.

Stu's cartoon gave him 100X return. And he sure did drive that point home in the book. But the book is much more about how you can also use his ideas to reach whoever you want to reach. It's all about thinking outside the box to get to whoever you want to get. Great book overall!

Okay, but a bit repetitive

I loved the idea of this book, offering anecdotes on how to connect with your targets. The stories were compelling, but the examples feel quite dated, such as the reading/spelling of various web sites where you can find target data (put that in the book notes). Also seemed like many of the anecdotes boiled down to "send them a customized cartoon", which isn't totally applicable to a non-media based sales process.