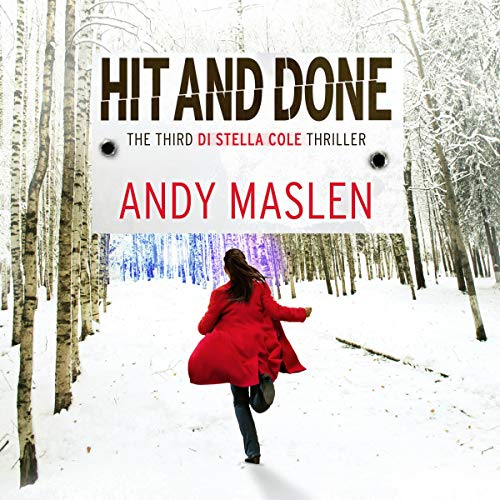 Detective Inspector Stella Cole has almost completed her bloody quest to avenge the hit-and-run killings of her husband and daughter. Only one member of the legal conspiracy who murdered them remains. But he happens to be her boss: Detective Chief Superintendent Adam Collier. And he’s not going to go down without a fight.

His first move is to have Stella sectioned. While she’s incarcerated in a psychiatric hospital, he hires a Maltese woman to kill her. Monica Zerafa is fearless, brutal, and hungry for the cash Collier’s promised her.

But neither Collier nor Zerafa has reckoned with Stella’s violent alter ego “Other Stella”. What’s worse for Stella, this split-off part of her personality is growing stronger by the day. She wants control.

The non-stop action switches from London, to a gangster's palatial home in rural Essex, then to Canada and an Ojibway reservation, and Chicago, before the final, bloody climax in a frozen Minnesota.

Hit and Done is the third book in this hyper-violent trilogy about love, revenge, and what a mother will do when pushed to the edge of sanity. The body count keeps on growing as Stella confronts all the people who want to harm her and metes out her own special brand of justice.

What listeners say about Hit and Done

From the 'loony bin' to Chicago she travels with a teensy bit of heartstopping action in between, and then ... well, listen to it and find out for yourself.

I love these books so I may be biased but all I'm going to say about this one is that it's the best book I've 'read' in years. It's triumphant, and Helen's narration only adds to the drama and the suspense, it's all so moving and heartpounding, it really is a magnificent book and I totally recommend it.

This has so far been a series of extraordinary experiences. Andy Maslen has quickly moved up on my "Favorite Authors" list. And Helen Moore...what can I say! Her narrative talents totally adds to the drama and excitement throughout the story! I'm looking forward to the next release.